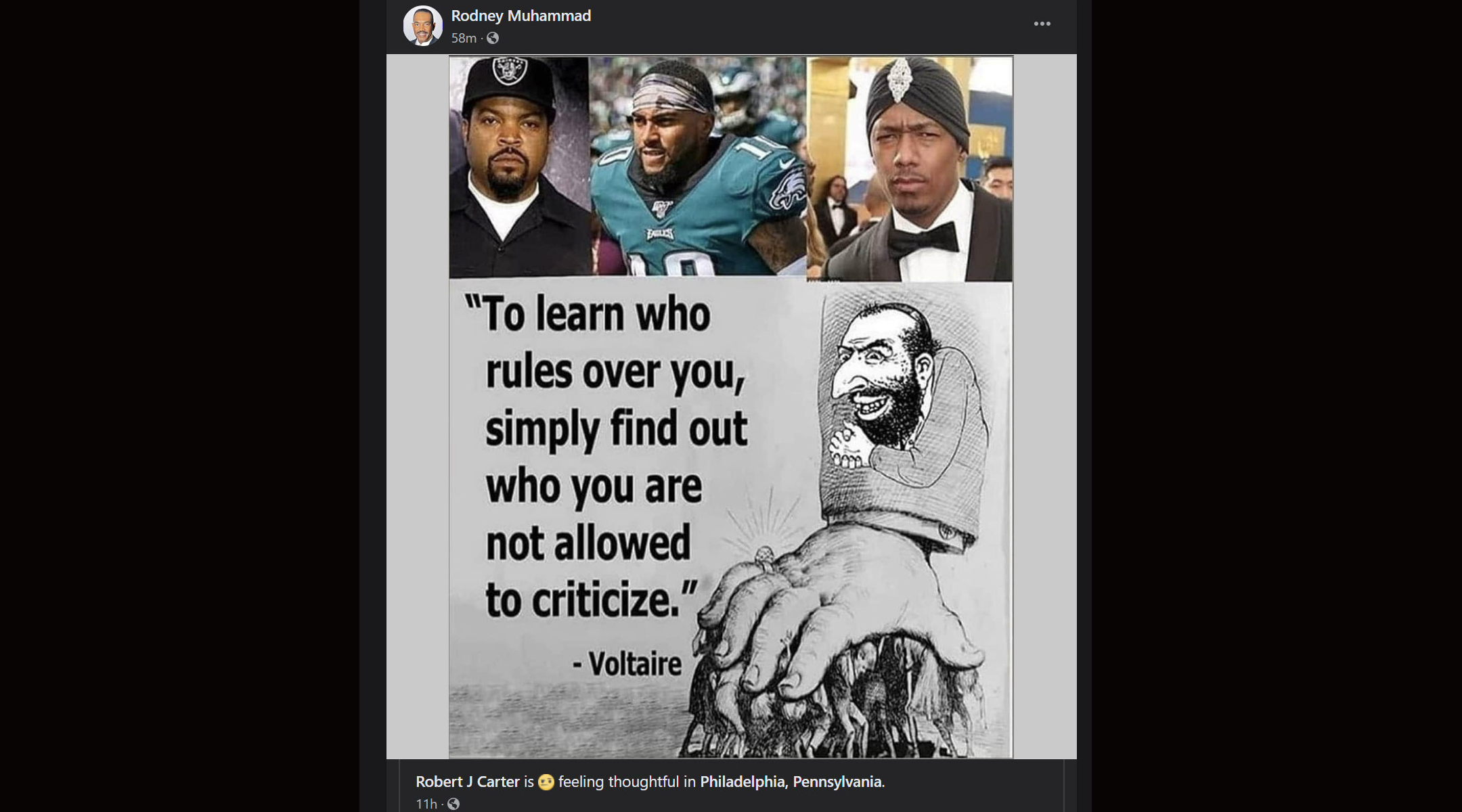 (JTA) — The Jewish Federation of Greater Philadelphia said it will not work with the local chapter of the NAACP over “an alarming amount of bigoted and anti-Jewish sentiments” on his social media channels and the mosque he leads.

Rodney Muhammad “still has yet to fully apologize for his most recent actions,” the federation said in a statement updated earlier this week.

The statement also said that while the federation would continue to work with the national office of the NAACP and other local chapters, “our obligation to oppose hate and discrimination will prevent us from working with the Philadelphia chapter while Mr. Muhammad is employed there.”

Last month, Muhammad posted a meme on his public Facebook page known as “the Happy Merchant,” an image that the Anti-Defamation League says is commonly used by white supremacists. The meme included photos of  Ice Cube, DeSean Jackson and Nick Cannon, Black celebrities who recently posted anti-Semitic comments on social media, and the quote “To learn who rules over you, simply find out who you are not allowed to criticize,” falsely attributed to French philosopher Voltaire but which originated with Kevin Strom, an American neo-Nazi. (Jackson and Cannon have apologized.)

The NAACP national leadership announced Wednesday that it will not cut ties with Muhammad, the Philadelphia Tribune reported. It cited an email statement from NAACP spokeswoman Austyn Ross saying that the national leadership was “saddened and deeply disappointed by the harm caused by Mr. Muhammad’s actions” and that Muhammad “now recognizes the offensive nature of the imagery and post.”

National NAACP President Derrick Johnson and Muhammad will meet with community and faith leaders in the coming weeks to “open a dialogue and continue the educational conversations,” the statement said.

In a widely reported statement released a week ago, Muhammad said “I do regret the insult, pain and offense it caused to all, particularly those of the Jewish community, by this unfortunate episode.”

Muhammad is up for reelection in November, according to the Tribune. He is the minister of a North Philadelphia mosque affiliated with the Nation of Islam network. The Nation of Islam’s leader, Louis Farrakhan, has made a number of anti-Semitic comments over the years.