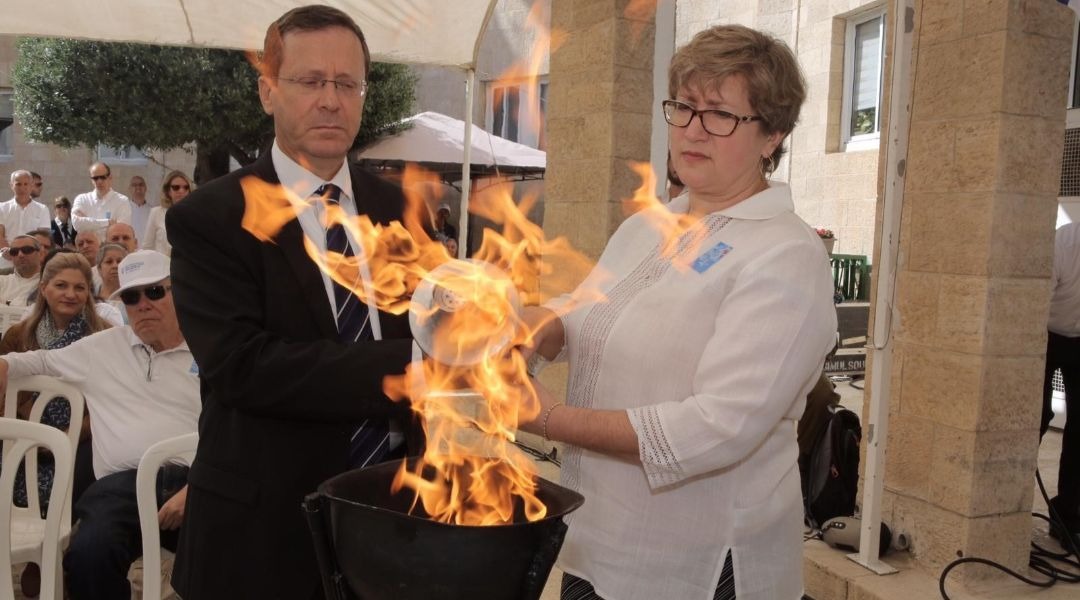 Marnie Fienberg, daughter-in-law of Joyce Fienberg, who was murdered in the attack on the Tree of Life synagogue building in Pittsburgh, and Jewish Agency head Isaac Herzog light a memorial torch at the Jewish Agency's Memorial Day ceremony in Jerusalem on May 8, 2019. (Noam Sharon)
Advertisement

JERUSALEM (JTA) — The victims of the synagogue shooting attacks in Pittsburgh and Poway were honored during the Jewish Agency for Israel’s memorial service for Yom Hazikaron, Israel’s Memorial Day for fallen soldiers and victims of terror attacks.

Marnie Fienberg, the daughter-in-law of Joyce Fienberg, who was murdered in the attack on the Tree of Life synagogue building in Pittsburgh, lit a memorial torch at Wednesday’s ceremony together with the chairman of the Jewish Agency, Isaac Herzog.

The president of the Jewish Federation of Greater Pittsburgh, Jeff Finkelstein, who will light a torch Wednesday night at the national ceremony to mark the start of Yom Haatzamaut, Israel’s Independence Day, also attended the ceremony.

“During this tragedy, during these awful times, something amazing has happened,” Fienberg said during the ceremony. “At our lowest point, we weren’t alone. There was support, love, and strength from all over the world, not just from our friends, from Jews everywhere … we felt that love, and love is what gets us through every single day.

“We are inspired by you Israelis — proud Israeli soldiers and citizens. You never back away from a fight and we aren’t going to either. We are stronger together, in Pittsburgh, in the United States, and here in Israel.”

Herzog said: “On this day, the Jews of the Diaspora unite in grief with all the residents of the State of Israel. And here, too, in Israel, we are united in grief with the Jewish families in the Diaspora, those who lost loved ones in terrorist acts and those whose children chose to wear their olive uniforms and gave their lives protecting Israel.”

More than 200 Jews have been murdered in anti-Semitic incidents and terrorist attacks across the Diaspora since 1948, according to the Jewish Agency.