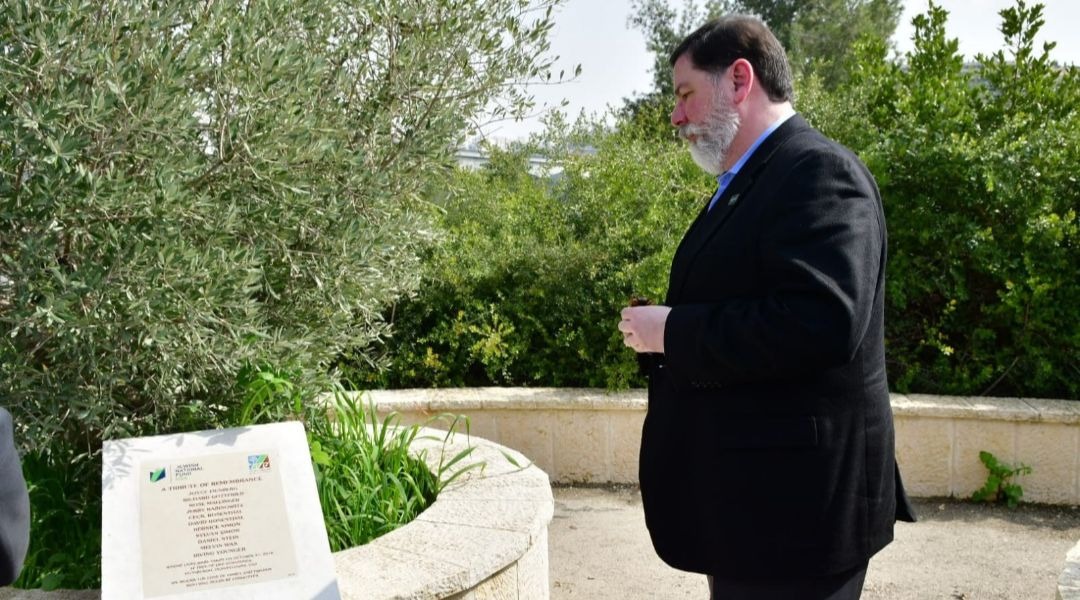 Pittsburgh Mayor Bill Peduto pays his respects at a memorial to the 11 victims of the Tree of Life synagogue shooting, located at at the Keren Kayemet L’Israel-Jewish National Fund 9/11 Living Memorial Plaza in Jerusalem, on Feb. 24, 2019. (Rafi Ben Hakun/KKL-JNF)
Advertisement

JERUSALEM (JTA) — The mayor of Pittsburgh visited the site of a memorial to the victims of the attack on the city’s Tree of Life synagogue building and planted an olive tree next to the plaque.

The memorial plaque was placed at the 9/11 Living Memorial Plaza in Jerusalem, established by JNF-USA and KKL-JNF, several weeks after the shooting. The olive tree planted on Sunday by Mayor Bill Peduto is meant to symbolize peace and continuity.

The plaque, which was established by JNF-USA  together with KKL-JNF,  lists the names of the 11 victims killed on Oct. 28, 2018, when a gunman entered the Tree of Life synagogue building in the Squirrel Hill neighborhood during Shabbat morning services and opened fire.

“I have a long history with the Tree of Life congregation, I knew some of the victims personally,” Peduto said in front of the memorial.

“Unlike 80 years ago, when Jews were murdered, when synagogues were destroyed and businesses were shattered, when the community called this time, the police didn’t turn their back, they ran in to help. Politicians didn’t look the other way or try to hide, they stood up and said never again. And business leaders and community leaders gathered as one and said ‘an attack against one is an attack against us all,’” the mayor said.JNF-USA

JNF-USA CEO Russel Robinson said at the event: “JNF-USA is the voice linking America and Israel. We know that when tragedy befalls either of our communities, we stand together to strengthen one-another. We are proud to represent the Pittsburgh community in Israel as an enduring reminder of this unshakeable bond.”

The mayor is visiting Israel as part of the 33rd International Mayor’s Conference held by AJWC and American Jewish Congress.