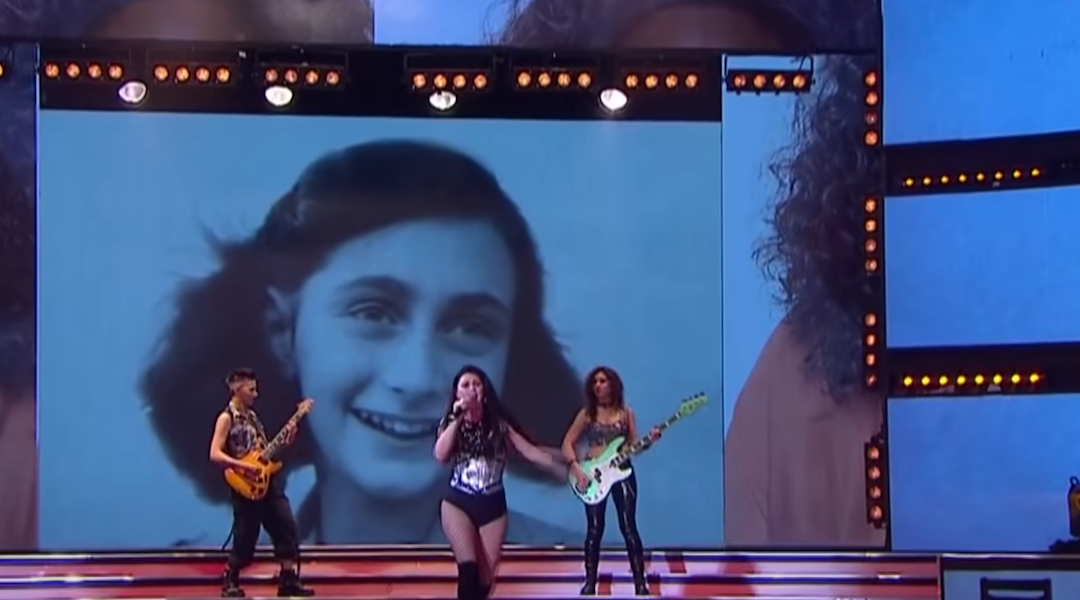 The face of Anne Frank projected in an episode of "Showmatch" in Argentina. (Screenshot from YouTube)
Advertisement

(JTA) — In a recent episode of “Showmatch,” one of Argentina’s most popular talent contest shows, a contestant sang about “women who don’t leave the house” — in front of a background image of Anne Frank.

The song, titled “I’m Not That Woman” and written by Spanish singer Paulina Rubio, refers to empowered women who do not follow traditional societal norms. The image of Anne Frank appeared on a giant monitor right as singer Sofia Jimenez sang the lyrics “I’m not the type of woman who doesn’t leave the house” on an episode that aired last Friday. The screen showed other prominent female figures throughout the song, including Oprah Winfrey and Mother Teresa.

Argentine Jewish institutions condemned the incident, and some of the show’s producers, as well as its host, visited the Anne Frank House in Buenos Aires, a museum that recreates the famed Jewish diarist’s attic hideout.

“To use Anne Frank as the background for a song by a woman who refuses to stay at home is to bring the banalization of the Holocaust to its extreme expression,” the Anne Frank House had written in a statement. “Anne Frank did not stay at home because she was a submissive woman, but had to hide to escape the persecution of the Nazi machinery.”

Showmatch, which debuted in 2005, has become one of the most watched and awarded TV shows in Argentine history. A group of producers led by host Marcelo Tinelli said the incident was an “unintentional mistake” and organized a visit to the Anne Frank House. Jimenez attended the visit as well.

Tinelli apologized on an episode of the show that aired Tuesday.

“I’m taking responsibility for that mistake. I’m far from trivializing the Holocaust. I personally visited the Anne Frank House in Amsterdam four times. I’m a father that sent one of his sons to the ORT [Jewish] school, I know very well the magnificent education that the Jewish community has in Argentina,” he said. “I’m expressing my sincere apologies.”

The Anne Frank House and Museum in Argentina opened in 2009 and hosts permanent exhibitions and runs educational programs. Since 2014, there has also been a statue of Anne Frank in Buenos Aires.