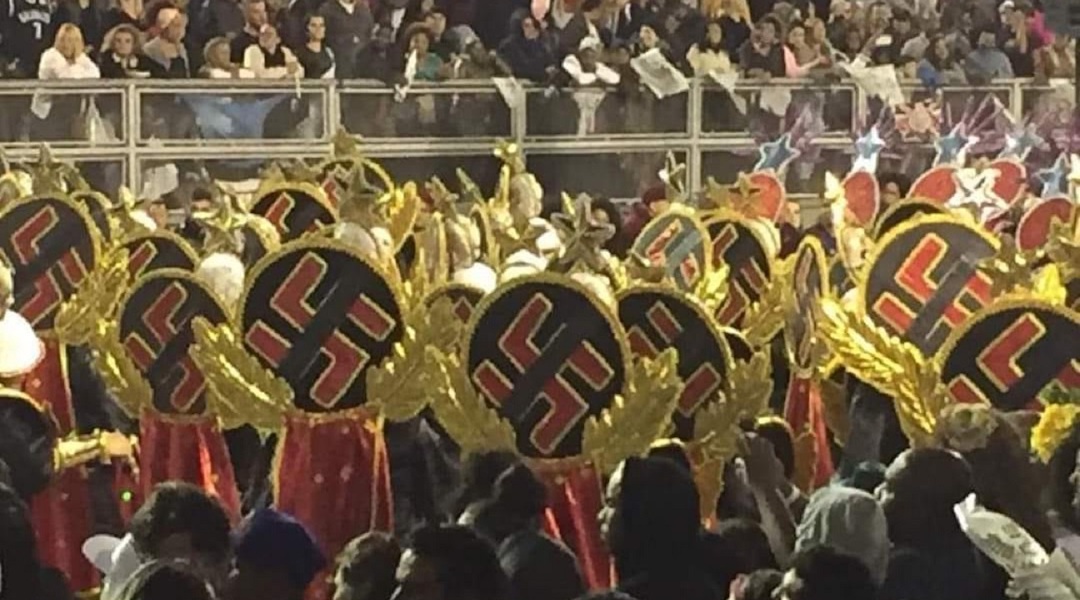 RIO DE JANEIRO (JTA) — A leading Brazilian Jewish official gave a thumbs up to a local Carnival performance that featured swastikas and mirrored a spectacle that raised eyebrows in the 1990s.

Some 100 dancers of the Vai-Vai samba school wore costumes featuring swastikas on their back at Sao Paulo’s Carnival, Brazil’s most popular festival and one of the world’s largest multi-day celebrations. Following a lunar calendar, this year it is being held from Feb. 21 to 26, 40 days before Easter Sunday.

The Nazi symbols had a black diagonal stripe on them, which were hard to see from afar.

“It was a critical evaluation, one of disapproval and condemnation of Nazism. There is no connotation involving the Jewish community or praising Nazism,” said Luiz Kignel, president of the Sao Paulo Jewish federation, who visited the group’s headquarters hours after the parade on Sunday.

Kignel distributed a voice message to several Jewish-themed WhatsApp groups to clarify the federation’s positioning. He highlighted that the Vai Vai’s message was about Nostradamus prophecies, including one that is supposedly a reference to Nazism.

“To us Jews it’s always shocking to see a swastika, but to non-Jewish eyes it’s a historical fact,” Kignel added.

The same Vai-Vai costume was slammed by Jewish groups in 1999.

Controversial Carnival floats involving Jews and the Holocaust are not rare in Brazilian Carnival parades, but in most cases, Jewish officials have been successful in removing the anti-Semitic figures or floats before the parades are seen on a live TV broadcast — which is watched by some 208 million Brazilians and reaches some 2 billion viewers worldwide.

There was another Jewish-themed component to this year’s Carnival: Stars of David and menorahs were featured on costumes of the Beija-Flor dancers, from one of Rio’s top samba schools known for its controversial themes and ostentatious costumes.

Helio Koifman, the Jewish leader of the Christian-Jewish Fraternity in Rio, joined another 19 people from different faiths in the Mangueira samba school’s parade to spread a message against religious intolerance.

“We Jews, who have been the most persecuted people throughout history, associate ourselves with the message of religious freedom for everyone of all religions,” he told the Jewish Telegraphic Agency.