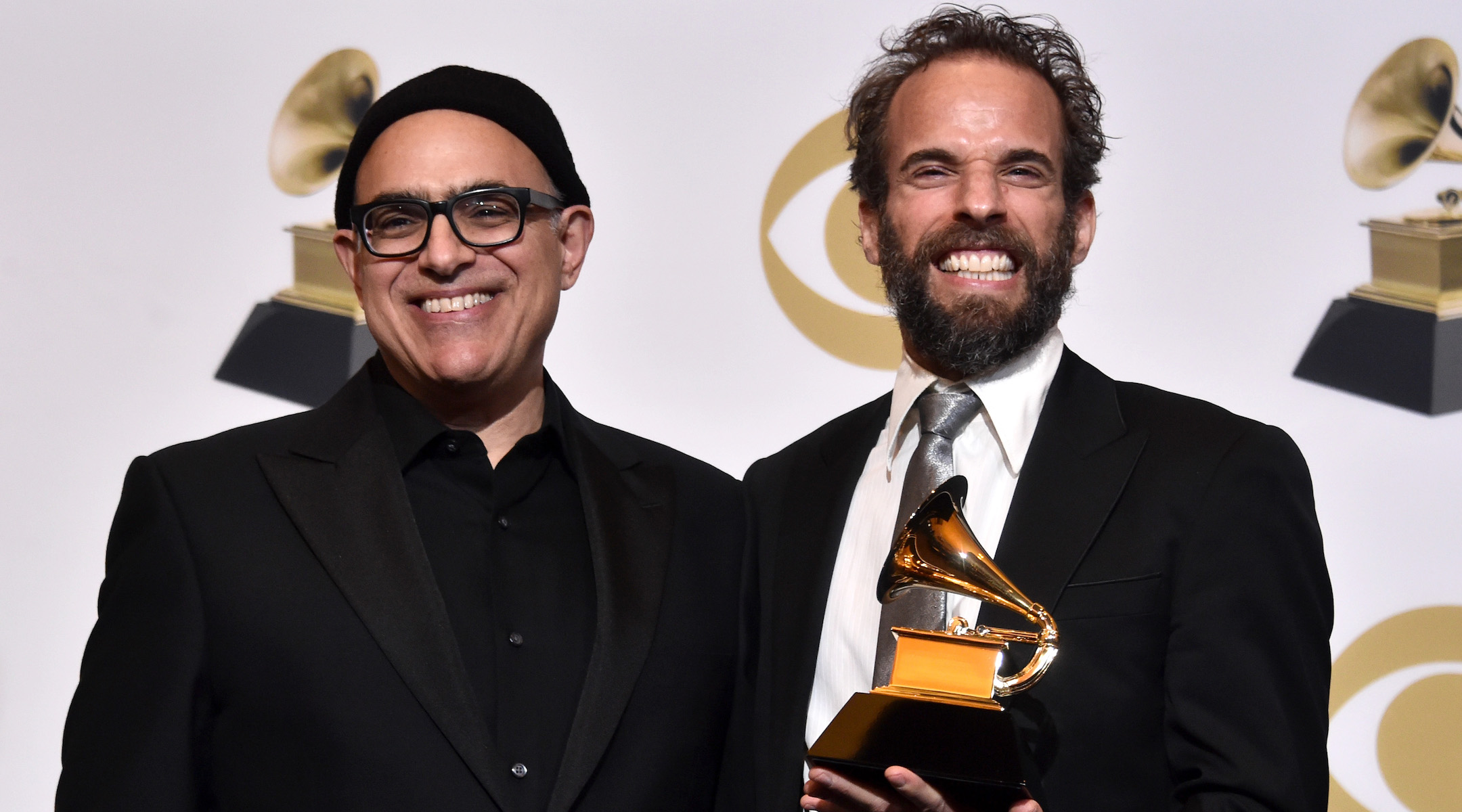 David Yazbek, left, and Dean Sharenow, winners of Best Musical Theater Album for "The Band's Visit," pose in the press room at the Grammy Awards at the Staples Center in Los Angeles, Feb. 10, 2019. (Alberto E. Rodriguez/Getty Images for The Recording Academy)
Advertisement

(JTA) — “The Band’s Visit,” the Tony Award-winning musical set in an Israeli village, added a Grammy Award to its list of accolades and Jewish rapper Drake also won a Grammy for best rap song.

The musical, which is based on a 2007 Israeli film, won for best musical theater album during the live award presentation on Sunday night. The show is leaving Broadway in April, but will go on national tour.

Drake won for “God’s Plan,” but it was his only award out of seven nominations. The Canadian singer and former day school student has won a total of four Grammys among 34 nominations.

In his acceptance speech, Drake offered a veiled criticism of the Grammys — and was cut off before finishing.

“We play in an opinion-based sport, not a factual-based sport,” he said. “You’ve already won if you have people who are singing your songs word for word, if you’re a hero in your hometown.”

Indie songstress St. Vincent won the Grammy for best rock song for “Masseduction.” It was co-written by Jack Antonoff, who is Lena Dunham’s ex-boyfriend and has also written songs with Taylor Swift and Lorde. Antonoff is a graduate of the Solomon Schechter Day School of Bergen County, New Jersey.

Lady Gaga’s “Shallow” from “A Star Is Born” won the award for best song written for visual media. The actress and singer shared the honor with co-writers Mark Ronson, Andrew Wyatt and Anthony Rossomando. Ronson, a leading producer of pop music, had a bar mitzvah.

Rashida Jones, the daughter of music legend Quincy Jones and Jewish actress Peggy Lipton, won the Grammy for best music film for her Netflix documentary on her father.

The “classical compendium” award went to the recording “Spiritualist,” featuring compositions by Kenneth Fuchs and vocals by the rising countertenor Aryeh Nussbaum Cohen. In accepting the award before the national broadcast, conductor JoAnn Falletta thanked Nussbaum Cohen, a New Yorker who grew up singing in HaZamir, the International Jewish High School Choir.