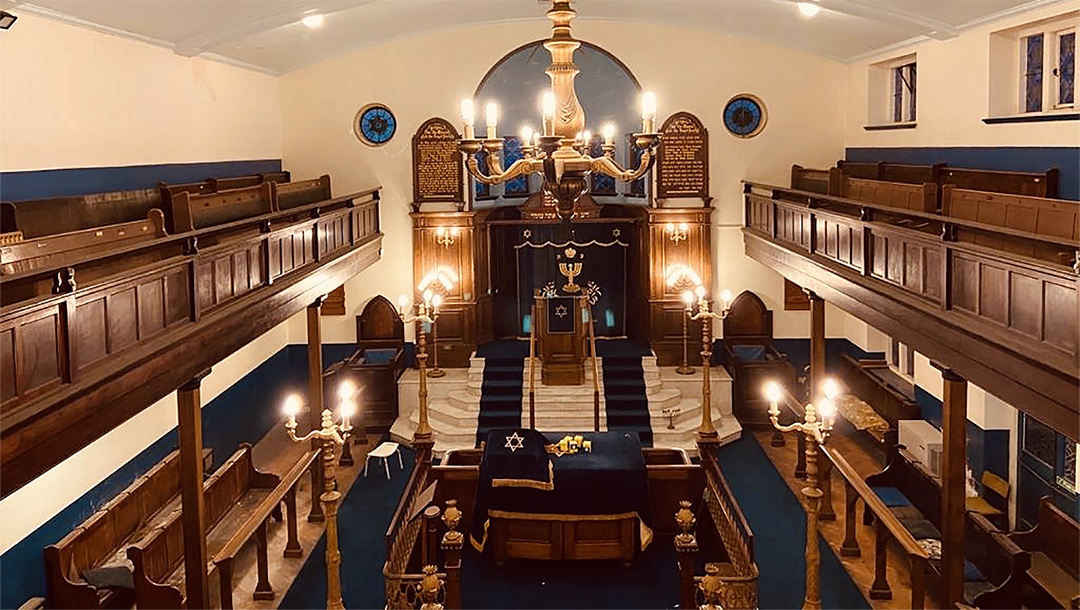 The interior of the Margate Synagogue in the United Kingdom. (Courtesy of SOS Margate)
Advertisement

(JTA) — A synagogue building whose tiny congregation can no longer afford its upkeep was saved with the help of some famous donors and will become a cultural center.

The Margate Synagogue building in Cliftonville, a coastal municipality situated some 75 miles east of the British capital, was bought on Dec. 24 thanks to a donations that totaled $410,000, the Jewish Chronicle reported late last month.

The building was put up for auction in November by its congregation of 11 people, who hope to relocate to a smaller space. It will now be turned into a center for “music, theatre, dance, exhibitions and food, as well as celebrating the rich history and diversity of the area,” with a goal of opening in 2022 after another round of fundraising.

Actor Ben Kingsley, television presenter Keith Brymer Jones and filmmaker Arnold Schwartzman (who is from the area and is known for “Genocide,” his Oscar-winning documentary on the Holocaust from 1981) were among those who made donations to save the building. But the largest chunk came from an anonymous donor.

Michael Mail, founder of the UK-based the Foundation for Jewish Heritage, told the Jewish Telegraphic Agency that the new owners intend to incorporate Jewish themes and activities in the new center. “I think the exact format is something that’s been worked out right now,” he said.

The local Jewish community has all but disappeared in recent years in the Cliftonville area as part of the demographic consolidation of Jewish life in the United Kingdom. Once vibrant Jewish communities in cities such as Leeds, Bristol, Birmingham and Liverpool have shrunk, as younger members moved to London and Manchester. A large haredi Orthodox community grew near Newcastle.

Synagogues and communal spaces in shrinking Jewish communities outside these major cities have become an unaffordable financial liability to the few Jews who have remained in places like Cliftonville. The number of people who identify themselves as Jewish in Britain has decreased by 25%, from about 345,000 in 1939 to 295,000 today, due to assimilation and emigration, according to a major demographic study of European Jewry published in 2020.