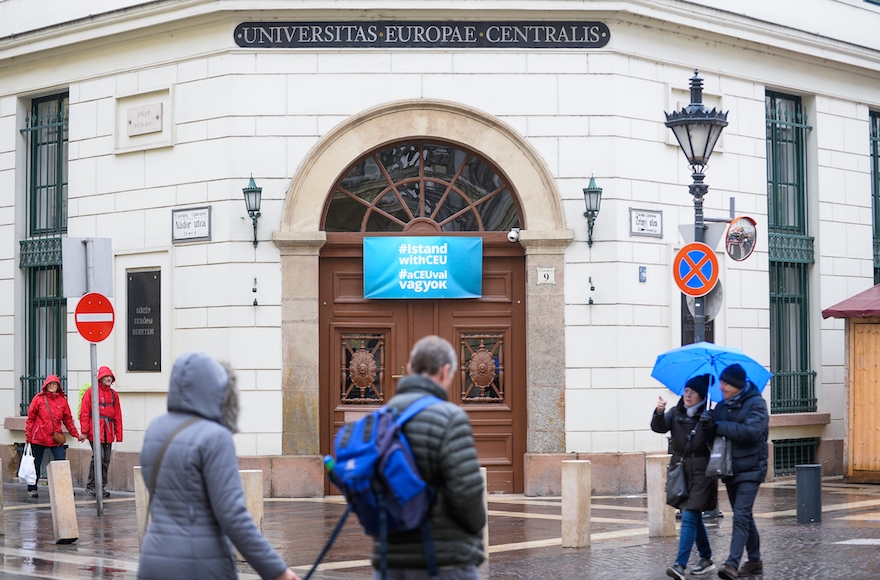 People seen walking by the Central European University in Budapest, Hungary, Nov. 24, 2018. The university said it will relocate its American-accredited programs to Vienna, starting in September 2019. (Omar Marques/SOPA Images/LightRocket via Getty Images)
Advertisement

WASHINGTON (JTA) — The U.S. ambassador to Hungary took the government’s side in its dispute with a university founded by George Soros, while the State Department said it was “disappointed” that the government and the university could not resolve differences.

Central European University said this week that it could not remain in Budapest under laws that the government of Viktor Orban passed last year that appeared to be aimed at pushing the university out of Hungary.

Orban routinely decries the Hungarian-born Soros, a Jewish billionaire philanthropist, as a sinister interloper in terms some have described as anti-Semitic.

In a Washington Post interview, David Cornstein, the U.S. ambassador to Hungary who counts Orban and President Donald Trump as friends, said the university did not do enough to accommodate Orban.

“It would pay to work with the government,” Cornstein said.

The State Department said in a statement that it was “disappointed” in the failure of both sides to reach an agreement and suggested that the change in Hungarian law precipitated the closure.

“Since the Hungarian government amended its law on higher education in April 2017, we have worked diligently with both parties to find a solution that would allow CEU to preserve these programs in Hungary,” it said Monday.

“The United States values the role that CEU and other American educational institutions play in building connections between the Hungarian and American people and strengthening the transatlantic bond. The departure of these U.S.-accredited programs from Hungary will be a loss for the CEU community, for the United States, and for Hungary.”

The law created conditions that the university said were insurmountable, including that it should establish a U.S. campus. The Washington Post reported that the Hungarian government did not take seriously Cornstein’s efforts to resolve the issue.