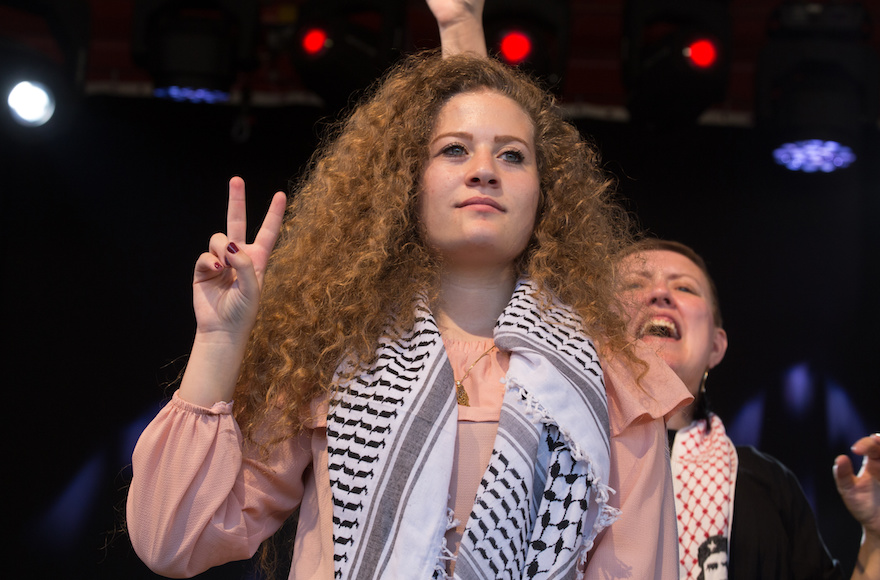 Ahed Tamimi at an event in Madrid on a European tour, Sept. 29, 2018. (Lito Lizana/SOPA Images/LightRocket via Getty Images)
Advertisement

JERUSALEM (JTA) — The younger brother and a cousin of Palestinian teen protester Ahed Tamimi, who gained worldwide attention after being jailed for assaulting Israeli soldiers, were arrested in their West Bank village.

Israeli soldiers arrested Mohammed Tamimi, 15, after raiding the family’s home in Nabi Saleh early Monday morning. The teen likely was arrested for throwing rocks at the soldiers, his father, Bassem, told The Associated Press, during the weekly demonstrations by village residents over the last decade protesting what they describe as confiscation of its lands and other issues.

Bassem Tamimi also said that his son broke his arm over the weekend while running from tear gas released by Israeli soldiers during the protests.

The teen’s cousin, Muayyid, also was arrested in a raid of his home early Monday morning. The Tamimis were among 21 Palestinians arrested in overnight raids for rioting and other disturbances, AP reported.

Mohammed Tamimi’s arrest was filmed by his mother, Nariman, and posted on Facebook. The recording shows Ahed Tamimi, 18, hugging her brother goodbye and shouting at the soldiers removing him from the home.

Ahed Tamimi was released from prison in July after serving eight months for assault of soldiers. A video of Ahed slapping an Israeli soldier went viral. Her mother had been jailed for incitement.

Another brother, Waed, 22, was arrested in May for throwing rocks at Israeli soldiers and later sentenced to 14 months in prison.