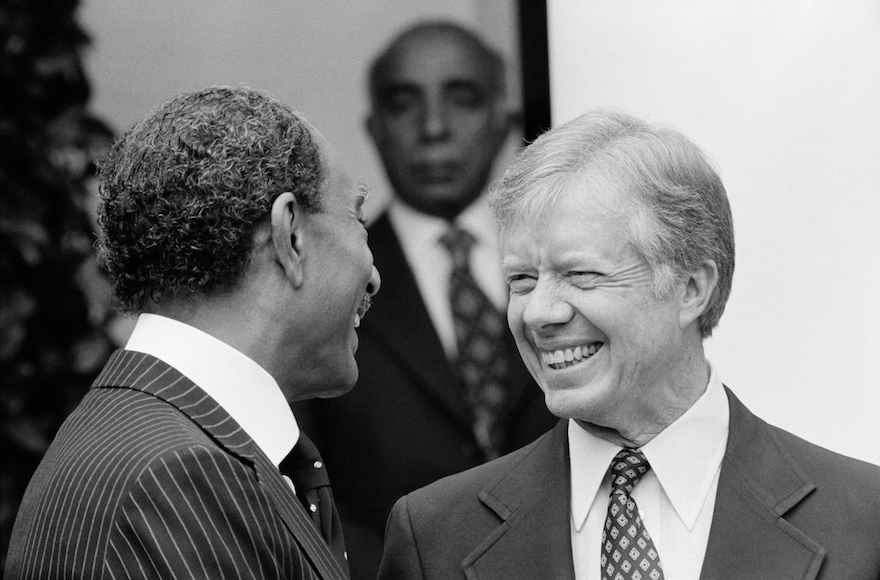 Jimmy Carter and Fred Harris, two of the candidates for the Democratic Party’s Presidential nomination, while expressing support for Israel differed on how the United States should approach the Arab-Israeli conflict. They expressed their views on NBC’s “Meet the Press” program last Sunday. Two other candidates on the program, Sen. Birch Bayh of Indiana and Pennsylvania Governor Milton Shapp were not questioned about the Middle East.

Carter, a former governor of Georgia, said he thought the United States should continue with its step-by-step approach to negotiations in the hope that “Jordan, Saudi Arabia, and at least Lebanon might come forward to a negotiation with Israel that would be fruitful.”

But Harris, a former U.S. Senator from Oklahoma, said that an “overall” Geneva conference is now required. “We have gone about as far as we can in the step-by-step approach,” Harris said. “I think we have pushed Israel awfully far up to now with very little in return, and it is going to make the next steps very tough.”

Carter said that “an integral part” to the “ultimate solution” in the Middle East is “recognition of the Palestinians as an entity with the right to have their own nation, to choose their own government, to exist in a territory,” either on the West or East Bank of the Jordan River. But he said the U.S. should not recognize the Palestine Liberation Organization “until they recognize the right of Israel to exist in peace in their present location.”

While saying that Israel might have to withdraw from some of the territory occupied since 1967, Carter conceded that if he was Israel’s Premier, he would not withdraw from the Golan Heights nor the Jewish and Christian holy places in Jerusalem.

Harris said that the U.S. cannot impose a peace on the Middle East and challenged the incentives President Ford and Secretary of State Henry A. Kissinger are using to get agreements. He said the U.S. should become financially involved in regional development in the Mideast rather than providing arms and nuclear plants to the Arabs. He said it made no sense to supply planes and tanks to Israel and then talk about providing the Arabs with sophisticated arms to knock them out. He said he was not suggesting that the U.S. should stop supplying arms to Israel but he said they should stop providing them to the Arabs.