Report: Anti-Semitic activity up in Canada 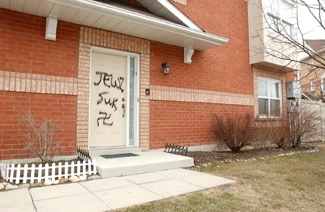 A home vandalized on March 16 during a spate of 13 anti-Semitic incidents in the Greater Toronto area. (Courtesy B´nai Brith Canada)
Advertisement

TORONTO, March 16 (JTA) — Just days after B’nai Brith Canada released a report documenting a steep rise in anti-Semitic incidents in Canada, a rash of anti-Semitic vandalism took place in the Toronto area. Thirteen homes and cars were painted with swastikas and other racist messages Sunday night in a heavily Jewish neighborhood in the Toronto suburb of Thornhill, leaving residents upset and police scrambling to find witnesses to what they are classifying as a hate crime. The report, released March 11 by B’nai Brith Canada, showed that anti-Semitic activity across Canada is at the highest level in more than two decades. The group’s Audit of Anti-Semitic Incidents for 2003 documented 584 such incidents in 2003, twice as many as in 2001. While 389 of the incidents were categorized as harassment, which rarely results in criminal investigations or charges, 180 incidents were classified as vandalism and 15 as violent, a category used only once since the audit began in 1983. The audit “gives you cause for concern, because obviously something is wrong with the way Canadians are being educated about tolerance and multiculturalism and acceptance of differences,” said Nir Katzour, an Israeli-born lawyer practicing in Toronto. “It ultimately means that we require more defined and tougher laws out there to counter hate-related incidents or crimes, and have more effective enforcement of these laws.” Perhaps most alarming to Jewish officials is the steep rise of anti-Jewish activities observed on college campuses. “There’s a much higher number of students reporting problems than we’ve ever had before,” said B’nai Brith’s president, Rochelle Wilner. A spike in anti-Semitic activity occurred during the first four months of 2003, a period corresponding to the build-up, outbreak and aftermath of the Iraq War, which saw heightened levels of dissent and confrontation on campuses and elsewhere in Canada. B’nai Brith also documented an increasing number of political commentators who, they say, crossed the line from legitimate criticism of Israel into the ugly realm of anti-Jewish hate speech. The organization operates an anti-hate hotline seven days a week, 24 hours a day, and also receives reports of hate incidents through its network of regional offices across the country. Each reported incident is thoroughly documented and verified independently, if possible. More than half of the recorded incidents occurred in Toronto, which is home to about half of the nation’s roughly 360,000 Jews. Some 102 episodes were reported in the Montreal area, while 45 were centered in Ottawa and the surrounding area. The rest were spread out from British Columbia, where an Arab paper published a virulently anti-Semitic article, to Nova Scotia, where the 103-year-old synagogue in Glace Bay was vandalized. “This is the first time in the history of the synagogue that it has ever been targeted,” the audit noted. Twenty-three of the harassing incidents last year involved synagogues, 22 involved other communal buildings, 46 involved Jewish students on campus and 34 involved schoolchildren. In the vandalism category, mezuzahs were destroyed, Jewish tombstones were overturned, swastikas were painted on or near Jewish property, bricks were thrown through windows and Jewish sites were set ablaze, including a youth library and nursery school in Ottawa. Among the 15 reported acts of physical violence, a man was attacked with a hammer after leaving a Toronto synagogue and an elderly Jewish woman was assaulted in a Montreal park by two female teenagers appearing to be of Arab origin. The Canadian public has apparently undergone a “process of densensitization” to such acts: the audit noted that behavior “once seen as offensive and unacceptable is now being viewed as less serious and even routine.” Orthodox Jews, who often bear the brunt of harassment, were seen as the most likely to shrug it off, B’nai Brith observed. The audit noted a “convergence between extremist left wing and right wingers, historical opponents who have found common ground in their antagonism toward Israel and Jews.” It also suggested a link between the sharp rise of anti-Semitic activity and the increased numbers of “newcomers from Arab/Muslim lands” who “have been socialized in ways that promote hatred toward Jews.” “The greatest threat to the security of the Jewish community is no longer the neo-Nazi groups as in the past, but rather the elements linked to international terrorist organizations,” Wilner said. Now that the 71-page audit has been published, B’nai Brith staff members say they have no time to relax. They say they fear a spike in anti-Semitic activity may result from Mel Gibson’s controversial film, “The Passion of the Christ.”