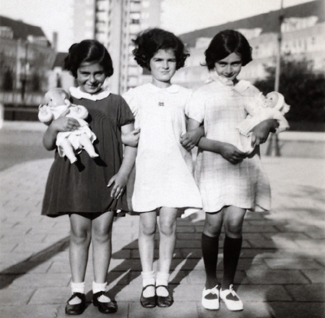 This photo of Anne Frank, at right, in Merwedeplein, Amsterdam, in 1936 is part of a new exhibit of images taken by Otto Frank, called ´Anne Frank: A Private Photo Album,´ brought to the United States by The Anne Frank Center USA. ("© AFF Basel/AFS Amsterdam; courtesy of The Anne Frank House, Amsterdam")
Advertisement

BERLIN, June 15 (JTA) — Like tens of millions of others, Siegfried Kuhn read Anne Frank’s diary — but he didn’t stop there. Kuhn, who works for the German Postal Service, has visited Amsterdam and Bergen-Belsen, tracing Anne’s fate. “I try to convince others that they should be interested, too, so that nothing like that can ever happen again,” he said. On Saturday — which would have been Anne’s 75th birthday — Kuhn, 33, came to Berlin from the German town of Sangerhausen to see an exhibit of 40 family photos by Otto Frank, Anne’s father. On display until Sept. 12 at the Anne Frank Center, which is tucked inside a courtyard in the former East Berlin the photos shed new light on the Franks’ daily life before World War II. Similar exhibits are being mounted by the Anne Frank House in Amsterdam at the Foam Gallery, and at the Kraushaar Gallery in New York. The New York exhibit, which was arranged by The Anne Frank Center USA in Manhattan, will be in place through the end of July, after which it will travel to Houston. Hanging on the walls are pictures of Anne and her sister, Margot, as babies and toddlers. There are beach scenes and school photos, family groups and street scenes. All indicate that Otto and Edith Frank tried to preserve a sense of normalcy until they went into hiding in the attic of 263 Prinsengracht St. in Amsterdam in July 1942. Ultimately the hiding place was betrayed, and the family was arrested and deported in August 1944. Anne and Margot Frank died of typhus in the Bergen-Belsen concentration camp in March 1945, shortly before it was liberated. Their mother also died, but Otto Frank survived the war. One of the most striking photos is one of Anne sitting at a desk in Amsterdam, pencil in hand. Taken in April 1941, it shows a girl on the verge of womanhood, with the hint of a smile. Anne “was a girl who loved life,” said Buddy Elias, 79, Anne’s cousin, who visited the center over the weekend. Like Anne, Elias was born in Frankfurt. While the Franks went to Holland, the Eliases moved in 1931 to Switzerland. “We played together, as long as she was able to come to Switzerland,” said Elias, an actor who since 1996 has been president of the Anne Frank Foundation of Basel. Anne’s diary amazed him, “and her essays and fairytales were amazing. As Otto Frank always says, there was an Anne who belonged to me and an Anne that belonged to the world,” Elias said. “She had the same problems as any other teenager: parents, growing up, sexuality, and so on,” Elias said. It’s still hard for him to believe, he added, that a child had to hide because a government declared her to be less than human. Hannah Pick, then Hannah Goslar, came to the opening from Jerusalem to see photos of the girl whose voice she last heard over a barbed wire fence in Bergen-Belsen. “We went to the same kindergarten” in 1934, said Pick, 75, whose family also fled Germany for Holland. The girls became fast friends, but in 1942 Pick came back to school after vacation “and I wanted to play and she was not there.” The exhibit, “Anne Frank and Her Family — Photographs by Otto Frank,” is one of several projects honoring the memory of the girl whose diary has been translated into 60 languages since its initial 1947 publication in Dutch. This year, German schoolchildren will compose essays for a competition on how to combat prejudice; winning essays will become “A Book for Anne Frank.” The diary also will be translated into Arabic for the first time. Thomas Heppener, 38, head of the Anne Frank Center’s board, said the center decided to make it possible for Arabic-speaking children in Europe to read the diary “because we believe the book is a symbol of understanding and of human rights and understanding, a symbol against persecution and discrimination,” he said. In the center, realistic facsimiles of Frank family photo albums lie open in glass cases, looking as they might have when Anne filched a snapshot to slip into the pages of her diary. Otto Frank, who died in 1980, was an avid photographer who took both candid and posed shots of his family. He reportedly never picked up his camera after the war. One of the few photos of Otto Frank in the exhibit was taken by the American photographer Arnold Newman in the Prinsengracht attic, on the day it opened to the public in 1960. In the photo, Otto Frank leans against one of the support beams in the attic, appearing lost in thought. Shortly after the shutter snapped, the church bells that Anne described in her diary began to ring. Both Otto Frank and the photographer cried. The center also contains a permanent exhibit about the fate of the family, including a video interview with Otto Frank. Pick, who survived Bergen-Belsen with her sister Rachel, remembers her last contacts with Anne. Anne and Margot had been sent to the camp from Auschwitz, while Pick and her sister had come via the Westerbork transit camp in Holland. In Bergen-Belsen, the two groups were separated by a barbed wire fence filled with straw, Pick recalled. “I heard by chance that she was there behind the fence,” she said. A woman who had hidden with the Franks in Amsterdam brought Anne to the other side of the fence. The girls communicated three times, Pick said, “but I never saw her.” Once Anne “asked if I could throw over something to eat,” she said. Pick threw Anne a Red Cross package with bread and dried plums. “And she cried. Because another person caught it and ran away and gave her nothing,” Pick said. Pick threw some more food over, and “she got it,” she said.