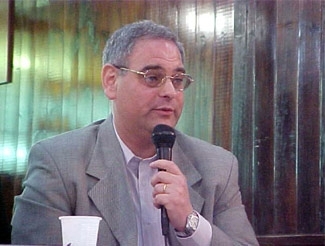 BUENOS AIRES, May 23 (JTA) — Peru’s Jewish community is closely watching the country’s presidential runoff election, especially a controversial candidate, Ollanta Humala. Jewish businessmen and intellectuals are especially concerned that Peru, under a nationalist like Humala, could turn into a hotbed of anti-American and anti-European attitudes similar to Hugo Chavez’s Venezuela and Evo Morales’ Bolivia, said Guillermo Bronstein, leading rabbi of Lima’s largest synagogue, Asociacion Judia 1870. Humala, a retired army colonel who was dismissed after leading a failed coup in 2000, won the first round of voting April 9, but his 31 percent fell short of the 50 percent needed for outright victory. After a drawn-out recount, the former president Alan Garcia, a center-left candidate, will face Humala in the June 4 runoff. Garcia edged a center-right candidate, Lourdes Flores, by 24.4 percent to 23.6 percent. Bronstein is quick to note that his statements on the election are merely his own perspective. That hints at the divisions in Peru’s Jewish community, which is small — some 3,000 in a country of 24 million — but economically and politically powerful. “Nobody has the right to speak or give opinions as if they were representative of the Peruvian Jewish community,” Bronstein said. Bronstein says support for Humala from an important Jewish community leader — “not in our congregation, mind you” — has made a difficult situation even worse. He was referring to Luis Mekler, president of the Peruvian Jewish Association. Mekler used to be one of Humala’s major critics for alleged anti-Semitism and xenophobia, but has become one of his most ardent supporters as a candidate for Congress on Humala’s slate. In December 2005, Mekler called Humala “a wolf dressed in sheep’s clothing” and claimed he was hiding his anti-Semitism as part of his election strategy. Mekler said Humala and his brother, who were trying to organize an indigenous nationalist movement, used anti-Semitic language and showed a “deep-rooted hatred toward Jews” at the start of their campaign. Later that month, however, Mekler said Humala had “convinced me that he was not anti-Semitic,” and he joined his slate for April elections. Attempts to reach Mekler for comment were unsuccessful. “There is fear in our community over what will happen to Peruvian-Israeli relations if Humala is elected, and we are a Jewish community with strong ties to Israel,” Bronstein said. Still, most of the Jewish community has not publicly stated its preferences, “although one could certainly say that Garcia has more friends within the Jewish community,” Bronstein said. Garcia also carries some baggage. During his 1985-1990 presidency, Peru suffered hyperinflation and violence from the Shining Path, a Marxist guerrilla group. His administration also was hounded by charges of corruption. The formerly radical Garcia claims to have developed a more moderate stance, market-friendly and not hostile to Washington. Some observers say he has been helped by verbal sparring in the media with Chavez, as well as the latter’s open support for Humala. Polls give Garcia a 10- to 12-point lead, though Bronstein believes the polls could be deceptive. “Those numbers really don’t mean much historically in Peru when you realize that 35 or 40 percent of the electorate doesn’t decide who they will vote for until the moment they cast their ballot,” Bronstein said. Chavez has irked many Peruvians by publicly supporting Humala and ridiculing Garcia. “What Chavez has done is galvanize support for Garcia by sticking his nose in the election,” said Bronstein, who believes Garcia’s expected advantage is due in great part to popular reaction against Chavez’s comments. “Garcia has completely distanced himself from Chavez’s policies.”