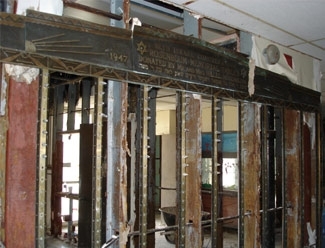 NEW YORK, July 10 (JTA) — Only in New Orleans would people talk in the same breath about Mardi Gras festivities and rebuilding from the ruins of Hurricane Katrina. At least, that’s how it seemed to Carol Wise. A board member of the Jewish Women’s Archive, Wise returned to her native New Orleans in mid-November after riding out the epic storm in Houston. “From a storm and flood of biblical proportions we, like Noah, have the ability to land on dry land and re-establish our community two-by-two and, like Noah, our rainbow may be the love and affection of the community, one for the other,” she wrote in a November e-mail. That excerpt will join many others in Katrina’s Jewish Voices, an interactive digital archive that the Jewish Women’s Archive hopes will galvanize the public when it’s released later this month. For the first part of the project, the archive teamed up with George Mason University’s Center for History and New Media. That portion of the project involves sifting through media ranging from news clippings to personal e-mails. To preserve this history, the Web site is dependent upon people saving these contemporary artifacts and submitting them to the archive, said Jayne Guberman, director of oral history at the Jewish Women’s Archive and of the new Katrina project. In another excerpt, volunteer Richard Moche discovered a new purpose for the crowbar while gutting the rotted entrails of a Louisiana home: A tool to pry things apart became a tool for bringing people together. “This kind of prayer is very effective in groups of two. You have a companion to assist you when you hit spiritual roadblocks like a recalcitrant molding or a dead animal hidden behind a panel,” Moche wrote about his experiences of a trip he and his son took last winter with the Boston Jewish Community Relations Council to repair damaged homes. “Soon we were home, trying to convey to our families the spiritual journey we had just taken,” he wrote, “how we had gone to Louisiana to give but had instead received, how we had met people poor in possessions but rich in resolve.” In the second part of the project, beginning next week, the Jewish Women’s Archive and the Goldring/Woldenberg Institute of Southern Jewish Life will take 100 oral testimonies of Jews from communities affected by Katrina. “Katrina’s Jewish Voices will record the small and heroic acts of kindness performed not only by Jews for other Jews, but also by Jews for their fellow Americans who were displaced and in need,” Rosalind Hinton, a professor of religious studies at DePaul University and the project’s oral historian, wrote in an e-mail. Noting that the Jewish experience of the tragedy scarcely figured in mass media coverage, and wanting to do more than contribute financially, the archive hatched the project in the weeks after the disaster, Guberman said, and after absorbing Wise’s experience. Katrina’s Jewish Voices is the first project of its kind to focus on the Jewish experience in an effort to weave it into the larger picture, the archive said in a press release. “It’s more than just, ‘Jews were there too,’ ” explained Stuart Rockoff, head of the Goldring/Woldenberg Institute’s history department. One hallmark of the Southern Jewish experience was that Jews lived comfortably in small towns and often spearheaded philanthropic causes there, Rockoff said. But Hurricane Katrina reversed that equation last August. “Middle-class Jews found themselves on the receiving end of charity,” he noted. Wise, who returned to New Orleans in mid-November after a crammed stay at a FEMA-subsidized hotel with her daughter and two granddaughters, thanked Houston’s Jewish community for providing driving services and Shabbat dinners. She was especially grateful to one woman who offered her home for Labor Day weekend. When she returned to New Orleans, Wise said, she found her home almost “embarrassing” because it had suffered only minor damage compared to structures that had been eviscerated. “The Ninth Ward was devastated and horrible. The 17th Street area was devastated as well,” Wise said, referring, in the latter remark, to the heavily Jewish area where she lives. “But instead of being at poverty level, these were people like you and me.” None of the Katrina-related Web sites includes the Jewish narrative, according to Guberman. That narrative includes not only the $30 million donated by Jewish groups to both Jews and non-Jews for relief purposes, but also the trauma of displacement and dispossession of the Jewish community, whose roots in New Orleans date from the mid-18th century. One reason the Jewish narrative may be absent from the overall Katrina story is survivor’s guilt, Guberman said. “We know the almost total devastation that other populations suffered,” Guberman said, but “it doesn’t diminish the Jewish community’s suffering: If you lost your home, you lost your home.” She continued, “We want to have an inclusive story as possible — the poorest, the wealthiest, everyone in between.”