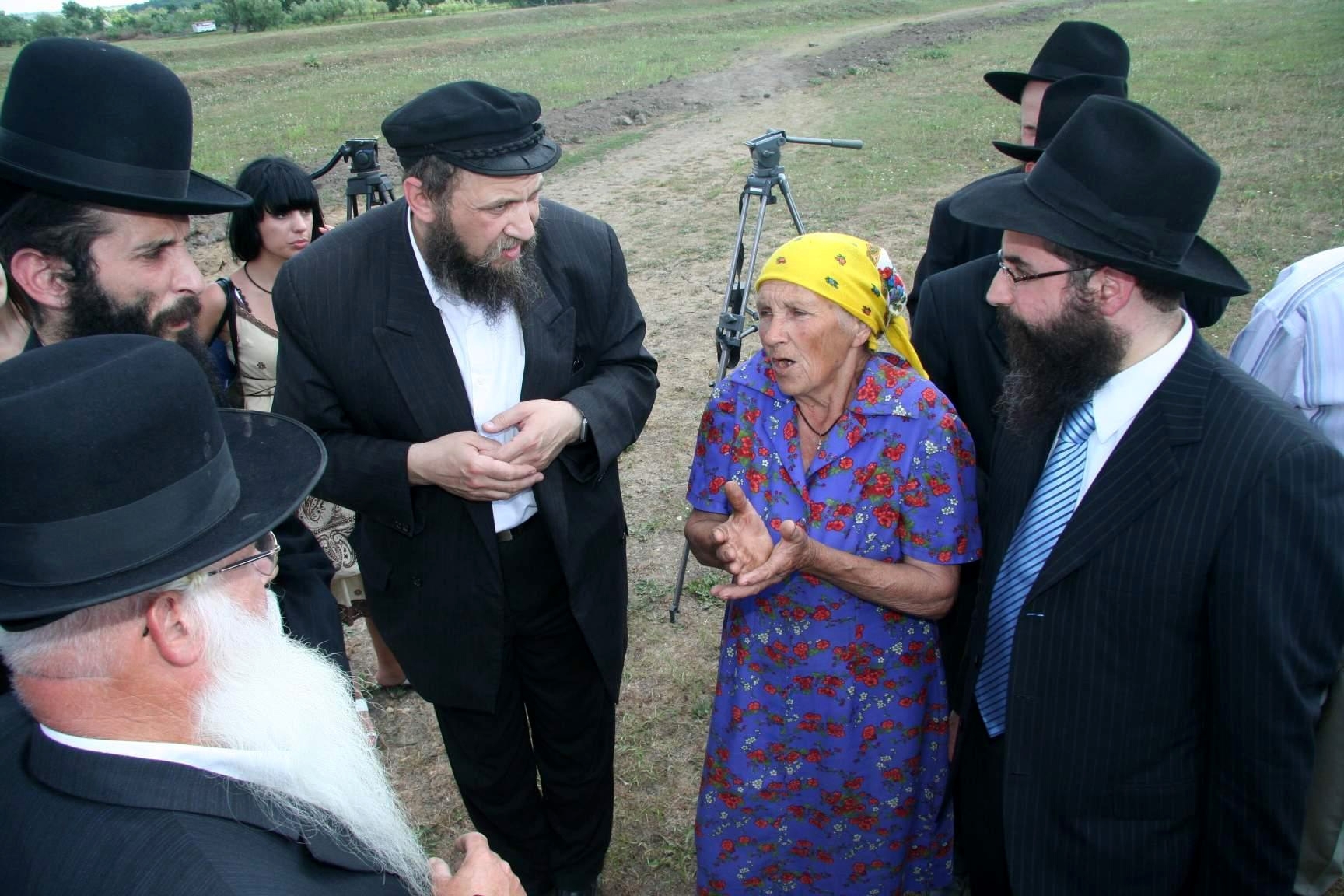 A local resident tells a group of visiting rabbis in June 2007 about the Nazi-era massacre of Jews in Gvozdavka, Ukraine. (Courtesy of Federation of Jewish Communities of Ukraine)
Advertisement

KIEV (JTA) – With the discovery of a mass grave believed to contain the remains of thousands of Jews killed by the Nazis, angry Ukrainian Jewish leaders are demanding their country come clean on the Holocaust.
“During the Soviet era, Ukrainian authorities did not tell the truth about the real number of Holocaust victims” in Ukraine, said Mikhail Frenkel, head of the Association of Jewish Media in Ukraine. “Today some local authorities are still trying to conceal the numbers.” Ukrainian officials say that isn’t the case.”The situation is a rudiment of Soviet mentality and stereotypes,” Vasily Gazhaman of the Ukrainian State Committee on Religions and Nationalities told JTA.Some Jewish leaders are insisting that the grisly discovery in the southern village of Gvozdavka be used to teach
greater sensitivity regarding the massacre of Jews during the
Holocaust and tolerance to younger Ukrainians.About 1.5 million Jews are believed to have been killed in Ukraine during World War II.Meanwhile, a grave believed to contain the remains of dozens of Jews killed by the
Nazis was found in western Ukraine. Along with the remains of at least 60
people, workers digging on the site
of a future office complex near Netishin,
a town in the Khmelnitzky Region, also found what resembled fragments of Torah scrolls.

“Torah
fragments suggest that probably this was a massacre of Jews killed in
1942,” said Valeriy Malkin, deputy head of the Khmelnitzky regional
state administration.

Local authorities assigned a special commission to investigate the case.The Gvozdavka grave was found last month when workers were preparing to lay gas pipelines in the village about 100 miles from Odessa, said Roman Shvartzman, head of the Odessa Regional Association of Jewish Prisoners of Ghettos and Concentration Camps.Residents of Gvozdavka, in the Lyubashivsky District, confirmed that their village contained a ghetto during World War II, and that Romanian and German Nazis brought Jews there from Moldova, as well as from the areas of Odessa and Zhitomir. Shvartzman said the Romanians and local collaborators established a concentration camp near the village that was active between November 1941 and March 1942. About 5,000 of the camp’s predominantly Jewish prisoners were murdered. More died from starvation and disease.But according to Shvartzman, despite the scale of the operation, local residents “forgot about the tragedy,” and Jews after the war were unable to establish where the victims were buried.Iliya Levitas, a Holocaust expert and a veteran leader of the Jewish community of Ukraine, said he was not surprised by the recent find. He also blamed the local population for not disclosing the news after the war.”The locals knew about the tragedy and the massacre but did nothing, and local authorities were also silent,” Levitas said. “Only due to the pipeline construction did we learn about the site.”Jewish leaders and some non-Jewish Ukrainian public figures successfully appealed to the authorities to halt the construction and investigate the wartime tragedy.”When the workers found the remains, I gave an order to stop the construction and set up a commission right away,” Anatoly Ostrovsky, a Lyubashivsky District official, told JTA. “Thanks to me this case received publicity.”Rabbi Avraham Wolf of Odessa, a Chabad Lubavitch rabbi, told JTA that the Jewish community has asked local authorities for ownership rights to the land that contains the remains, so the victims can be buried according to Jewish tradition and a monument erected in their memory.Jewish
leaders and Holocaust researchers believe there are 350 to 700 mass
graves of Holocaust victims in Ukraine that remain undiscovered.Schvartzman estimates that about 240,000 Jews were murdered in the region of Odessa, but only the
names of 93 Jews killed at the Gvozdavka site are known.But some Jewish leaders say that burying the remains will not solve the
bigger problem of proper Holocaust remembrance in Ukraine.This tragedy, Wolf said, “should be a lesson for future generations on how not to behave toward other ethnic and religious groups.”According to the Ukrainian Ministry of Education, the Holocaust is taught in schools as an elective subject. The ministry says the schools also feature lectures, exhibits and media presentations on the subject. Jewish leaders say Ukrainian authorities should do more to combat the growing xenophobia and anti-Semitism in the country. They are concerned that Ukraine, in bidding to build a new national identity, is making heroes of those who were responsible for killing Jews while fighting for Ukrainian independence during and after World War II.President Viktor Yuschenko recently signed a decree calling for a law recognizing the Ukrainian soldiers who fought alongside the Nazis in the Great Patriotic War. He also welcomed the upcoming commemoration of the 100th birthday of Gen. Roman Shukhevich, commander-in-chief of the Ukrainian Resurgent Army, or UPA, that was allied with the Germans.