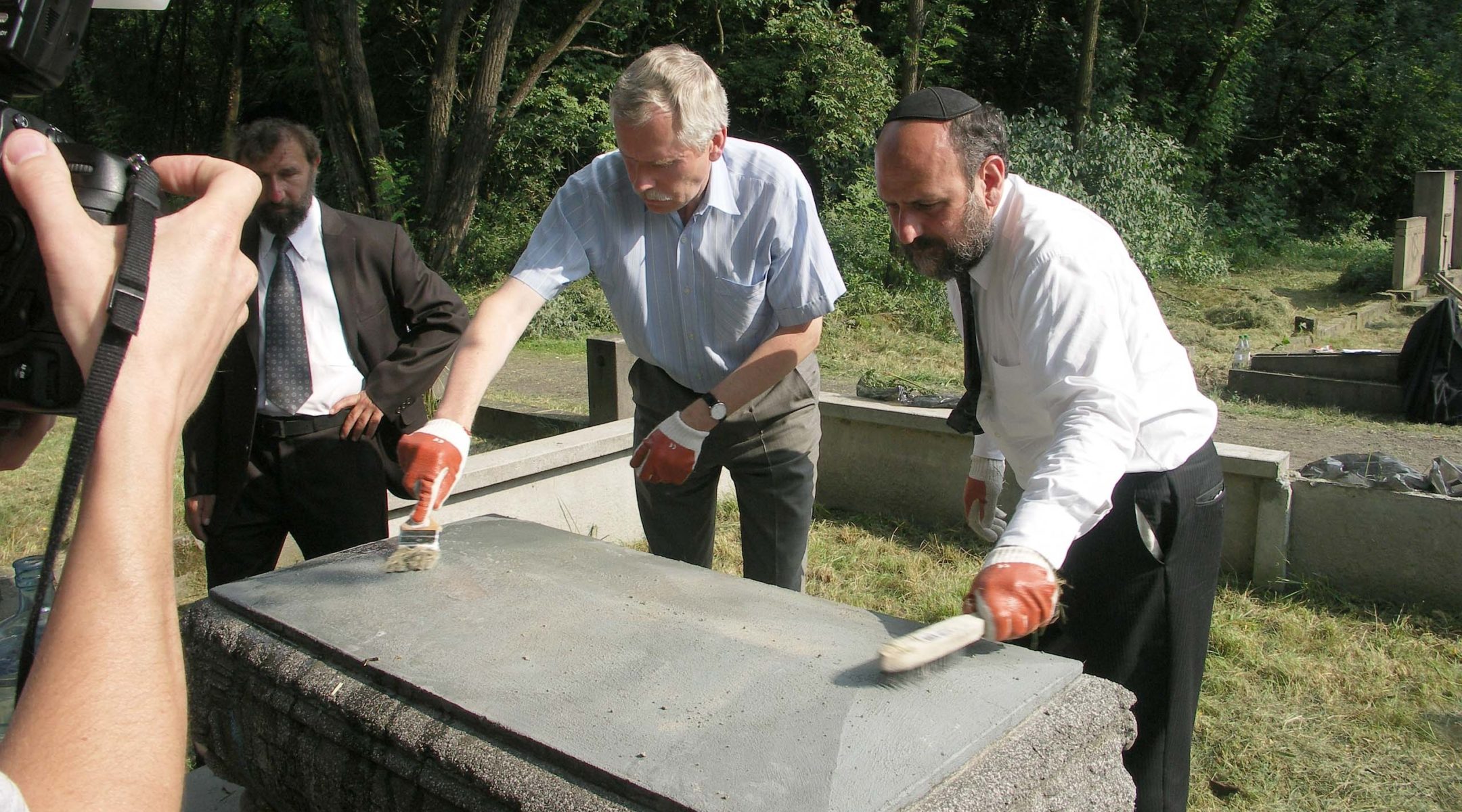 Michael Schudrich, left, the chief rabbi of Poland, and Czestochowa Mayor Tadeusz Wrona clean up a gravestone on Aug. 7, 2007 in the town's Jewish cemetery, which was badly desecrated. (Courtesy of Czestochowa Mayor's Office)
Advertisement

On Sunday, police discovered that some 100 graves in the Jewish cemetery of Czestochowa were covered with anti-Semitic graffiti. On Tuesday the cleanup began in the southern Polish town.

“We are here together in order to say that we are taken aback with what happened and we want to quickly as possible get rid of these horrible symbols,” Czestochowa Mayor Tadeusz Wrona told JTA, speaking by phone from the cemetery.

Swastikas, skinhead symbols and a Magen David in a noose, as well as the phrase “Juden Raus,” or “Jews Out,” were among the graffiti spray-painted by unknown perpetrators.

Polish President Lech Kaczynski decried the desecration in a letter to the head of the town’s Jewish organization.

There are 4,500 headstones in the Jewish cemetery, founded at the end of the 18th century and one of Poland’s largest. About 40,000 Jews lived in Czestochowa before World War II, comprising one-third of the city’s population. Only 5,000 survived the Holocaust. About 100 Jews live there now.

At the cleanup, Wrona said: “Today our city is very open and positive to Jews both here and around the world. This terrible incident is not going to change that.”

Poland’s Chief Rabbi Michael Schudrich said the city “has made more efforts to commemorate its Jewish history than any city of its size in Poland.”

“Poles feel things like this are not supposed to happen here,” said Schudrich, who with the mayor and a local priest cleaned a swastika from a grave.

He said he was not disappointed that only 22 town residents showed up for the afternoon cleanup, since it was announced just hours before and most town residents were either at work or away on vacation.

City officials have worked closely since the end of the communist regime with philanthropist and Czestochowa native Sigmund Rolat to recover the city’s Jewish past.

Rolat informed the police about the vandalism after he visited the graves of his family. He had recently funded the cemetery’s renovation so it could be open to the public.

“I am never speechless, but I couldn’t speak for several minutes after seeing stone after stone covered with these signs,” he said Tuesday by phone from New York. “This was unbelievably shocking.”

Rolat, who lives in New York and Florida, sponsored a photo and historical exhibition of the Jews of Czestochowa that began traveling across the United States in 2004.

Along with the Taube Foundation, Rolat and the national government support “Inspired by Jewish Culture,” an annual nationwide art school contest to depict Jewish life in Poland.

City officials have also helped host several Czestochowa reunions of Jewish natives and their descendants. The most recent one featured a giant sukkah built by students from the local art school.

About a dozen students from that school were on hand to help with the cemetery cleanup. Local Jews also turned out to begin the work, which will be completed over the next week by paint removal experts.

Rolat said the inauguration in June of a Jewish culture center in Czestochowa may have given some extremists a motive to vandalize the cemetery.

The Polish media have noted a rising number of racist incidents in the region in recent years.

Rolat was hoping the desecration could lead to a commitment from the city to provide better security for the cemetery, with regular patrols and perhaps a permanent watchman.