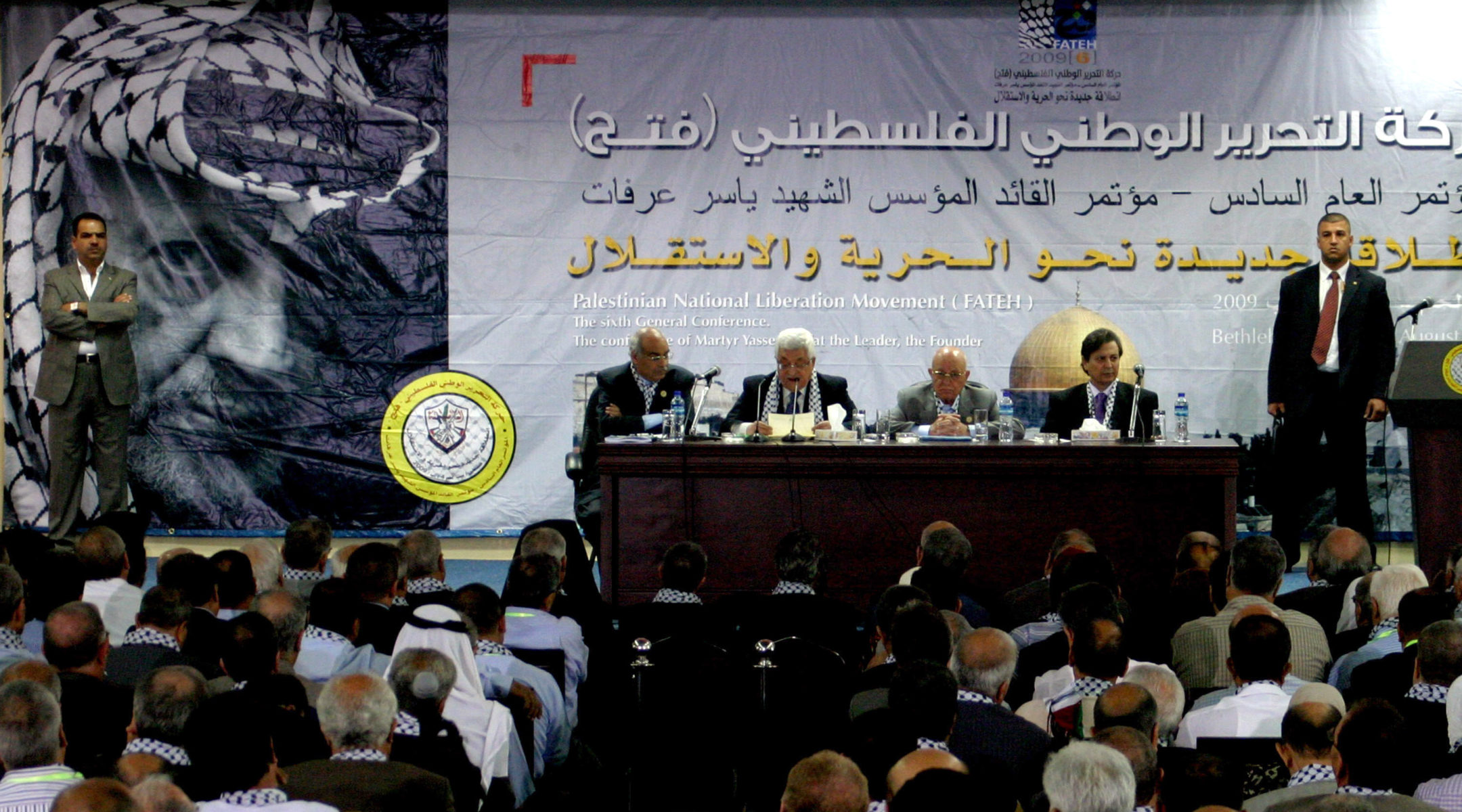 Jewish leaders criticized the rhetoric at last week's Fatah General Assembly in Bethlehem in which party leaders failed to renounce the use of violence and charged that Israel killed Yasser Arafat. (Issam Rimawi / Flash90 / JTA)
Advertisement

WASHINGTON (JTA) — The fiery rhetoric at last week’s Fatah meeting in Bethlehem has renewed concerns that the Obama administration is not doing enough to pressure the Palestinians.

At the first Fatah General Assembly in 20 years, participants refused to renounce violence and passed confrontational resolutions, like one blaming Yasser Arafat’s death on Israel.

Even as Jewish organizational leaders condemned the assembly, many of them acknowledged that Fatah leaders would remain Israel’s chief Palestinian interlocutors for peace talks. But they urged the Obama administration to issue a condemnation of the harsh talk at the West Bank parley.

“We would like to see this administration express some disappointment on some of the rhetoric coming out” of the conference, said Anti-Defamation League National Director Abraham Foxman. “It’s not in line with the American initiative to bring the parties closer together.”

But other Middle East observers, including some who have supported the Obama administration’s calls for an Israeli settlement freeze, cautioned against such an approach. While some of the language used at the Fatah meeting may have been troubling, they said, the White House might be better off if it stayed focused on the broader picture and not necessarily respond to specific rhetoric.

Thus far, the Obama administration has said nothing, with the State Department passing up a chance to make a statement. State Department spokesman Robert Wood was asked at Monday’s media briefing about the party platform Fatah adopted at the assembly including the position that the group “maintains the right of resistance by all means possible.”

“I haven’t seen the plan” Wood said, and simply reiterated “the importance of both parties” implementing “the ‘road map’ obligations, not taking any steps that in any way prejudge the outcome of future negotiations.”

Some corners are viewing the administration’s lack of response to the conference rhetoric as another example of what some Jewish leaders have charged is an imbalance in the pressure being applied by the administration on Israel compared to the Palestinians and Arab states.

President Obama has told Jewish leaders that pressure is being placed as well on the Palestinians and Arab governments, and suggested that perceptions of an imbalance are largely created by the media. But while the administration has made repeated public demands on Israel for a settlement freeze, it has said little publicly about the necessary steps that the other side must take, though Obama has issued general calls on Palestinians to stop incitement.

Several Middle East observers said they had only read media accounts of the Fatah party platform and not seen the full document. According to the reports, the platform reportedly reiterates “the Palestinian people’s right to resistance to occupation in all its forms in line with international law”; Fatah leaders asserted in statements that they reserved the right to “armed struggle.”

In his speech to the conference, though, newly re-elected Fatah chairman and Palestinian Authority President Mahmoud Abbas did stress that the Palestinians would focus on “nonviolent” resistance.

Some Israeli officials and officials at U.S. Jewish groups also criticized what they viewed as unreasonable demands made by Fatah at the assembly, such as proclaiming it would not negotiate with Israel until the Palestinians were given all of Jerusalem. Others downplayed such positions, saying that both sides usually posture by making maximalist demands before a negotiation begins.

Another complaint: Some who have engaged in violence and terrorism were honored and spoke at the parley.

Israeli government officials have been weighing in on the congress. Before the weekly Cabinet meeting Sunday, Defense Minister Ehud Barak said “the rhetoric coming from Fatah and the positions being expressed are grave and unacceptable to us.” The next day, Foreign Minister Avigdor Lieberman told a group of visiting Democratic U.S. Congress members that the Fatah platform, along with unrest in the West Bank and Gaza Strip, “has buried any chance of  coming to an agreement with the Palestinians in the next few years.”

The American Jewish Committee called the assembly “a slap in the face” to those interested in peace. Jason Isaacson, the group’s director of government and international affairs, specifically pointed to the resolution charging Israel with the death of Arafat as “a signal of the lack of seriousness” of Fatah.

“How is that acceptable in a political movement trying to operate on the world stage?” he asked, also criticizing the “wink and nod about the return to armed struggle.”

“We naturally hope the administration” would view the conference “with the same sense of concern that we have expressed in our statements, unless the bar of expectations is set so low that a disappointing conference isn’t worth commenting on,” he said.

One Middle East insider who declined to be identified was more blunt about the administration’s need to respond.

“This silence is what creates the impression of the imbalance,” the insider said. “Where is the condemnation for this kind of behavior?”

“This rhetoric impacts the street,” said Malcolm Hoenlein, the executive vice chairman of the Conference of Presidents of Major American Jewish Organizations. “We’ve learned you can’t dismiss the issue of incitement.”

But other observers suggested that the administration should be more cautious about condemnation.

Nathan Brown, a political science and international affairs professor at George Washington University and an expert in Palestinian reform, had not seen the full Fatah platform. Still, he said, it should be viewed as akin to a U.S. political party platform that might contain some “red meat language” to satisfy the political factions in a “large and diverse movement” like Fatah but isn’t necessarily followed by the party leaders.

Brown said what was more important was whether the Fatah leaders elected at the assembly would form a “coherent” organization dedicated to a diplomatic solution and whether they continue to “do what the Israelis want them to be doing” on security and other issues, something that won’t be known for a few months.

Americans for Peace Now spokesman Ori Nir, whose organization has been supportive of Obama’s approach, said that while some of the “hyperbole” from the Fatah congress was “troubling,” he didn’t think “micromanagement” of inflammatory statements by Palestinians or Israelis would be helpful to peace efforts. Nir also put a positive spin on the excerpts of the party platform he had read, noting that while they were still holding out violence as an option, the platform “adheres to the peace option.”

No matter their interpretation of the Fatah assembly, there was general consensus that Fatah is still the only game in town when it comes to a peace partner for Israel — which is why the group’s actions should be taken seriously.

Not everyone agreed with that assessment, though.

“This conference made it crystal clear,” said Zionist Organization of America President Morton Klein, that “peace is not possible with Hamas or Fatah.”