WASHINGTON (JTA) — At the 2010 AIPAC Policy Conference opening session, Washington Institute Director Robert Satloff described U.S-Israel tensions surrounding the announcement by the Interior Ministry of Jewish housing in Ramat Shlomo as 5 to 6 on the Richter scale: Not cataclysmic, but strong enough to cause some lasting damage.

U.S. Secretary of State Hillary Clinton in her AIPAC appearance reaffirmed America’s unshakable support for Israel’s security, but reiterated the administration’s view that East Jerusalem housing seriously undermines the cause of peace and argued that the status quo is inimical to Israel’s interests.

At times like this, I reflect back on 1977 in Jerusalem, as my Israeli friends and I watched with tears in our eyes as Anwar Sadat — the Arab leader who just four years before had led the devastating surprise attack under cover of Judaism’s holiest day — emerged from his plane at Ben Gurion Airport. Thousands of Israelis, thirsting for acceptance and normalcy, spontaneously lined the road from the airport waving little Egyptian flags.

The Washington-Jerusalem alliance historically has been based on a number of fundamental shared values and interests, one of which is the search for  visionary Arab leaders, like a Sadat, who are both willing to conclude and capable of implementing peace agreements with Israel.

The Obama administration believes that finding a solution to the Israeli-Palestinian dispute would have a transformative impact on relations with the broader Arab and Muslim worlds — a debatable proposition — and therefore it understandably wants both parties to refrain from taking actions that would undermine the negotiating environment.

The housing announcement during Vice President Biden’s recent visit to the Middle East to announce "proximity" talks was extraordinarily ill-timed, and Prime Minister Netanyahu offered an immediate apology. There are differences of opinion in Israel and among American Jews about whether the temporary freeze on construction in the West Bank should extend to East Jerusalem, as advocated by the Obama administration. Clearly the current Israeli government, consistent with all Israeli governments since 1967, does not believe it should.

Obscured in all of this brouhaha, however, is the fundamental political shift that has taken place in Israel over the past 10 years, which is supported overwhelmingly by the American Jewish community — acceptance of the two states for two peoples formula that would entail evacuation of a major portion of the West Bank and, based on previous negotiations conducted by former Prime Ministers Ehud Barak and Ehud Olmert, also a readiness to entertain creative arrangements in Jerusalem that would address Palestinian aspirations.

Israelis already understand that the status quo is unacceptable and that serious  compromises will be required to preserve the Jewish and democratic character of their state. And they are prepared to move forward on those compromises, but only if they can be convinced that a genuine and sustainable peace will be the outcome.

As Prime Minister Netanyahu asserted in his AIPAC address, "We are prepared to take risks for peace, but we will not be reckless with the lives of our citizens."

Jewish groups justifiably have urged the U.S. to press for more meaningful contributions from the Palestinians and our allies in the Arab world in the confidence-building arena. Palestinian Authority President Mahmoud Abbas and Prime Minister Salam Fayyad clearly have made significant strides toward responsible governance in the West Bank and economic development, in part due to Israel’s assistance in removing checkpoints and other barriers to movement — developments that should be acknowledged and encouraged.

Yet continuing anti-Israel incitement, the honoring of suicide bombers and murderers as "martyrs," an unwillingness to publicly and unequivocally recognize the legitimacy of the Jewish state are all actions by the Palestinian Authority that seriously erode confidence on the Israeli side.

Nor has the PA leadership even begun to prepare its public to understand that the Palestinian refugees’ "right of return" to homes inside Israel is totally incompatible with the two states for two peoples formula.

Even more problematic on the Palestinian side is the continuing de facto control of the Gaza Strip by the unrepentant terrorist group Hamas, which continues to be committed to Israel’s destruction. Any agreement with the Palestinian Authority would be limited in its effect to the West Bank, thus leaving a gaping hole in the effort to comprehensively resolve the Palestinian issue. Furthermore, despite the Obama administration’s urgings, precious little has come from the broader Arab world to reassure Israelis.

When the dust finally settles, the United States and Israel will be left with the need for the next Sadat or King Hussein of Jordan in order to achieve peace. Will the names Abbas and Fayyad be added to this very short list?

If they are, Ramat Shlomo will not be an obstacle. Today, as in 1977, the Israeli people’s palpable desire for a peace they can trust is so strong that no Israeli government would be able or want to stand in its way.

Finally, the U.S. and Israel cannot afford for one moment to divert their attention from Iran. The centrifuges keep spinning. 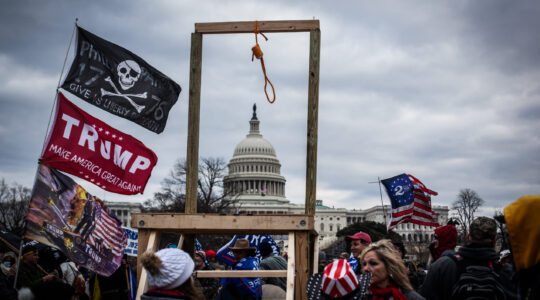 To truly heal as a nation, we must have a deep national reckoning