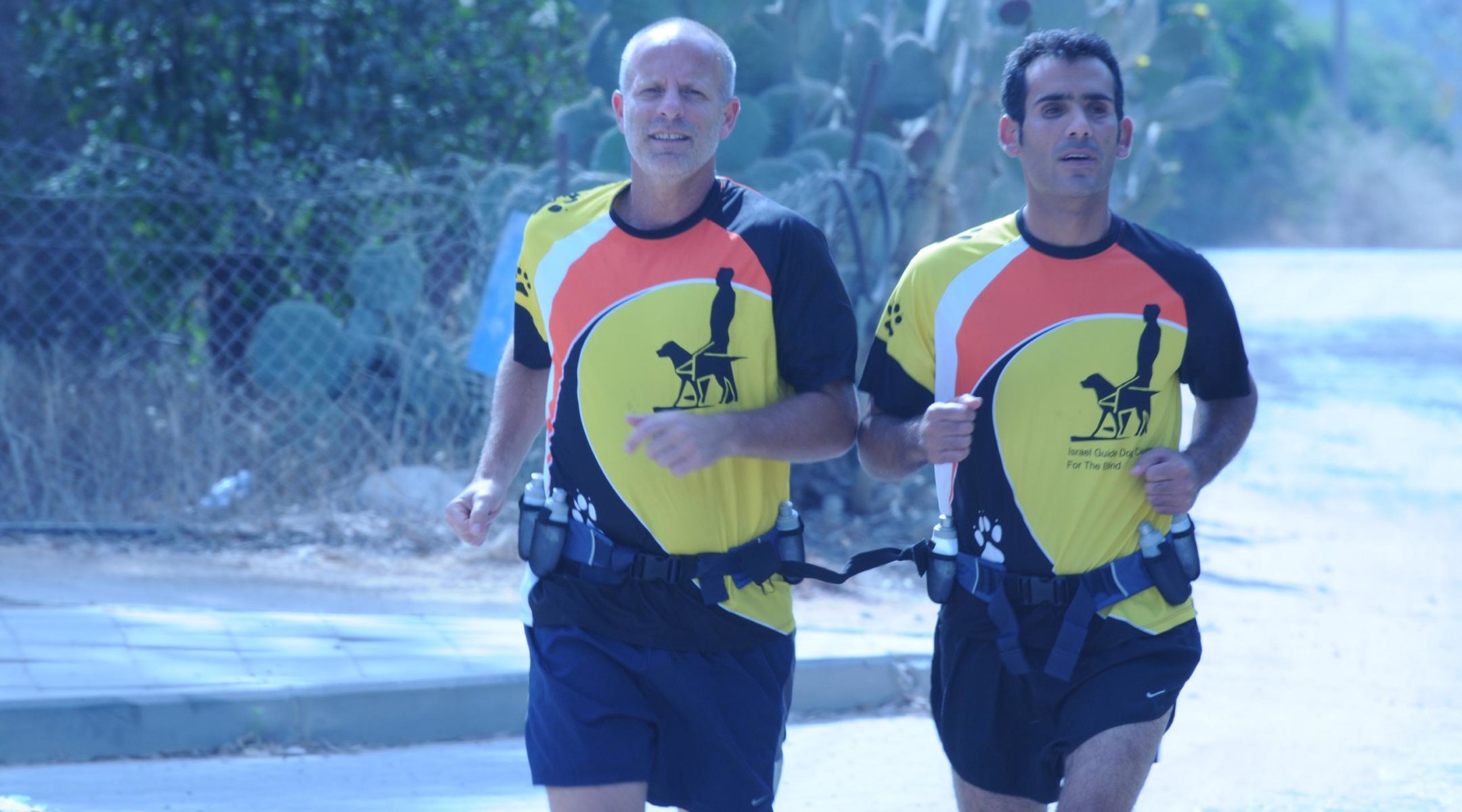 Noach Braun, left, and Gadi Yarkoni practice running tied to each other in preparation for the New York Marathon in November. (Courtesy of Michael J. Leventhal)
Advertisement

NEW YORK (JTA) — When Noach Braun and Gadi Yarkoni run this year’s New York City marathon on Nov. 7, they’ll be tied together at the hip — literally.

Yarkoni, an Israeli who lost his sight during combat in Lebanon 15 years ago, will be tethered by a strap to Braun, the director and co-founder of the Israeli Guide Dog Center for the Blind.

Their unusual four-legged run will be dedicated to other four-legged friends: seeing-eye dogs.

During their weeklong visit to New York in November, Braun and Yarkoni hope to promote and raise funds for Israel’s seeing-eye dog center.

“This run is an opportunity for me to expand my lifelong project,” said Braun, 49, who established the center nearly 20 years ago.

The training of each dog costs approximately $25,000. The dogs are then given free to blind individuals.

Yarkoni and Braun have spent much time learning how to run while tied to each other, and both called it an incredible bonding experience. Braun also said that running the marathon is an opportunity to combine two of his passions.

“I have been running for years; it is how I clear my mind,” he told JTA. “When I thought about running marathons for fun, it occurred to me that I should use it to run for the center, and the connection with Gadi, who is a neighbor of mine, was established.”

Both men live in Beit Oved, the city 20 minutes south of Tel Aviv where the center is located.

Yarkoni lost his sight after being struck by a bullet in his face during his Israeli army service in southern Lebanon. He had to adjust to a new reality in which he was dependent on others.

“After the injury, I realized I needed an everyday aid, and having a seeing-eye dog was a natural choice for me,” said Yarkoni, 36. “I have had dogs all of my life.”

Yarkoni said Braun had been trying to get him into running for years — unsuccessfully until recently.

“I try to keep myself active,” Yarkoni said. “I participated in a night run in Tel Aviv and it triggered me to get a personal trainer and start training for marathons.”

The first blind person to earn certification in physical therapy from Tel Aviv University, Yarkoni is now training intensively for marathon running. In addition to the New York Marathon, he also plans to run the Tiberias Marathon in Israel in January.

Braun said he hopes the New York Marathon, which is expected to draw about 37,000 runners this year, will spur interest in the Israeli Guide Dog Center for the Blind. Funded largely by private donors but with some Israeli government money, the Tel Aviv-area center has enough money to train about 30 dogs each year.

Although Yarkoni trusts Braun to lead him through the streets of New York, on any other occasion he said he’d rather have Timmy do the work.

“Dogs,” he said, “are just more trustworthy than people.”