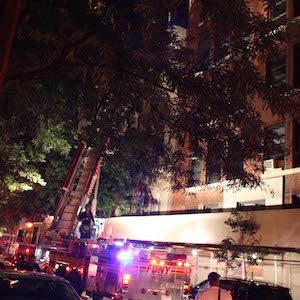 The four-alarm fire broke out Monday at the massive synagogue building on Manhattan’s Upper East Side at around 8:30 p.m, according to The Associated Press.

The fire caused the synagogue’s roof to collapse and severely damaged the building’s top floors.

Four firefighters sustained minor injuries quelling the blaze, which was brought under control an hour after it began, The New York Times reported.

The cause of the fire, which fire officials think began on the roof or top floor, has yet to be determined.

The 110-year-old synagogue building had been undergoing renovations. Religious articles had been removed prior to construction, so no Torah scrolls were damaged in the fire.

Congregation Kehilath Jeshurun is an Orthodox synagogue and one of the city’s most prominent Jewish congregations. It is led by Rabbi Haskel Lookstein, a major figure in American Modern Orthodoxy.