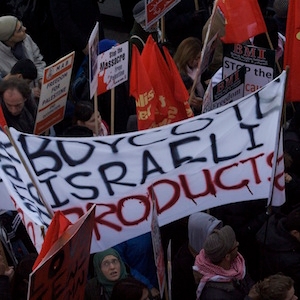 (JTA) — The flagship London branch of Ahava cosmetics is closing, citing biweekly demonstrations that have hurt its profits.

The Ahava store located at Covent Garden, a busy shopping area in the British capital, will close at the end of the week, the Israeli daily Yediot Acharonot reported. The company has other stores in the city, according to the report.

The store has been the site of large anti-Israel demonstrations for more than a year because it produces its Dead Sea cosmetics and lotions on the northwestern shore of the Dead Sea in the West Bank on land claimed by the Palestinians.

Four demonstrators went on trial earlier this year for chaining themselves to a concrete block inside the store.

“The demonstrations hurt our image and created negative media coverage,” an Ahava spokesman told Yediot about the decision to close. “We are a commercial company and so we must take cost-efficient considerations.”