Seinfeld to co-host ‘Live! with Kelly’ for 3 days 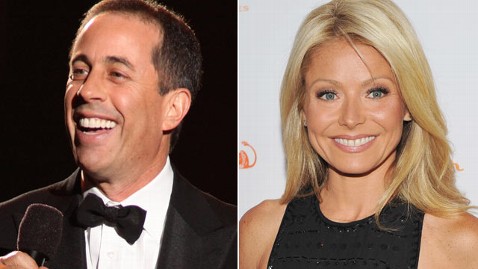 In 16 days, Regis Philbin will retire from hosting “Live! with Regis and (insert name of a blonde co-host here)” after 29 years of occupying the ABC mornings.

ABC has yet to say who will replace the veteran host, who has been suffering from health issues in recent years, but it has announced that Kelly Ripa will have some temporary co-hosts to ask the critical questions everyone is thinking when they watch network morning shows on at 9 am.

The first co-host will be Jerry Seinfeld, which is actually a pretty awesome move by the “Live!” people. According to the ABC website, the executive producer of the show said that “Jerry is a great friend of ours, and a friend of Kelly’s, and it doesn’t hurt that he’s an entertainment icon.”

Seinfeld will be on air Nov. 21st through the 23rd, and ABC already confirmed that there will be a good celebrity presence, including Jewish actors Jason Segel and Howie Mandel … and the least Jewish celeb ever: Miss Piggy. (So much for no bacon on this site.)