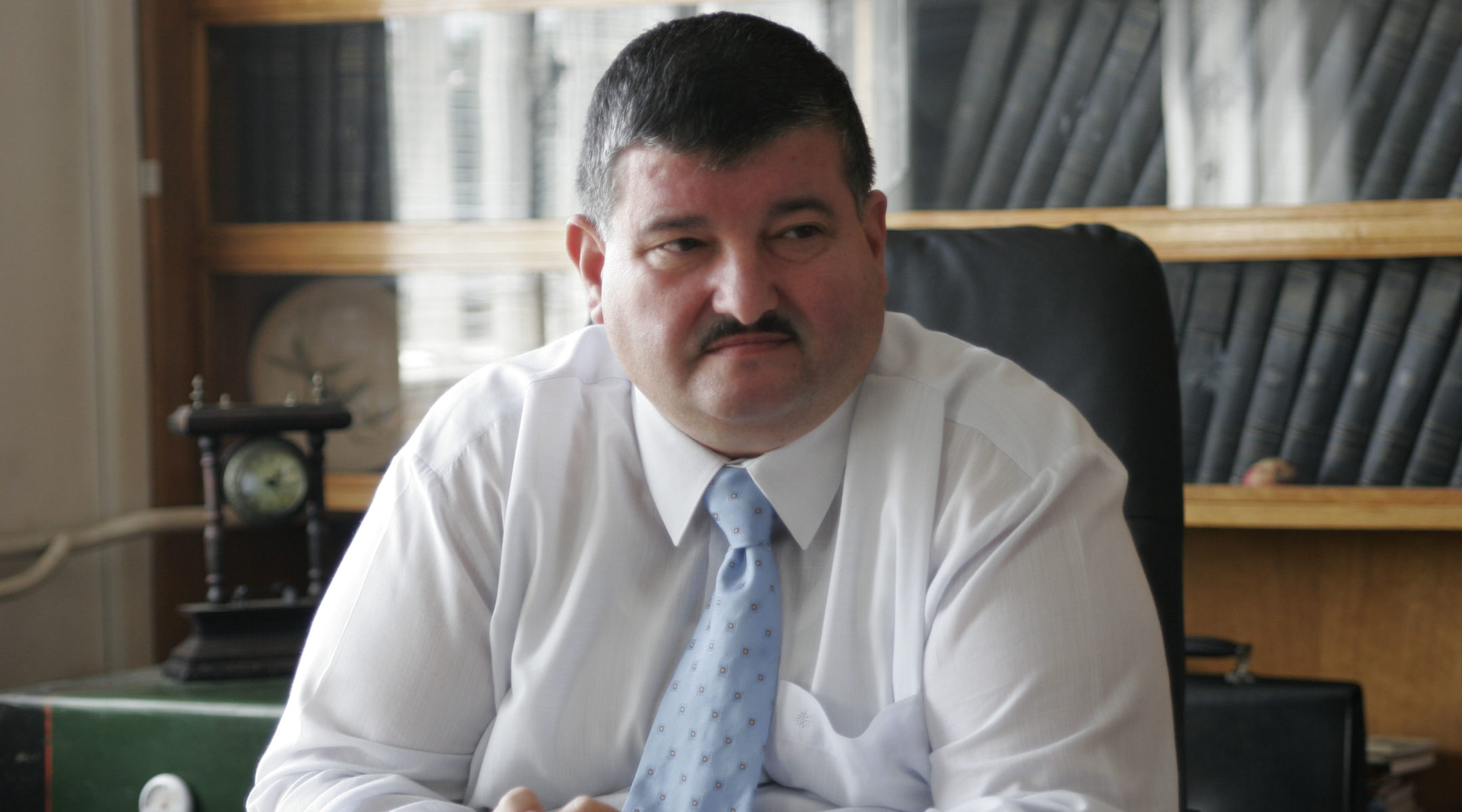 Yana Levy, left and her husband Harry and their three children inside their apartment in Sofia. (Courtesy of the Bulgaria office of the American Joint Distribution Committee)

SOFIA, Bulgaria (JTA) — The stories – some months or years in the making — started trickling in last year. Young successful families were showing up desperate.

Now she was getting calls from people her own age: thirtysomethings with well-paying jobs, nice homes and cars. People she’d never imagined were struggling.

They told her they’d fallen behind on their mortgage payments and the bank was threatening to take back their homes and their leased cars. People who had everything were facing the abyss of poverty.

“These people are not used to coming to the community to ask for help,” Dandalova said. “What we found was that by the time they come to the community … it was already too late to help them.”

Three years ago, Sofia’s upper-middle-class Jews were thriving. They were mostly in their 30s and 40s, supporting themselves, their children and their aging parents.

When the global economic crisis hit, the bottom fell out not just for the poor but for those, who like so many colleagues in the West were living higher than their incomes with insupportable mortgages and debts. Oil and food prices skyrocketed along with unemployment. The real estate market collapsed. People lost their jobs and lives began to unravel.

This contingent of “new poor” in the Jewish community was startling; the very people that needed help the most were the ones having the most difficulty admitting it. Instead of seeking assistance, they used the last of their savings to keep up pretenses.

“Usually people from the middle class think ‘OK, but there are more poor people, there are people who are more in need than we are. We can still fight and manage,’ ” Dandalova said. “But the truth is, they are getting to a situation where they really are desperate and cannot help themselves.”

Bulgaria’s economic crisis hit as hard as the one in Greece but has not received anywhere near the global attention. The national average income is less than $500 a month, money and power are in the hands of a few well-connected businessmen, organized crime is powerful and corruption is rife, said Maxim Benvenisti, president of Shalom, Bulgaria’s Jewish community organization.

Since 2009, unemployment in Bulgaria climbed from 6.8 percent to more than 10 percent from 2010 to 2011, according to the JDC. It is projected to drop only slightly this year.

The crisis revealed a particular weakness in the country’s small community of some 7,000 Jews who, after five decades under communism, reemerged after 1990 with the assistance of Israeli and Diaspora Jews. Today there are vibrant community structures and a growing membership, but there are few Jewish business owners and Bulgarian Jews have almost no political connections.

“Most in the Jewish community are employees, not employers; that is why the community is so poor,” said Alexander Oscar, president of the Sofia branch of Shalom, which has helped start an entrepreneurs’ program at the Jewish day school in the Bulgarian capital. “The resurgence of Jewish life and learning in our community goes hand in hand with the younger generation trying to be more independent and entrepreneurial and responsible.”

Oscar adds that because of the community support, “nobody will starve.”

“Everybody in winter has heating and basic supplies. But we also understand that young families in their 40s and 50s don’t just want to survive. We want a meaningful life,” he said.

Leaders quickly realized that not only the financial well-being of the Jewish community but its very existence was at stake, Benvenisti said.

“If they don’t receive community support, in my opinion their only chance would be to leave the country,” he said. “But this would mean sooner or later the Jewish community would shut down.”

This concern resonates with hard-hit Jewish families. Yanna Levy and her accountant husband struggled for years to care for their three children and Yanna’s blind mother. Their apartment has three beds and a single wardrobe for five people. The doors on the kitchen cabinets are falling off the hinges.

Levy, an optician, lost her job several years ago and struggled to find work. She now works part time as an elderly caregiver for the JDC. Even with the assistance the family receives, Levy chooses daily between necessities for her children and fights off “moments of panic.”

“I am aware I am raising a generation of immigrants, people who search for happiness abroad,” she said with sadness. “I am aware that even though I am raising three children, there will come a day when I will be alone because there is no future for them here.”

Meanwhile, the Shalom organization’s coffers took a hit with the dwindling of rental income from properties that the community acquired as part of post-communist restitution. So for now, many Bulgarian Jews are completely dependent on outside assistance.

By the end of last year, the JDC, working with Shalom, was suddenly and unexpectedly handling a 35 percent spike in its welfare caseloads. As a result, the JDC launched an appeal to donors for an additional $330,000 to supplement its 2012 Bulgaria budget.

The emergency programs help pay for basics: food, clothing, schoolbooks for children, covering household bills and vital medical care. But many of the efforts are aimed at ensuring the continuation of Jewish life. There are funds for every child who wants to attend Jewish summer camp and for community members to take part in Jewish holiday celebrations and events. There is even money to attend Limmud, the annual three-day international Jewish gathering for learning hosted by the Greek Jewish community.

JDC Europe director Alberto Senderey said the agency is creating a jobs training program that includes new skills training, resume building, and access to a computer and telephone. That, he hopes, will help people not only weather this economic storm but give them tools to become more self-sufficient and keep their dignity.

A first step is getting people to acknowledge that they are in trouble, but that’s only the beginning, Benvenisti said.

Most of the “new poor” — particularly managers in fields such as advertising and public relations — need help accepting their new realities.

One of Dandalova’s colleagues confided recently that her daughter ended up in the hospital in “psychological crisis” after she and her husband both lost their lucrative jobs at a telecommunications company at the same time.

Such people, Benvenisti said, need to be taught how to live differently.

“They are overqualified for unskilled labor jobs, and we are trying to support them and give them psychological help and help orient them to the current market,” he explained.

One indication of how the economic realities are sinking in: When word spread that caregiver jobs were open in a JDC program for elderly Holocaust survivors, more than 700 people lined up.

“People with several university degrees applying to take care of elderly and clean their houses,” said Tzvety Friedman, the JDC Bulgaria’s financial manager. “They were desperate.”

Levy got one of those jobs. Still, she and her husband are struggling to make ends meet and are making difficult choices. In early May, Levy signed her children up for swimming lessons. It meant she wouldn’t have enough for food at the end of the month, but she said it was too dangerous for her children to attend summer camp without knowing how to swim.

“What is frightening to me is that they say this is just the beginning of the crisis,” she said. “I cannot imagine what would become of us without the help of the Jewish community.”

With flights grounded, Indians who work in Israel are unable to get back to their jobs