The best of the ‘Good Guy Rabbi’ meme 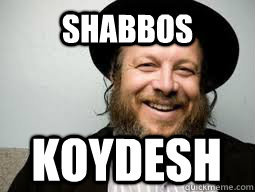 The internet world has created many anonymous stars, people whose names we don’t know but whose faces are now easy to recognize. We’re talking about captioned memes — mostly made famous by LOLcats, the cute photos of cats with on-purpose typos are the flag bearers of the phenomenon. But the internet has evolved from kittens to everyday humans to… rabbis. And a good guy rabbi at that — so tolerant, liberal and nice. Not like those tens of thousands of haredim rallying at New York’s Citi Field against the internet.

(Update: apparently the person in the picture is Yisrael Campbell, a comedian who converted to Judaism.)

So what can we say about “Good Guy Rabbi”?

1. He keeps the holiday season cheerful for everyone

3. He probably won’t change the channel when “Braveheart” is on

4. He knows some of the best looking female celebrities are Jewish

5. He is okay with a predictable sense of humor

6. He awards non-Jews with yummy treats

7. He wastes no time with the opposite sex

The internet loves you, rabbi!