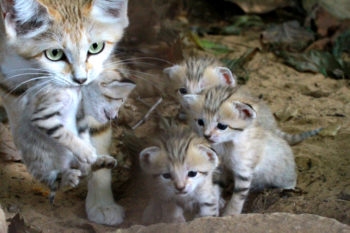 NEW YORK (6NoBacon) — A recent survey among users of the Jewish dating site JDate and its Christian counterpart ChristianMingle asked the question: “Who is your favorite political news funnyman?” Young Jewish singles prefer Jon Stewart, who finished first in a landslide, with 51 percent of the vote. Over at the Christian website, 39 percent of users cited Stephen Colbert, who is Catholic, with Stewart finishing a close second. Colbert finished third among JDate users with 18 percent  — behind HBO’s outspoken Bill Maher, who came in second with 23 percent of the votes, and ahead of Saturday Night Live’s “Weekend Update” host Seth Meyers (8 percent).

Sand kittens in the desert

The Ramat Gan Safari near Tel Aviv is not shy about sharing photos and videos of adorable baby animals, which in Internet terms are the largest attention grabber possible. Two months ago it was Terkel the baby rhino; this time the newest additions are four rare sand kittens, which born to Rotem the sand cat. Rotem made aliyah from Germany two years ago and joined a Polish sand cat that had arrived two years earlier, making the four new sabra fluff balls pure Ashkenazi sand cats. The sand cat is considered extinct in Israel, and every successful breeding attempt is a reason for local zoologists to celebrate — and for cat lovers to “ooh” and “ahh” over how adorable they are with their big ears. After growing up, the four sand cats will look for a new home, if anyone is interested and has a desert to spare.

A song for Mindy

A few weeks back, Mindy Meyer, the twentysomething New York State Senate candidate from Flatbush, Brooklyn, made headlines and became an Internet sensation with her unorthodox Orthodox campaign, which included an extremely bedazzled website and a series of video interviews. The Jewish pop-punk band The Groggers has weighed in with a tribute to the political diva — a catchy love song for her, which includes the lyrics, “We’ll reign over Brooklyn, You’ll be king and I’ll be queen, And I’ll even help you sound out the big words, In your people magazine.”

A viral Youtube video took us back to the simpler days of 1992, when a kid could dance to Madonna at his own bar mitzvah party without thinking twice. The kid is Shaun Sperling of Chicago, who recently decided to mark 20 years since the big day by uploading bar mitzvah party video that shows him dancing to the Madonna hit song “Vogue” while (get ready for this) wearing a button-down shirt with a huge portrait of the Queen of Pop on his back. It did not take long for the video of Sperling striking a pose to become a favorite among Jews, Madonna fans and pretty much every fan of good early-’90s lack-of-self-awareness video.

Kunis has been saving lives for years

The British Daily Mail came across an old 1994 episode of the cult lifeguard show “Baywatch,” which featured none other than Mila Kunis, then 11 years old. Kunis, who turned 29 last week, played a smart young girl in the episode “Aftershock,” and even saved the lives of two of her classmates. This doesn’t come as a surprise, since a few months ago Kunis actually saved the life of a man who was choking. Kunis is also not the only star to start his or her career at early age. Natalie Portman was 13 when she got her first major role in the film “Léon: The Professional,” Scarlett Johansson starred in the movie “Manny & Lo” when she was only 1, and Joseph Gordon-Levitt had his own show at age 10, although it was canceled after just a few episodes. None of them, by the way, was as cute as Sarah Michelle Gellar, who at age 4 was the face of Burger King, and adorably protested McDonald’s lack of beef in their burger patties.

Ever wandered the streets of Tel Aviv in search of public restrooms, only to find that that their appearance may resemble a scene from the movie “Alien” and that you are forced to cover everything around you in toilet paper using the tips of your fingers? Well, worry no more, because Tel Aviv is now a proud member of an exclusive list of cities offering boutique restrooms. For three shekels (about 75 cents) you can enjoy themed bathroom stalls (Tel Aviv beach and skyline, for example), endless spoiling toiletries and even personal music to set the mood. They look so nice and clean that it is surprising people don’t just move there, given the skyrocketing housing prices.

What happens if you watch “The Ten Commandments” backwards?

One of the most fun Internet games around is called “If You Watch the movie X Backwards, It’s About Y,” and it has a simple premise — you think about a movie and analyze what would be the outcome if you watch it from the end to the beginning. The website Uproxx weighed in on “The Ten Commandments,” revealing a horrific alternative reality: If you watch the Charlton Heston classic backwards, Moses finds a bunch of free Jews in the desert, takes them to Egypt, seals them behind a wall of water and turns them into slaves. At this point you should be thankful that life goes forward and not backward, and also that the Internet exists so you can learn these fascinating facts.