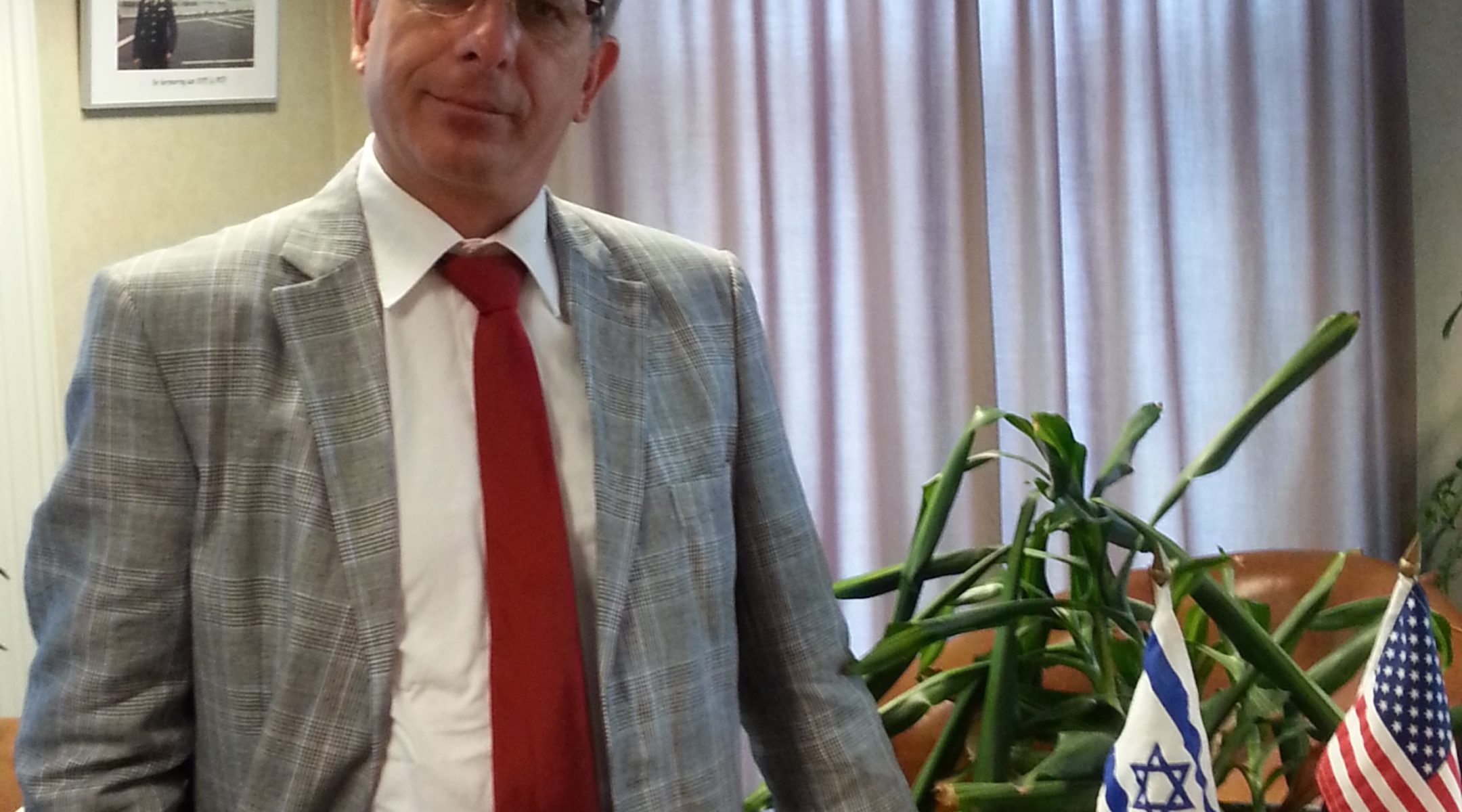 Wim Kortenoeve, a pro-Israeli Dutch lawmaker, in his office at the Dutch parliament in The Hague. (Courtesy Wim Kortenoeve)
Advertisement

THE HAGUE (JTA) — With little time to prepare his next move in trying to get the European Union to declare Hezbollah a terrorist group, Dutch lawmaker Wim Kortenoeven studies a copy of Lebanon’s trade agreement with Europe over a late-night dinner of Italian salad and German beer.

The effort to blacklist Hezbollah has become a major focus of Europe’s Jewish groups and other pro-Israel advocates, and Kortenoeven, a non-Jew with 12 years of experience lobbying for Israel, wants to get done as much as possible while he’s still in parliament. The former researcher for CIDI, a pro-Israel NGO, left the Dutch Party for Freedom in July in a dispute with party leaders and is not seeking re-election in the country’s Sept. 12 general elections.

Others involved in the campaign are cramming information, too. Their action plan needs to be ready for swift implementation in case Bulgarian authorities find Hezbollah was behind the deadly July 18 terrorist attack in Burgas. The attack, which Israel attributes to Hezbollah, left eight people dead, including six Israeli tourists.

“I’m sure the EU will eventually act on Hezbollah — after more EU citizens die in one of Hezbollah’s activities,” Kortenoeven says. “That’s the hard way. I’m trying to prevent this and get it done the easy way. The next attack could happen right here.”

Kortenoeven is on the terrace of Vapiano, a pasta bar across from parliament, which is situated in the same building as the Israeli Embassy. Behind him, the Israeli flag flaps in the brisk Dutch summer wind.

In Holland, Kortenoeven has good starting conditions for his efforts. In 2008, the Netherlands emerged as the only EU member to declare Hezbollah and all its branches terrorist entities. Britain considers only Hezbollah’s “military wing” a terrorist group. As a result, Hezbollah can freely operate all over the continent except in the Netherlands.

Europe is “Hezbollah’s lifeline, money laundromat and piggybank,” says Kortenoeven, who has written a book on Hamas.

Kortenoeven is preparing queries for the Dutch Foreign Ministry: He wants to know why the Netherlands, despite blacklisting Hezbollah, is nonetheless happy to remain a cosignatory to agreements between the EU and what he calls “Hezbollah-controlled Lebanon.”

Najib Mikati, a Hezbollah-backed Lebanese politician, was made prime minister in 2011 after Hezbollah’s opposition toppled the previous government.

Kortenoeven cites the 2002 trade agreement between the EU and Lebanon. Article 2 of the contract states that it is “based on democratic principles and fundamental human rights” — not Hezbollah’s forte, Kortenoeven says.

In parallel, pro-Israel groups and individuals across Europe are trying to get their local governments and EU institutions to follow the Dutch example.

In Brussels, B’nai B’rith Europe is preparing an action plan for lobbying the issue. The European Jewish Congress is bringing up the subject in meetings with EU officials and monitoring the investigation in Bulgaria. In France, the Jewish community is broaching the subject with the new president.

They all know that the U.S. State Department classified Hezbollah as a terrorist group 15 years ago, followed by Canada, Australia and New Zealand. The European Council, the EU’s foreign policy maker, is resisting pressures to follow suit.

In 2005, the European Parliament passed a non-binding resolution identifying Hezbollah as a terrorist group, but the EC has ignored it.

Even deadly attacks by Hezbollah on French nationals have not persuaded the French government to designate the Shiite group as terrorist, says Prasquier.

Last year Alain Juppe, then French foreign minister, accused Hezbollah of attacking French UN peacekeepers near Tyre. Six were wounded in the explosion. Still, Prasquier says he has not seen any change in the French attitude toward Hezbollah since his country’s recent presidential election.

The French, he says, remain concerned about the safety of their peacekeepers in Lebanon.

“Classifying Hezbollah as a terrorist group could expose these soldiers to risk, we are told,” he says.

Prasquier says the French and other governments may change their minds if the Bulgarians find Hezbollah is behind the July 18 attack.

He describes “a cynical reality” in which the EU classified Hamas as a terrorist organization in 2003, “since doing so was repercussions-free and because Hamas opposes the Palestinian Authority, which the French government supports. Hezbollah is a different story because it’s part of the Lebanese establishment. If you blacklist Hezbollah, you blacklist Lebanon.”

Germany is seen by observers as a major Hezbollah hub for fundraising and money laundering. The country’s domestic intelligence agency, the BfV, speaks in its annual threat report of some 950 Hezbollah supporters in Germany alone.

Without the EU policy to match that of the United States, few of Europe’s law enforcement agencies have legal basis for taking actions similar to what U.S. officials have done in blocking Hezbollah funds. On Aug. 21, the U.S. Treasury Department and the Drug Enforcement Agency confiscated $150 million from a Lebanese bank called LCB. Hezbollah had “routinely used” the bank to launder money in Europe, Latin America and Africa, the Treasury Department found.

The issue of getting Hezbollah listed as a terrorist group will be the main one on the agenda during a Sept. 2 work session in Brussels of the Foreign Affairs Network of B’nai B’rith Europe. The 20 or so participants will hammer out a new work plan to be applied shortly after EU institutions return later in the month from the summer recess. The plan: Highlight inconsistencies in EU policy on Hezbollah and Hamas, and compare EU policies to other Western democracies.

The immediate goal, Kantor says, is ensuring an impartial investigation in Bulgaria.

“The probe must not turn into another Buenos Aires,” he says, referencing the 1994 deadly bombing at the Jewish community’s main building in that city, leaving 86 people dead and another 300 wounded.

Kortenoeven and others know their challenge will not be easy.

Sebastien Brabant, a spokesman for Catherine Ashton, the EU’s representative for foreign affairs and security policy, told JTA that the union has no information that Hezbollah was responsible for the incident in Burgas. He added that the EU “does not currently have any information indicating that Hezbollah-affiliated persons could be about to commit, or planning to commit, actions targeted against the interests of an EU member state.”