Oh, it’s frying time again — but it doesn’t have to be 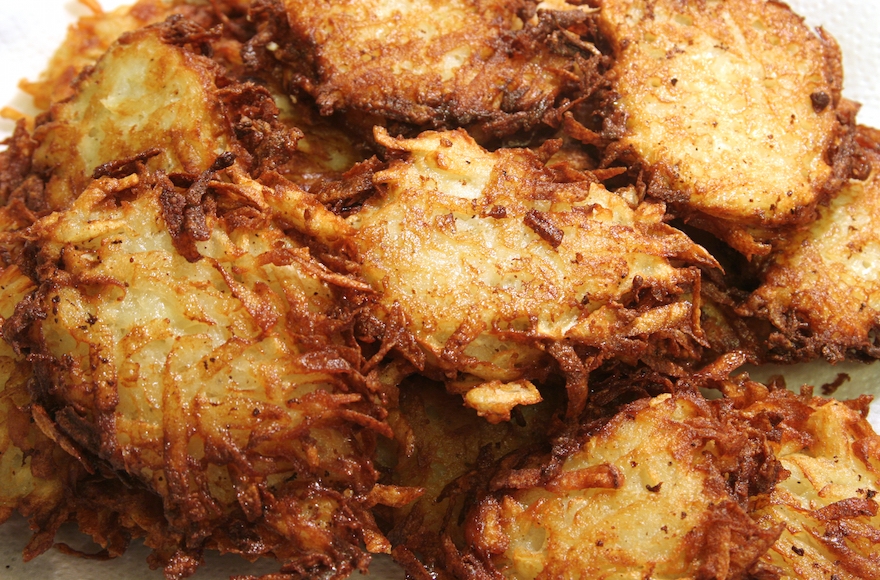 Latkes have not always been made of potatoes. (Shutterstock)
Advertisement

NEW YORK (JTA) — Gone are the days when the Chanukah holiday meant an eight-day binge fest of all things fried.

The Festival of Lights, which commemorates the Maccabean revolt against the Greeks, has a longstanding tradition of oily foods such as latkes and donuts in remembrance of the miracle of the temple oil, which lasted eight days instead of the expected one. But for some, the holiday has become an excuse to inhale fried potato pancakes and custard-filled pastry.

“People have a misconception of the tradition to fry on Chanukah,” Yosef Silver, the author of the popular blog This  American Bite, told JTA. “The concept is to remember the oil, but that doesn’t necessarily mean frying. We’ve gotten so wrapped up with frying, but there are ways to make Chanukah food, like latkes, just using oil.”

These days, with everyone from the first lady on down drawing attention to our widening waistlines, Jewish foodies have plenty of options for consuming traditional holiday fare without packing on the pounds.

Silver was raised on the old way — frying everything. But now he prefers to bake latkes rather than fry them.

“If you prefer to use the traditional potato latke recipe, the best way to make it healthy would be to pan fry it with an oil substitute like Pam,” Silver said. “If you want to incorporate oil, add only a tablespoon and lightly pan-fry it.”

For those who prefer a fried taste, Silver suggests swapping potatoes for healthier vegetables that provide vitamins and nutrition as opposed to starch.

“My favorite latke variety to make is my variation using rutabaga and turnip,” Silver said. “Rutabaga is a starchy vegetable, but it’s not actually a carb. It gives a similar consistency to potatoes and is delicious.”

Shaya Klechevsky, a personal chef from Brooklyn who writes the kosher cuisine blog At Your Palate, says there are ways to make healthier donuts, or sufganiyot — also a traditional Chanukah food though one generally more popular in Israel than the United States. But Klechevsky warns about playing too much with recipes.

“When making the batter, you can use a little bit of whole wheat if you want to veer away from white flour, but you need to be careful because too much whole wheat will turn your donuts into bricks,” Klechevsky said. “You can also substitute sugar with honey.”

Rather than altering the recipe for the dough, Klechevsky says the best way to make healthy donuts is to use healthy fillings, like sugar-free jams, nuts, fruit and granola.

“The best option is to bake donuts rather than fry them,” Klechevsky said. “The taste won’t be the same, but it will be close. You can buy little round molds and fill them with batter.”

Erica Lokshin, a wellness dietitian at Sloan Kettering Cancer Center in New York, points out that baked donuts have half the calories and one-third the fat of fried.

“Chanukah foods loaded in oil are high in cholesterol, which can be really bad for your heart, and eating them for eight says straight increases risks,” Lokshin said.

Lokshin says that when serving toppings to go with latkes, reduced-fat sour cream and unsweeted applesauce are the best options. And since no one wants to feel deprived around the holidays, she suggests picking one night to indulge.

“It’s better to designate which night of the holiday you will enjoy latkes and donuts, and stick to your regular eating routine on the other nights,” Lokshin said. “Otherwise, you’re picking at a donut here and a latke there, and over an eight-day period you will probably consume more than you hoped you had and it will throw off your eating routine in the long run.

Below are a couple of healthier latkes recipes.

Preparation:
Preheat oven to 425 degrees. Line a baking sheet with foil and spray with olive oil, or take a pastry brush dipped in olive oil and lightly coat the foil. Place grated carrots in a large bowl; press with paper towels to absorb any moisture. In another bowl, combine flours, salt, baking powder and pepper, and blend together. Add carrots, ginger and eggs to the flour mixture and combine. Mixture shouldn’t be too wet or too dry. When forming patties, the mixture should stick to itself and not come apart. If it’s too wet, add a little bit more flour; if it’s too dry, add more beaten egg. Allow to stand for 10-12 minutes for ingredients to absorb into each other. Place patties, about 3 1/2-inch rounds, onto the greased baking sheet. Leave a little room around each one. Place tray into middle rack of oven and roast for 10-12 minutes per side, or until golden brown. Makes about 15 latkes.

Preparation:
Preheat the oven to 375 degrees. Mix all the ingredients, then shape the latkes so they are approximately the size of your palm and about 1/4-inch thick. Grease a cookie sheet with olive oil if you want to keep with tradition, or substitute coconut oil for a lighter alternative. Place the latkes on the cookie sheet with space between them. Once the oven has heated, bake the latkes until golden brown.