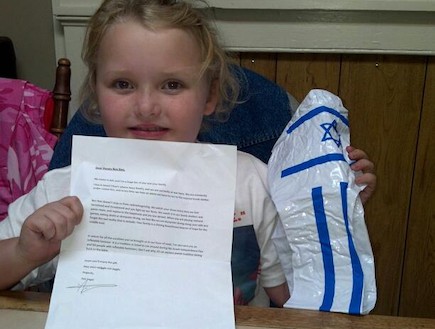 Are the publicity problems Israel has been suffering lately finally over? Or did they just get worse?

In the wake of the U.N. vote that granted the Palestinians an observer status and was considered a landslide defeat by Israeli politicians, and just days after even Sonia Manzano Sesame Street’s favorite Latina resident, Maria, called Israel “bullies,” the rescue came from a very very special person – Honey Boo Boo.

Dear Honey Boo Boo,My name is Adi, and I’m a huge fan of you and your family. I live in Israel (That’s where Jesus lived!), and we are currently at war here. We are constantly under rocket fire, and every time we hear an alarm we have to run to the nearest bomb shelter.But that doesn’t stop us from redneckognizing (Israel’s right for self defense). We watch your show every time we feel terrorized and threatened and you light up our faces. We watch it in our bomb shelters and panic room, and rejoice in the happiness and joy you spread. When you are playing redneck games, eating sketti or dumpster diving, we feel like we are dumpster diving along your side and forget the sad reality that is outside. Your family is a shining beautimous beacon of hope for the middle east.In return for all the sunshine you’ve brought us in our hour of need, I’ve also sent you an inflatable hammer. It is a tradition in Israel to run around during the Israeli Independence Day and hit people with inflatable hammers. Don’t ask why, it’s an ancient jewish tradition dating back to the bible.Hope you’ll enjoy the gift.May your vajiggle not jaggle.Regards,Adi Segal

And as a result, the toddler in tiara actually took a photo of herself with the letter and the inflatable hammer (as shown above) and posted on her Facebook page!

Is this the next step in Israeli Hasbarah?

Is it connected to the recent firing of the Israeli Deputy Foreign Minister Danny Ayalon?

I hope next year we will be able to watch the show “Land of Milk and Honey Boo Boo.”