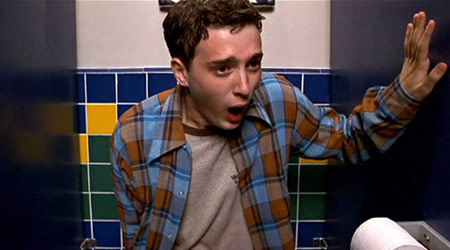 Eddie Kaye Thomas, better known as Finch, the sophisticated high school kid who boned Stifler’s mom in “American Pie,” had quite the one night stand.

Apparently a SWAT team was called to his Hollywood Hills home on Wednesday afternoon after a woman allegedly threatened to stab him with a kitchen knife while barricading herself inside.

According to TMZ, the two met the night before at Mel’s Diner in L.A., and the woman spent the night. The next day, the two got into an argument, and the woman pulled the knife, and in addition damaged some property inside Thomas’ house.

Thomas called 911 and when the SWAT team arrived, used some tear gas and flash bang granadas and eventually took the woman into custody Wednesday evening.

Thomas himself appears safe, but he should probably learn from his “American Pie” character and go for more mature women.