Op-Ed: Jewish leaders must be vocal in backing Kerry’s mission 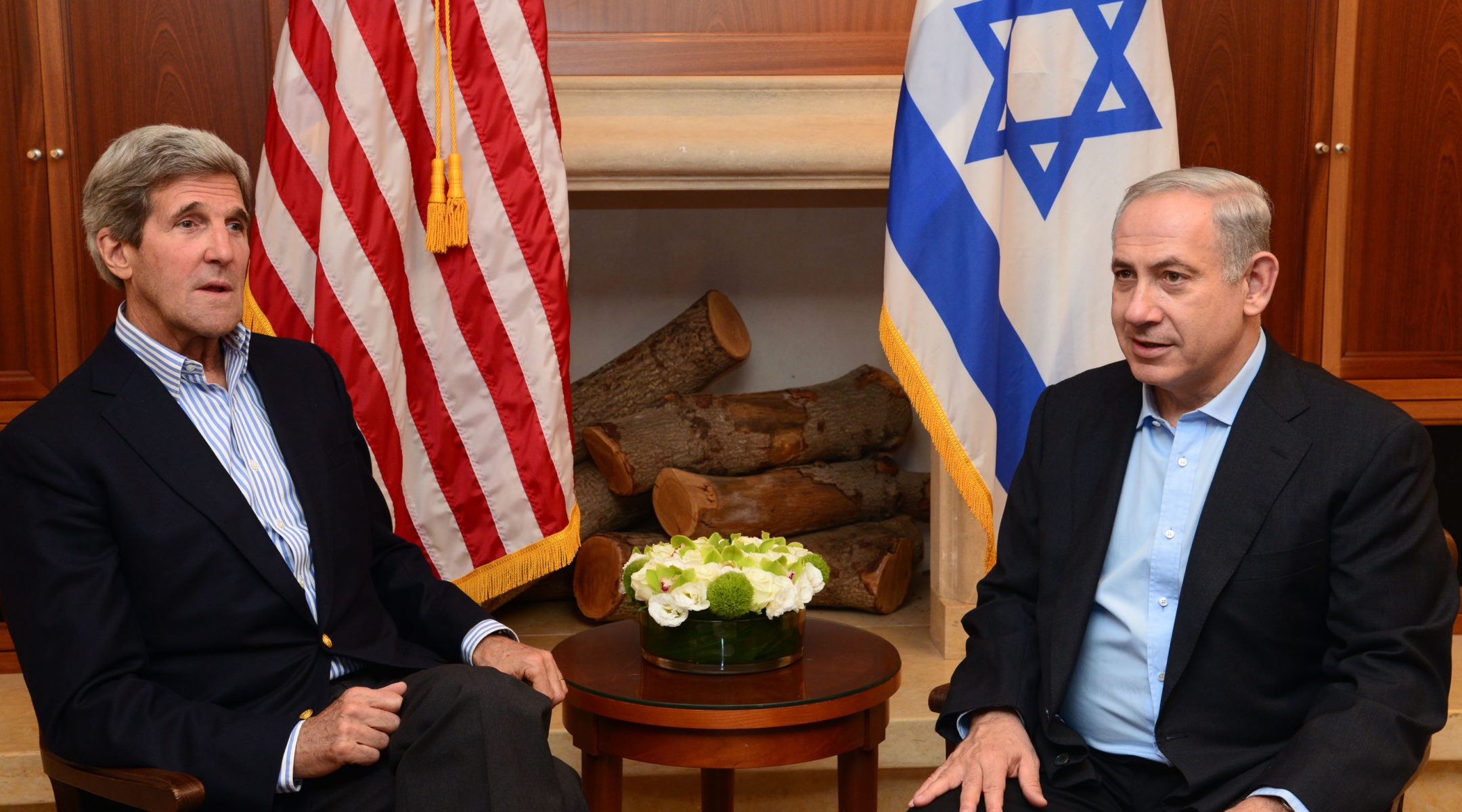 (JTA) — Secretary of State John Kerry’s recent four days of meetings in Jerusalem and Amman yielded no breakthrough and no Israeli-Palestinian negotiations.

One hurdle he must overcome: 42 of the 120 members of the Israeli Knesset vehemently oppose a two-state solution. Though those 42 members comprise only one-third of the Knesset, they hold nearly every important position in the government and the Knesset, and have a stranglehold on the actions of the government. They are strongly committed to settlements and occupation. (Prime Minister Benjamin Netanyahu is not included in this list, according to his own statements.)

On the other hand, the center-left half of the Knesset has not been able to focus public attention on the major issue: Will Israel survive as a Jewish and democratic state?

As a result, the current Israeli government is unwilling to take the actions needed to attain a two-state solution, the only way to secure Israel’s survival as a democratic homeland for the Jewish people.

Kerry’s commendable efforts in the region can change this gloomy reality and overcome the prevailing pessimism, but mainstream voices in the American Jewish community must actively support his initiatives. American Jewish leaders and organizations need to urge the Obama administration to bolster Kerry’s mission and transform it into a much more proactive one.

For example, he should present both Israeli and Palestinian leadership with a made in America, “take it or leave it” offer. If it is based on the fall 2008 understandings between then-Israel Prime Minister Ehud Olmert and Abbas, the gap between the parties is bridgeable.

One of the main reasons the administration has not been tough or more proactive is the perception that doing so would harm President Obama politically. Obama’s political opponents have succeeded in portraying the Jewish community as staunch supporters not only of Netanyahu, but also of the 42 ultra-right-wing Knesset members of the Likud and Naftali Bennett’s parties who shape Israel’s policies. This perception is mistaken. But it is causing Kerry to operate with one hand tied behind his back.

It is the timid behavior of the mainstream American Jewish community that is allowing this to happen. With only a few exceptions, community leaders and organizations have not publicly supported Kerry’s efforts; they have not condemned the expansion of settlements or the soft treatment of settlers’ violence against Palestinians; they have not called on Netanyahu to repudiate statements by his own ministers that undermine the two-state solution. American Jews can no longer be the silent majority. This is a critical moment for the viability of the two-state solution.

A detailed offer now from Kerry will compel the Israeli public to decide whether or not it wants an agreement with the Palestinians — a clear choice they have not been given since May 1992, when Yitzhak Rabin ran against and defeated Likud leader Yitzhak Shamir.

The late Rabin believed that the Oslo Agreement was a strategic imperative for Israel in order to face its most dangerous foe, Iran. To be able to confront Iran, he believed, Israel must make peace with its immediate neighbors.

The expanding sectarian conflict in the Middle East between Sunni and Shia adherents, the upheavals in Syria and Egypt, and the recent softening of the Arab Peace Initiative present an opportunity to the United States and Israel to address the Palestinian and Iranian issues and advance important American and Israeli interests.

The U.S. can build a new regional axis to confront Iran and the radical Islamists. It should be based on the Gulf states — Bahrain, Kuwait, Oman, Saudi Arabia and the United Arab Emirates — plus Jordan, Israel and Palestine.

The new axis would provide an alternative model to the bloody chaos and economic incompetence of radical Islam, and would draw a clear line on the region’s map that Iran’s expansion cannot cross.

Senior Saudi officials in 2008 and Jordan’s King Abdullah in 2012 told the American author of this article that if Israel would end the conflict with the Palestinians, their countries would welcome the opportunity to join with Israel against Iran’s aggression.

Israeli-Palestinian peace is indispensable for the formation of this new alliance. It is also necessary to prevent the disappearance of the democratic Jewish state that Israelis fought for and American Jews cherish.

True, the fate of Israel is the responsibility of its citizens and the final decisions lie with them. But those in America who cherish the Zionist dream owe it to their commitment as Zionists to vigorously support Kerry’s mission and strong, decisive policy by Washington that will ensure Israel’s survival as a Jewish and democratic state.

(Ephraim Sneh, a fellow at the Israel Policy Forum, twice served as Israel’s deputy minister of defense and is chairman of the S. Daniel Abraham Center for Strategic Dialogue at Netanya Academic College. Robert K. Lifton was president of the American Jewish Congress, a founder and president of the Israel Policy Forum and co-chair of the Middle East Project of the Council on Foreign Relations. His memoirs, titled “An Entrepreneur’s Journey: Stories From A Life In Business And Personal Diplomacy,” have been published by AuthorHouse.)