Pope to visit Israel in May 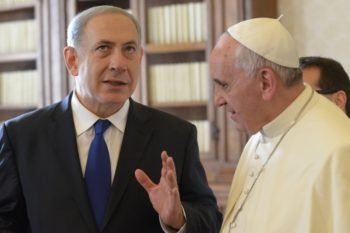 ROME (JTA) — Pope Francis will visit Israel in May as well as Jordan and the West Bank.

The pontiff made the formal announcement of his long-anticipated trip from his Vatican window before a crowd who had gathered in St. Peter’s Square on a rainy Sunday.

“In the climate of joy, typical of this Christmas season, I wish to announce that from 24 to 26 May next, God willing, I will make a pilgrimage to the Holy Land,” he said after celebrating Mass.

Francis said he would visit Amman, Bethlehem and Jerusalem.  The main purpose of the trip, he said, would be “to commemorate the meeting between Pope Paul VI and Patriarch Athenagoras” that took place 50 years ago, on Jan. 5, 1964.

Paul VI was the first pontiff to visit the Holy Land. Francis’ two predecessors, John Paul II and Benedict XVII, both made pilgrimages to the region.

Francis said his trip would include “an ecumenical meeting held at the Church of the Holy Sepulchre with the representatives of all the Christian Churches of Jerusalem, together with Patriarch Bartholomew of Constantinople.” He added, “As of now I ask you to pray for this pilgrimage.”

There had been speculation for months that the trip to would take place in the spring.

Francis had been officially invited to visit Israel on several occasions since he was elected pope in April, and he expressed his desire and intention to visit the Holy Land on more than one occasion.

Dec. 30 marked the 20th anniversary of the signing of the Fundamental Agreement that established diplomatic relations between the Holy See and Israel.