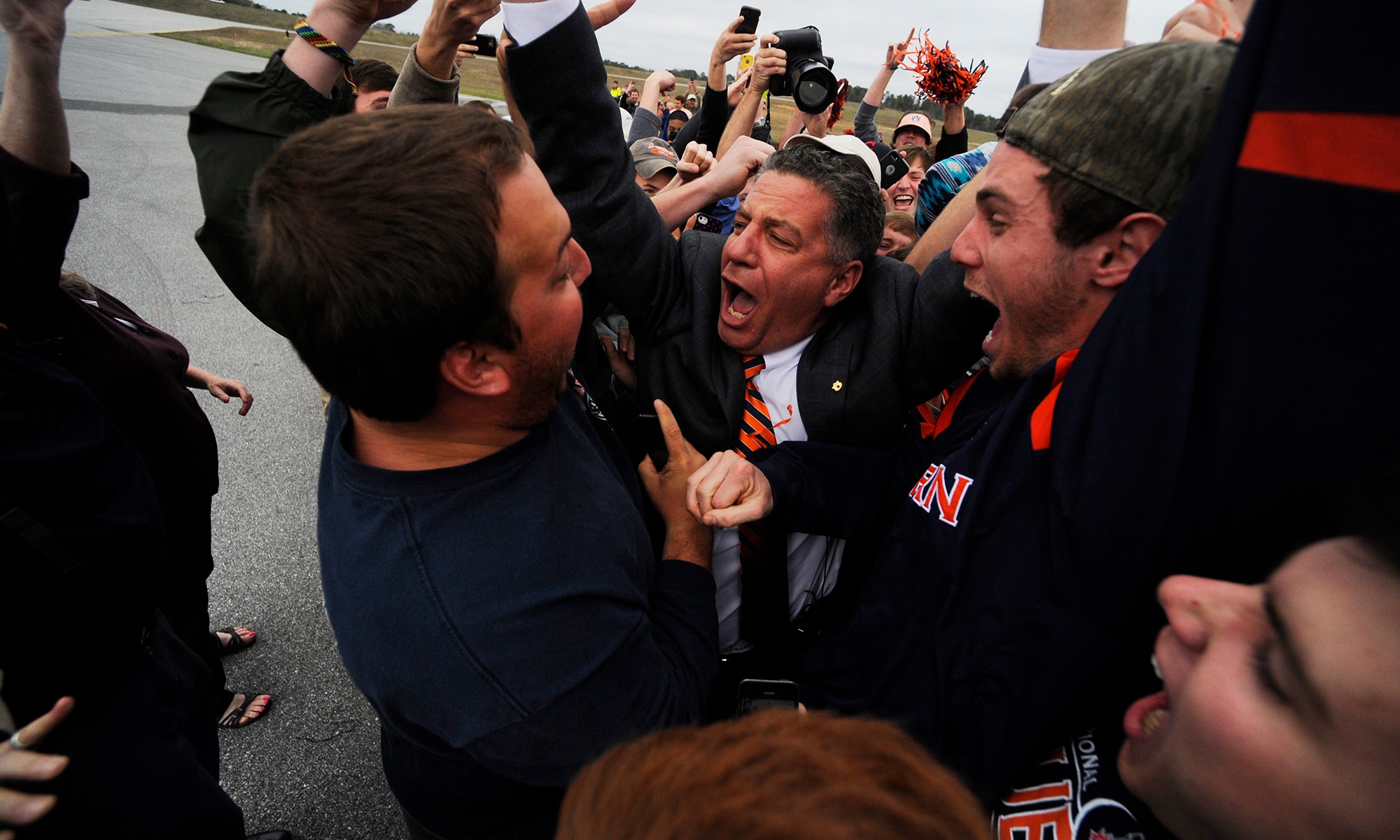 BALTIMORE (JTA) — Shortly after assembling the players trying out for the American squad he’d be coaching at the 2009 Maccabiah Games, Bruce Pearl brought them to Sabbath evening services at the Heska Amuna Synagogue in Knoxville, Tenn.

The passionate and gregarious Pearl, a veteran of reading the haftarah at Yom Kippur, led the services.

Now he’s bringing that spirit, enthusiasm and knack for leadership back into coaching.

The plan is for Pearl to guide the Auburn University basketball team for at least the next six years — the duration of the reported $2.2 million-a-year contract he signed last week.

Pearl, 54, is attempting to turn around both a program absent from the NCAA Tournament for 11 consecutive seasons and a career derailed after his dismissal from the University of Tennessee in 2011 for committing several rules violations and lying about them.

A contrite Pearl told JTA in a telephone interview Friday that he is “very grateful, very humbled” to become Auburn’s coach, and sees God’s hand involved.

“I did not think that God would put [the new job] in front of me this soon,” Pearl said from ESPN’s Connecticut studios, where he provided analysis for NCAA Tournament coverage.

After his firing at Tennessee, Pearl says he “jumped in with both feet” to jobs at the sports network and as a food company marketing executive. But returning to coaching remained his goal because the profession is “what I was born to do,” he says.

An NCAA-imposed penalty forbids Pearl from recruiting players until August, unless his new employer can “show cause” for aborting the penalty.

David Benedict, the chief operating officer of Auburn athletics, said Sunday that the Alabama university “has not done anything, nor is anything imminent,” regarding such an appeal.

“I thought with time left on my ‘show cause’ that maybe in a year from now [I’d be hired],” Pearl said, adding that he wanted prospective employers to determine “that what I did was a mistake that I paid dearly for, as opposed to a real character issue.”

It’s a mistake with which Pearl still grapples.

“I wake up every morning and ask God to forgive me for failing Him,” he said. “That’s why the whole episode was — is still — so painful for me. I don’t care whether you think I’m a good coach. It really bothered me that you’d care that I’m a good person.”

Pearl says a belief in God helped him emerge from the scandal a better man.

“Actually, my faith has never been stronger,” he said. “Having gone through this, it is the biggest thing I’ve leaned on.

“I never asked God why; I know why. I put that on myself. I made those choices and I let Him down, but at the same time, this would not be here if God still didn’t love me and forgive me.”

The former Virginia Tech coach Seth Greenberg, an ESPN colleague, says he is thrilled that Pearl has received another chance to coach.

“He’s going to do great,” said Greenberg, whom Pearl consulted about the new job.

At Auburn, the life-embracing Pearl can be expected to mesh X’s and O’s with precious sound bites and stunts supporting other campus teams, as he did at Tennessee.

Pearl’s clubs in his three head coaching stops, including at Southern Indiana and Wisconsin-Milwaukee, have produced winning records in all 19 seasons.

His greatest success came at Tennessee, with the Vols going 145-61 and reaching the NCAA Tournament in each of his six seasons. Pearl also garnered national attention there by painting his upper body in orange for a game featuring the nationally prominent women’s basketball team.

His father, Bernie, a retiree living in Florida, says he still gets a kick out of the young Bruce filling in for the ailing Boston College mascot as a graduate assistant to Coach Tom Davis. (Pearl would follow Davis to Stanford and Iowa as an assistant coach.)

“I got to be near the cheerleaders!” Bernie recalled Bruce as saying.

Benedict says Pearl’s embrace of university life is “fairly unique” among coaches with whom he has worked.

One familiar face at Auburn will be Steven Pearl, at 26 the eldest of the coach’s four children, who will join dad on the Tigers’ staff. He also played guard for his father at Tennessee and on the Maccabiah team that captured gold.

“He was a tough coach on me,” Steven said. “I’m expecting that to be even more difficult now, but I’m excited.”

Steven says the Maccabiah experience “definitely synthesized the bond my dad and I have today.”

Another Maccabiah player, guard Zach Rosen, recalls Pearl’s intensity from the start through the gold medal game, when the Americans defeated Israel in overtime.

The Knoxville tryouts made clear Pearl’s commitment to ensuring “a family experience” for everyone, says Rosen, who now plays professionally for the Israeli team Maccabi Ashdod.

Pearl took the players on his boat and barbecued for them, but bringing them to the synagogue services was even more telling, he says.

“If it’s going to be davening in shul, he’ll be up there doing his thing — he’s in. I really have a lot of respect for him because he was willing to be vulnerable, not afraid to mess up, not afraid to be himself, which is a quality of a strong person,” Rosen said.

Leading synagogue services was for the players’ benefit, Pearl explains.

“I wanted the guys to understand that the trip to Israel wasn’t just about basketball, although we took our basketball really seriously,” he said. “It was about our Jewish heritage. It was about our young Jewish men [having] the chance to go to the homeland, if you will, and experience it — and for me, the same thing — and have a greater appreciation for who she is and what she faces and how we stay connected and protect her.”

At Tennessee, visits to the Czech Republic and to Germany included stops at the Theresienstadt and Dachau concentration camps. Pearl says he might arrange such trips with Auburn.

Basketball and otherwise, the players and their penitent coach are in for a wild and, no doubt, meaningful ride.