Maccabi Tel Aviv in the NBA? It may not be a hoop dream 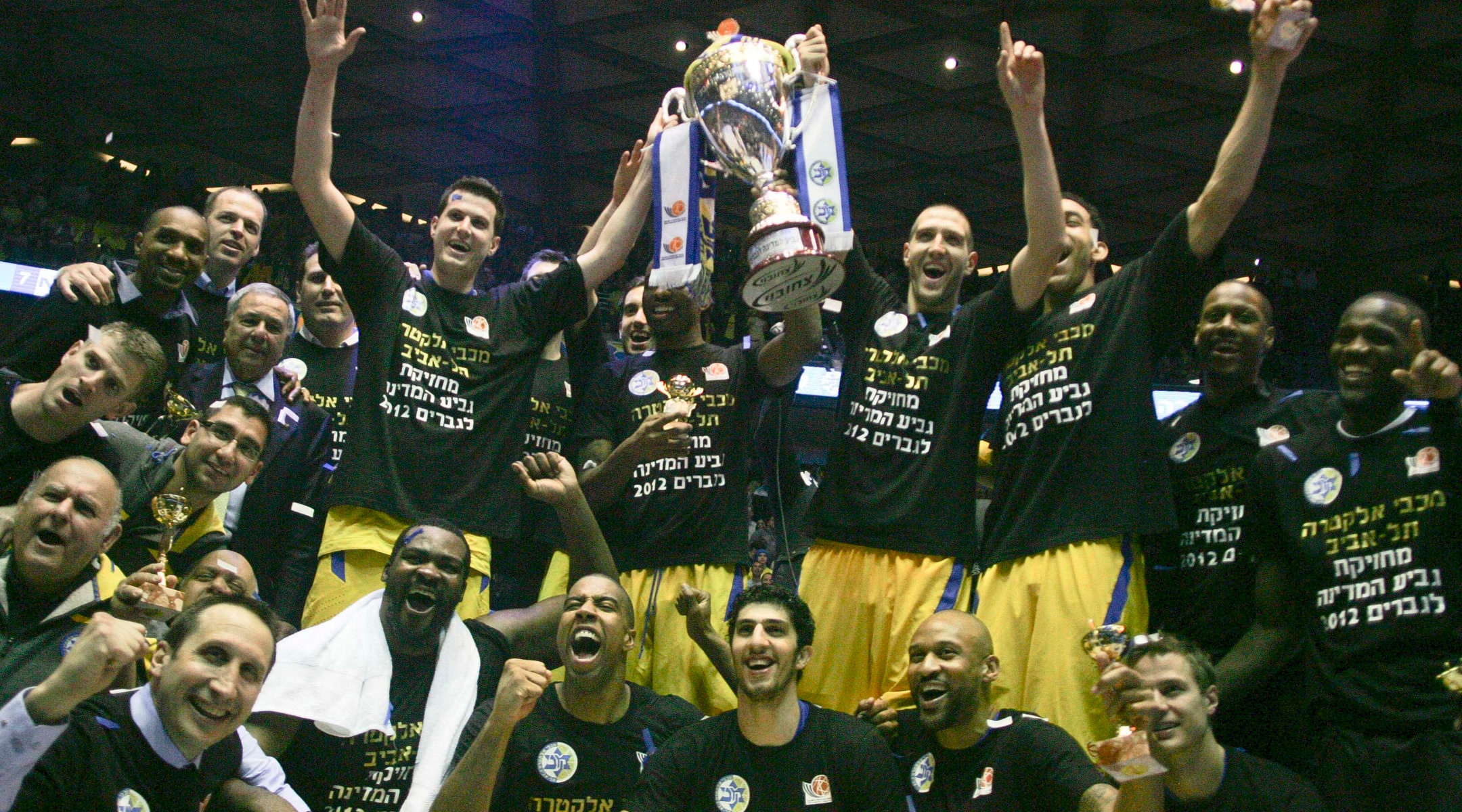 Might the Maccabi Tel Aviv basketball team someday be lifting the NBA championship trophy, as its players and others did here after winning 2012 Israeli Basketball Super League title? (Flash 90)
Advertisement

BALTIMORE (JTA) – Maccabi Tel Aviv reportedly is heading back to the United States this fall for its first exhibition games against NBA teams in five years – but greater developments appear to be in the works for the iconic franchise and Israeli basketball.

For one, how about NBA squads making the trans-Atlantic flight to play regular-season games in Israel, and an Israeli club flying the other way to play in North America?

First, the exhibitions, which have yet to be confirmed: Tel Aviv will meet the Cleveland Cavaliers on Oct. 5 and the Brooklyn Nets two nights later, the Israeli team’s co-chief executive officer Eli Drikes told JTA.

The Israelis last made a U.S. jaunt in 2009 to face the New York Knicks and Los Angeles Clippers. They were North America regulars in the mid- to late 2000s, playing a total of nine games over four preseasons in five years. It  was seen as the high-water mark in North America for the Israeli Basketball Super League’s dynastic club.

But that could change if you ask Tal Brody, a former star player for Tel Aviv.

Brody accompanied team executives in meetings in New York last week with Nets management and recently retired NBA Commissioner David Stern, and said his former squad could be part of a new NBA European Division that Brody predicted would be established within a decade.

Revolutionary as it seems, the NBA has a record of mining global branding opportunities. It has 14 offices overseas, and with the increased number of foreign-born players populating its rosters – 92 at the start of this season, 26 percent of the NBA’s total – the league’s tie-ins abroad would make even more sense.

NBA Commissioner Adam Silver told reporters during All-Star weekend in February that he is “committed to studying” international expansion, but the issue and domestic expansion are “not on the top of my list right now.”

With 50 Israeli championships and five Euroleague titles, Tel Aviv (16-7 heading into Thursday’s regular-season finale) is the revered team in Israel. But others in Israel are catching up, due in part to American ownership and coaching.

Americans are among the minority owners of Maccabi Tel Aviv, and its head coach, David Blatt, is a Bostonian who made aliyah.

The team is expanding its U.S. visibility through a deal reached last week with the MSG Network, which broadcasts Knicks games, to screen Tel Aviv highlights and features on top of agreements in place with Comcast’s Chicago affiliate and the Los Angeles-based Jewish Life Television.

“The Maccabi Tel Aviv brand is a very strong one, so it seems like a great fit,” said Brad Pomerance, senior vice president for news and programming at JLTV, which on Sunday will screen its fourth monthly program on the team.

Such publicity and the renewal of NBA exhibition games will help in attaining another ambitious goal: Tel Aviv’s planned construction of a basketball academy.

In the conversation with JTA, Drikes said the academy would be constructed in the city and house up to 150 promising basketball players, mostly boys. It would open in the fall of 2015 at a cost of $15 million, he said.

Drikes said he hopes his team’s U.S. visit in October will attract Jewish Americans and others “to be financial partners” in the venture while drawing Jewish ballplayers from America to attend the academy.

Tel Aviv and other Israeli teams have youth clubs and departments, but a dormitory-style facility would provide the coordinated approach lacking in Israeli basketball, he said.

“We want the player to get up in the morning, eat a proper breakfast, attend classes, have lunch, get proper rest, train — a real system,” Drikes said.

The proposal has an advocate in Houston Rockets forward Omri Casspi, who played for Tel Aviv’s junior teams before rising to the parent club and then becoming the first Israeli to reach the NBA, arriving in 2009.

“It’s a great idea to have an academy in Israel,” Casspi said Sunday by telephone from Houston. “There are various talents not only in Israel but all over Europe that need to be developed and trained in a way to be successful in basketball and any other sport.

“The bond with the NBA can help Maccabi and the academy by bringing in NBA coaches and player-development coaches to brainstorm different ideas on how to train young players. We are lacking in Israel that part of the game.”

While the Jewish state has very good coaches, Casspi said, he’s found that the role of coaches in North America in a player’s improvement is “so much more intense than what I had in Israel.”

For now, there are the October games. While not confirming the game in the fall, Tad Carper, Cleveland’s senior vice president for communications, recalled his arena being “full of energy and excitement” for a 2006 contest featuring Tel Aviv.

“Certainly, [there was] a great deal of pride and passion from the local Jewish community, with strong attendance and very vocal support for Maccabi. It helped create a very special and fun environment for a preseason game, which is not always the case,” he said.

Former Tel Aviv player Nadav Henefeld played in exhibition games in Los Angeles against the Lakers and the Clippers, in 1990 and 1991, and noted “the large differences that existed then” between the NBA and Israeli teams athletically and organizationally.

Today, he said, the gap is shrinking.

Brody, who remains a hero in the Jewish state for leading Tel Aviv in 1977 to its first European Cup, said witnessing his old team or another Israeli club join the NBA “would complete my dream.”

“If that ever happens – that an Israeli team would be in the NBA – I can rest in peace,” he said.