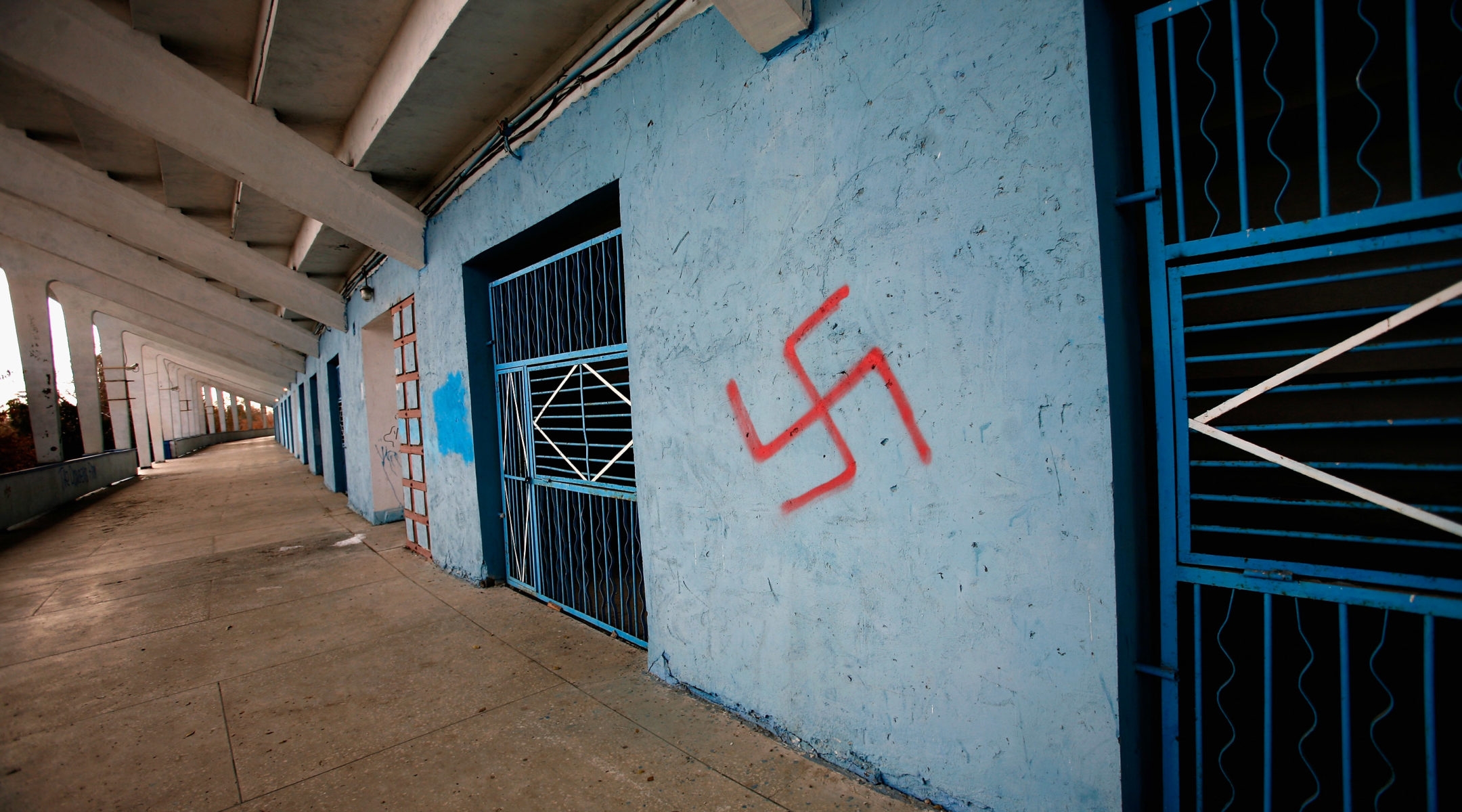 A swastika is seen graffitied on a wall in the Volgograd football stadium on November 16, 2011 in Volgograd, Russia. (Harry Engels/Getty Images)
Advertisement

NEW YORK (JTA) — The Anti-Defamation League’s Global 100 Index of Anti-Semitism is the broadest public opinion survey of attitudes toward Jews ever conducted. It is one of the most important efforts we have undertaken in our history as an organization.

The survey was conducted in more than 100 countries and territories, and 53,100 people were interviewed, representing 4 billion adults around the world.

Our basic findings were sobering: More than one-quarter of the people surveyed (26 percent) harbor anti-Semitic attitudes. The stereotypes receiving the most support worldwide were those questioning the loyalty of Jews and those asserting excessive Jewish power and influence. And, despite decades of efforts to promote Holocaust awareness, only 33 percent of those surveyed are aware of the Holocaust and believe that it is accurately described by historians.

We approach this project with a sense of pride but also humility, knowing that it provides direction rather than definitive answers. The survey will form a baseline for further consideration of anti-Semitism and Holocaust awareness.

Most importantly, the survey will, we hope, begin conversations among governments, scholars, NGOs and others around the world on attitudes toward Jews, and lead to new initiatives to counteract these pernicious attitudes. In this regard, a few comments are in order.

In polling anti-Semitic attitudes, this survey plays an important role in setting the stage for the broader discussion of anti-Semitism in varying societies.

Second, as the organization primarily responsible for dealing with anti-Semitism, ADL frequently encounters comments suggesting we have a vested interest in finding anti-Semitism. With this global survey we do not seek to exaggerate how much anti-Semitism there is in the world; rather, we want to document empirically how things actually are.

Indeed, one of the many fascinating aspects of this poll is the positive side of the story, highlighted by countries where anti-Semitic attitudes are absent or relatively minor. We see that in several Asian countries, like Laos, Vietnam and the Philippines. We see lower numbers in several West European countries such as Sweden and the Netherlands. And, in general, English-speaking countries have significantly better attitudes than the world at large toward Jews.

These positive findings are important. They show how varied attitudes are and suggest the need for further investigation to determine what common factors bring people in some countries to have more positive attitudes toward Jews.

Third, over the years questions have been raised about ADL’s methodology in assessing attitudes through similar polling. ADL polling is based on an index of anti-Semitism developed back in the 1960s by academics from the University of California, Berkeley. They looked at 11 classic stereotypes about Jews — statements about Jewish power and influence, Jewish loyalty and personal traits.

The index we used in the Global 100 is based on these 11 stereotypes. Our analysis rests on the idea that if an individual agrees with six or more of these stereotypes, he or she is deemed to have anti-Semitic attitudes. The strength of this methodology is its high bar: It does not rest on agreeing with any one statement. But agreeing to six or more of these age-old anti-Semitic assertions makes clear one’s biased attitude toward Jews.

Moreover, these 11 statements are not random. These are stereotypes that represent the main anti-Jewish canards through the millennia.

For the ADL, this survey is an important beginning. The conversations that will ensue, in governments and in civil society, will ultimately be the test of the impact of this worldwide poll. We trust it will provide a better understanding of global anti-Semitism and its global reach, and will lead to serious efforts to address this worldwide problem.

(Abraham H. Foxman is national director of the Anti-Defamation League.)