From the Archive: Life in the ‘Shanghai Ghetto’ 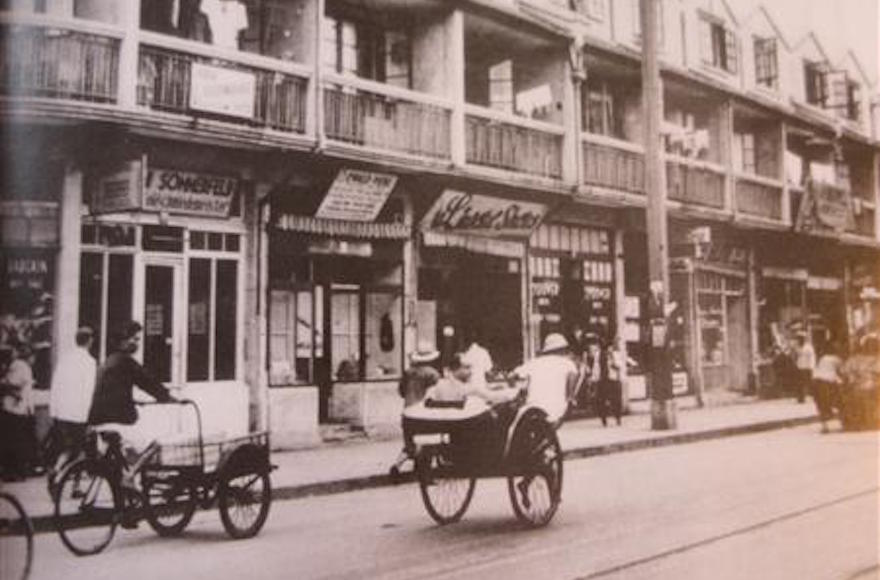 People moving along a street in the Shanghai Jewish Ghetto circa 1943. (Wikimedia Commons)
Advertisement

Last week, JTA reported that the neighborhood in Shanghai that was home to approximately 20,000 Jewish refugees during World War II may be added to the UNESCO Memory of the World Register.

While the Nazi-fleeing refugees who settled in Shanghai certainly fared better than the family and friends they left behind in Europe, life in the so-called “Pearl of the Orient” was nonetheless turbulent.

Things in Shanghai looked bright initially, when the first German Jewish refugees, many of them doctors and dentists, arrived soon after Hitler’s rise to power. The local community was apparently so grateful for the professional skills these refugees brought that JTA headlined a 1934 article  “German Jewish doctors cause China to be grateful to the Nazis.”

In that article, JTA reported that an American journalist working in China said approximately 100 Jewish doctors had set up practices in Shanghai:

… during the short time they have lived in the city they have come to be regarded as “Hitler’s gift to the Far East” by virtue of the medical skill they have contributed to a territory which has long suffered from inadequate medical attention.

In 1937, Japan’s occupation of China, brought both good and bad news for Jews there. On the bad side, its conquest of Shanghai was preceded by months of fighting, and during that period, which JTA described as “undeclared war,” Shanghai rabbis reporting the situation of the Jews was “desperate.”

Jewish quarters of this stricken city were patrolled by a Jewish regiment of the Shanghai volunteer corps protecting property of the inhabitants, extinguishing fires and evacuating Jews from danger zones…

On the plus side, under Japanese occupation, Shanghai became an “open city,” providing a haven for thousands of Jews with nowhere else to go. Many who had difficulty obtaining the initial visas necessary to leave Europe,  were helped by Ho Feng Shan, a Chinese consul general in Vienna from 1938-1939 who was later nicknamed the “Chinese Schindler” and who risked his life to issue visas to thousands of Jews.

Once in Shanghai, Jews attempted to create new, albeit temporary, lives for themselves. A Jewish daily newspaper, the Shanghai Jewish Chronicle, was founded in 1939. That same year, Benjamin Wylie, the director and general manager of the South China Morning Post and Hong Kong Telegraph, expressed high hopes for the future of Jews in China:

But not all the Jews in Shanghai were doing well. A JTA report from 1939 said:

In 1943, at the urging of Germany, the Japanese forced Jews into a small section of the Hongkou District. The area, known as the “Shanghai Ghetto,” was overcrowded and unsanitary, although conditions were not dramatically better in the rest of the city. Diseases such as typhus spread and starvation was rampant for years. Half of the Jewish population survived on donations from charity or other private funds, JTA reported in 1944.

In the months following Japan’s defeat in 1945, thousands of the Shanghai Jews left. Some returned to Germany and Austria to reclaim property, while others went to Palestine, the United States, Australia and various countries in South America.

Those still in China by late 1948 faced a new problem: the Chinese Revolution.

On Dec. 22, 1948, JTA reported that Nationalist soldiers had “looted homes” of Shanghai Jews:

The fear that a pogrom will occur in Shanghai in the interval following the Chinese Nationalists’ withdrawal and the restoration of order by the pursuing armed forces of the Chinese Communists is growing among the Jewish refugees here. The transition period is said to hold very dangerous possibilities for Jewish and other displaced persons in the city.

Through the efforts of various Jewish relief organizations, most of the Jewish refugees were able to leave the chaos. Several Israel-bound groups virtually circumnavigated the world to get there: sailing to San Francisco, riding in a train across the United States (the trains were “guarded” so that they would not try to get off and illegally stay in the country), then boarding another ship for Italy and then, from there, a last ship to Israel.

In 2006, when 108 former Shanghai residents returned to the city for what they called a “Rickshaw Reunion,” Rene Willdorff, the 78-year-old organizer, told JTA of his experiences after arriving from Berlin in 1939:

“My father died of an illness in 1942, so my mother and I lived in near-starvation conditions.”

Even so, said Willdorff, “the Chinese are very nice and gentle people, and they never bothered us. They didn’t care that we were Westerners or Jewish. They left us alone. To a large extent, so did the Japanese, who occupied Shanghai and also had respect for the Jews when we were living in their midst.”