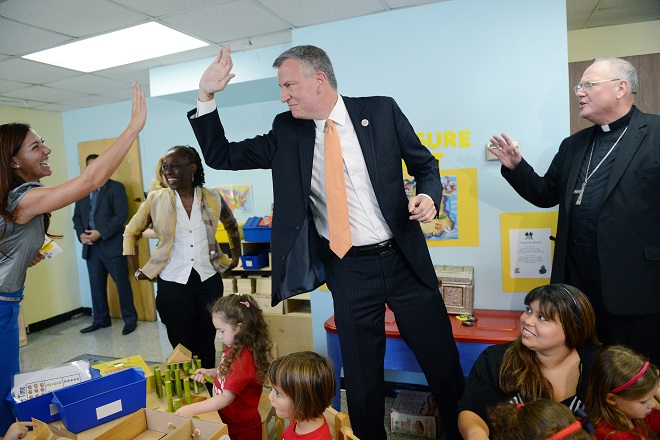 NEW YORK (JTA) — New York City is changing the rules of its universal prekindergarten program to allow for prayer and the scheduling preferences of Orthodox Jews.

The current rules require pre-K programs to provide at least six hours, 20 minutes of uninterrupted secular instruction per day to be eligible for public funding. Orthodox groups have complained that the amount of time does not leave enough for prayer or religious instruction. Additionally, closures for religious holidays made it difficult to reach the threshold of 180 days per year mandated by the city program.

Under the new rules, which will start in September, schools will be subject to a weekly minimum of 31 hours, 40 minutes of secular program instruction rather than a daily minimum. Also, sessions may be held on weekends or federal holidays, which will allow Jewish religious programs to make up for missed holiday days.

The new rules also allow the scheduling of a short break in the middle of the day for “non-program activities” — i.e. prayer — as long as students are able to opt out and instead participate in an alternate activity.

“To be truly successful, Pre-k for All must reach all communities and reflect the incredible diversity of our city,” Deputy Mayor Richard Buery Jr. wrote in a Feb. 18 letter to pre-K providers. “We have been working hard to find further ways to make the program even more inclusive.”

The new rules were a result of a compromise by Mayor Bill de Blasio’s administration that is intended to increase participation by Orthodox Jewish and other private schools in the initiative, according to The New York Times.

However, the Orthodox Union expressed disappointment, saying the changes are largely cosmetic. Too many hours of secular instruction are required — more than the state-mandated five-hour day — to allow for meaningful religious instruction, according to the O.U., which also wants more half-day slots.

“Practically, these changes would force four-year-olds into an almost unending school attendance that would include Sundays and Federal holidays,” Maury Litwack, O.U. Advocacy’s director of state political affairs, said in a statement.

“The Mayor’s insistence upon an uninterrupted 6-hour and 20-minute secular instruction day — an hour and twenty minutes longer than that required by New York State — has made it impossible for more than 11 percent of New York’s Jewish day school children to participate in the UPK program,” the O.U. statement said.

De Blasio wants to reach a goal of 70,000 children in full-day pre-K by the fall; currently there are about 53,000 children enrolled. The city’s preliminary 2016 budget sets aside $340 million for the initiative.

City estimates show that 8,000 to 10,000 Orthodox toddlers are eligible to attend prekindergarten, according to Hamodia, the Jewish newspaper that first reported the new guidelines.

Current regulations allow prekindergartens at religious schools to give hiring preference to applicants of the same religion or denomination, and to use religious texts as part of secular lessons, according to the Times.