From The Onion to ‘Daily Show,’ a roundup of Speechgate satire 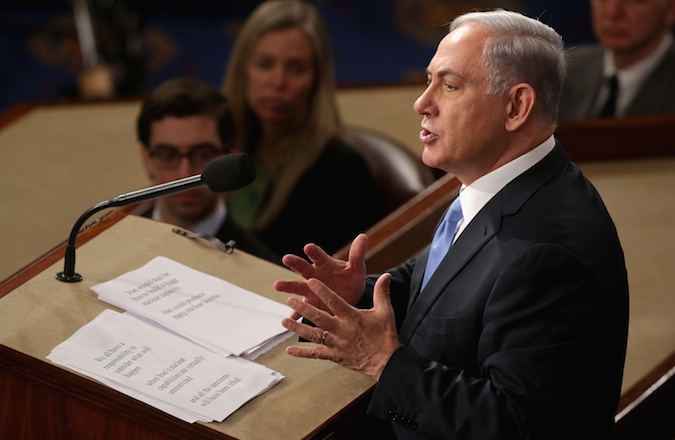 Israeli Prime Minister Benjamin Netanyahu’s address to Congress Tuesday about the proposed Iran nuclear deal was one of the most anticipated and contested speeches of modern times.

All of this also made Speechgate great fodder for satirical news outlets, which, as they are wont to do, poked fun at every angle of the speech and the media circus that surrounded it, offering political insights along the way.

In a segment on The Daily Show about Speechgate, or what he called a “festival of slights,” Jon Stewart reminded viewers that Netanyahu’s speech was not so different from his past addresses to Congress. Netanyahu, who is only the second foreign leader ever to speak to Congress three times, also spoke to a joint session of lawmakers in 1996, just after he was first elected prime minister. (This week Boehner planned to give Netanyahu a bust of Winston Churchill, the other world leader who spoke to Congress three times.)

“If Iran’s that close,” Stewart said about Netanyahu’s reference to Iran’s nuclear bomb capabilities, “why didn’t you bring your urgent warning about Iran going nuclear sooner? Oh wait, you did. Apparently time was also running out 19 years ago.”

The perennial satirists at The Onion focused on a different tension underlying Speechgate: Netanyahu’s strong alignment with the U.S. Republican party. In a piece titled “Netanyahu Doubles Down Against Obama With PowerPoint On Perils Of Affordable Care Act,” the Onion imagines Netanyahu as a politician with a purely Republican view on a purely American topic.

“Why should the government be making health care decisions for us?” the fake Netanyahu asks after calling the ACA an “unconstitutional” overhaul.

They didn’t stop there: A second Onion piece questioned whether Netanyahu has a sincere relationship with President Obama or is just using him for the “economic aid” and “weapons” that the U.S. annually sends to Israel.

Andy Borowitz, of the New Yorker’s “Borowitz Report” blog, took the Obama-Boehner-Netanyahu feud a step further. In his piece “Boehner Calls Netanyahu Closest Ally In Fight Against Obama,” Borowitz put some of Bibi’s words into the House speaker’s mouth.

“Even as the President threatens us with provocative acts, Prime Minister Netanyahu’s support for us has been unwavering,” Boehner says in Borowitz’s piece, echoing rhetoric Netanyahu repeated in his speeches at the AIPAC conference and on Capitol Hill. Of course, Borowitz substitutes Obama for Middle Eastern aggressors, Netanyahu for Obama and Boehner for Netanyahu.