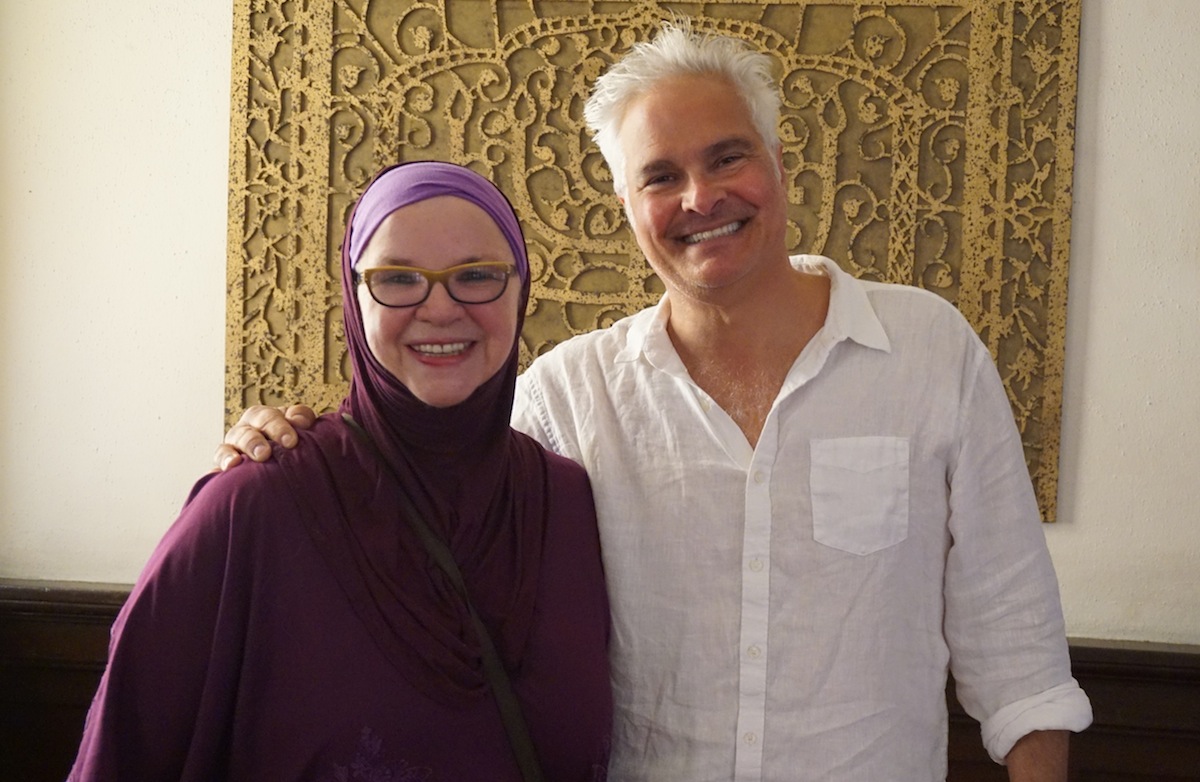 Craig Taubman with Normalika Chishti, a member of the Women's Mosque of America. (Anthony Weiss)
Advertisement

LOS ANGELES (JTA) — On the first floor of the Pico Union Project, members of the Women’s Mosque of America are preparing the historic sanctuary for prayers, spreading long bolts of cloth on the floor, hanging a banner from the organ loft and placing an open copy of the Koran in the just-vacated Holy Ark.

Outside, news crews — including one from an Italian television station — have gathered to document this gathering of the mosque, reportedly the first women’s mosque in America and already the subject of international headlines. Across the street, police officers monitor the situation, just in case.

On the second floor, with the Torah just taken from the ark leaned against a wall nearby, Craig Taubman ruefully considers the flurry of activity.

“It’s just people praying,” he says with exasperation. “Why is this such a big deal?” 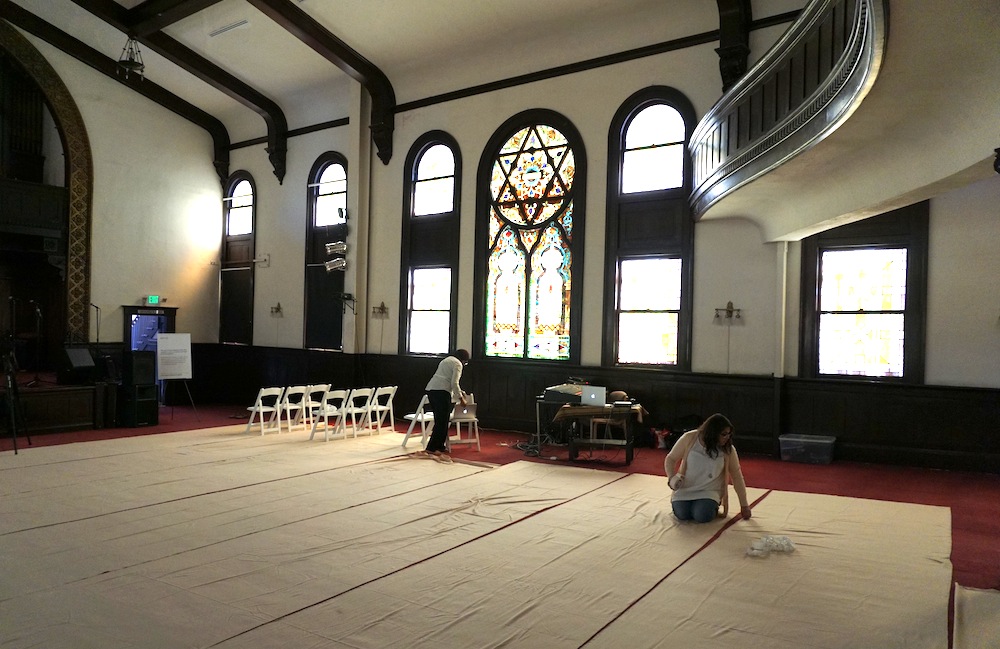 Members of the Women’s Mosque of America preparing the sanctuary at the Pico Union Project for an afternoon prayer service. (Anthony Weiss)

For Taubman, the building’s owner and the founder of the nonprofit Pico Union Project, it seems perfectly natural that the oldest synagogue building in Los Angeles should play host to five prayer groups — the mosque, a Korean church, an African-American church, a new branch of an existing church and a Catholic ministry — as well as occasional Jewish Sabbath services.

Uniting the world’s oft-quarreling religions under one roof is only one part of Taubman’s vision for the Pico Union Project, which is housed in a building erected in 1909 by Sinai Temple, the first Conservative synagogue in Los Angeles. Taubman also wants the space to function as a performance venue, a community space and an advocate for the surrounding Pico Union neighborhood, a largely poor and Hispanic area on the edge of downtown that teeters on the brink of gentrification.

Taubman’s grand sense of possibility fits with the rest of his personality, which tends toward the unrestrained. Topped by a shock of white hair, Taubman, 56, is an outgoing, irrepressible fount of ideas, words and wisecracks.

A former composer of commercial jingles, and songwriter and performer for Disney, Taubman is known in the Jewish world for helping to launch the wildly successful Friday Night Live prayer service at Sinai Temple, which is now a pillar of L.A.’s wealthy west side Jewish community. The service regularly drew hundreds of young Jews every month for more than a decade. 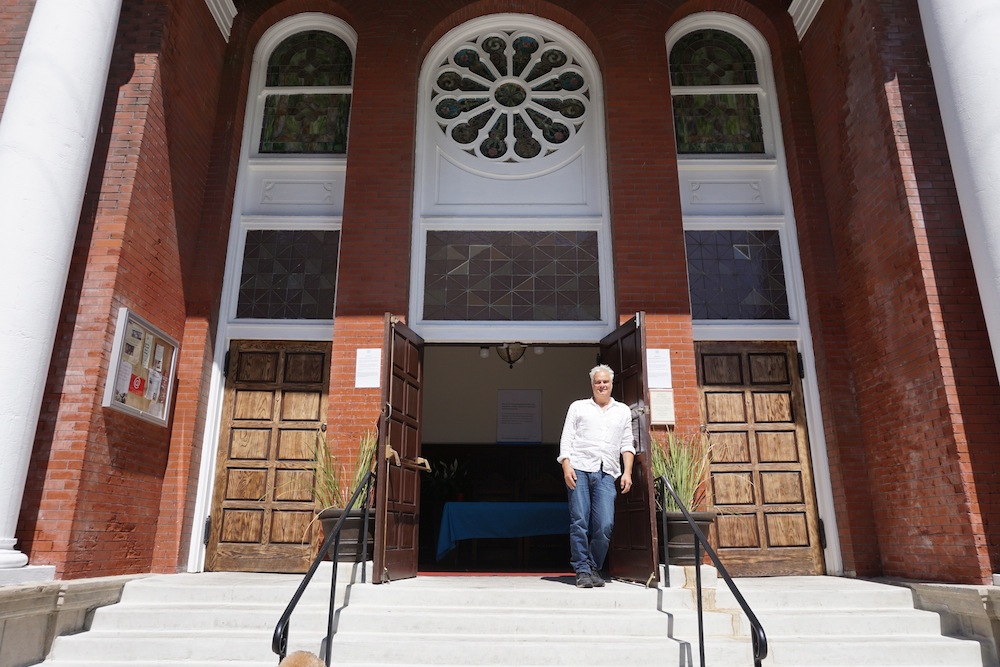 Craig Taubman has opened the Pico Union Project in a historic synagogue building in downtown Los Angeles as a home for cultural, religious, and community events. (Anthony Weiss)

Taubman was introduced to the building by his longtime friend Stephen Sass in 2012. The Welsh Presbyterian church that had occupied the building for 88 years was by then virtually defunct, and the church’s leaders wanted to sell the building back to the Jewish community. Sass, the president of the Jewish Historical Society of Southern California, wanted to preserve the building, but he and the all-volunteer society had their hands full nursing the derelict Breed Street Shul back to life. Then he thought of Taubman.

“He has energy and drive, and he is passionate about things he gets involved with,” Sass said. “Once Craig came inside and I saw his eyes light up, it just seemed like a natural shidduch.”

The Pico Union Project is among a number of historic American synagogue buildings that have been repurposed by Jewish institutions. Some, such as the Vilna Shul in Boston and the 6th and I Historic Synagogue in Washington, include regular Jewish prayer services. Others, like the Eldridge Street Museum in New York City and the Lloyd Street Synagogue in Baltimore, function primarily as museums of Jewish and neighborhood history.

But none share the Pico Union Project’s emphasis on multiculturalism. Perhaps ironically, of all the religious groups he has invited into the space, Taubman has had the most difficulty in establishing a permanent Jewish presence. Jewish-themed concerts and theater pieces are held regularly, and Taubman has organized occasional Jewish prayer services, but no regular Jewish prayer community has taken root, even though the Jewish population in the downtown area has been growing in recent years.

“The indigenous Jewish community, they don’t want it yet,” Taubman said. “Not enough to come and build it.”

Still, Taubman argues that bringing diverse communities together is a profoundly Jewish endeavor — an objective that has resonated with the other religious groups involved in the project.

“What’s happening at Pico Union, the ways we connect, the way Craig brings us together, really is representative of Los Angeles,” said Rev. Najuma Smith-Pollard, leader of the Words of Encouragement Christian Church. “For me as a Christian, Christ love is all about the love of God, is all about loving your neighbor as yourself.”

Taubman has worked to put that mission into practice. He has brought trash cans for the neighborhood, helped plant new trees and hosted community resource fairs. He proudly points out that his building hasn’t been tagged with graffiti in two years.

But though local real estate prices are rising rapidly, the neighborhood remains impoverished and occasionally violent. Omar Perich, head of Victory Outreach Downtown LA, a ministry focused on gang members and recovering addicts that is housed at the Pico Union Project, said that gunfire erupted on Sunday night as his congregation was leaving the building, although nobody was hurt.

And on a recent afternoon, Taubman stepped outside to see an inebriated man slumped on a bench. Taubman brought the man a jug of cider, but he later confessed, “I don’t know what to do about it. I know, love thy neighbor, but … I’m not comfortable with it.”

Still, at a recent concert by the Israeli world music group Yemen Blues, Taubman watched silently and beamed as the group played and the audience danced in the aisles.