From the Archive: 1920s Vilna mommy wars and other Mother’s Day tales 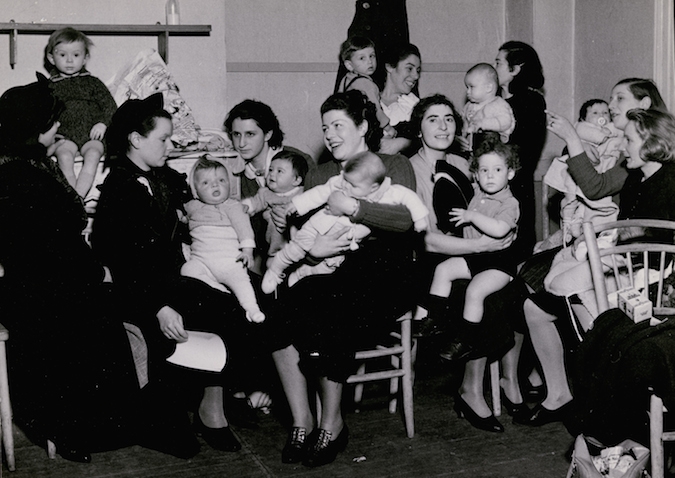 Mother’s Day is this Sunday, and Jewish moms, while celebrated, are often the brunt of jokes based on the old stereotypes of the overbearing, overfeeding and guilt-tripping matriarch.

A peek into JTA’s archives, however, reveals a wide diversity of Jewish mothers in the news from 1923 on, in news, human-interest and trend stories ranging from bizarre to tragic.

Here’s a quick overview of some of the more intriguing mom stories we’ve published over the years, organized according to theme.

The headline from this 1923 story says it all: “Two-headed child born to Jewish mother.”

2. When truth is stranger than fiction

In 1918 Vilna, a childless married woman and her pregnant-out-of-wedlock sister secretly agree to have the unmarried sister use the married one’s name when she gives birth at a hospital and then hand over the infant to her sister to raise as her own. But then:

After six years, the married sister became a widow. The other, having in the meantime been married to a wealthy man, revealed her secret to her husband, her maternal feelings having been awakened, she decided to reclaim her child. Her sister, the widow, refused to return the child, because she cared for it and loved it.

The two sought a rabbi’s help to resolve the dispute. See if you agree with his decision.

The phenomenon in recent decades of undocumented immigrants from Latin America bearing children in the United States in order to secure citizenship inspired the term “anchor baby.” But in 1924, a Polish Jewish mom arrested in northern Montana for entering the U.S. across the Canadian border without a visa, avoided being deported to Poland thanks to the Canadian birth, and thus citizenship, of her 1-year-old child.

While children could help mothers secure visa and citizenship, immigration could separate mother and child. In this 1934 piece, one of several articles from the 1930s and ‘40s about mothers being reunited with children in other countries, Polish Jew Celina Roszga was finally reunited with her son, who had immigrated to the United States with his grandmother, thanks to the intercession of President Franklin Roosevelt, who responded to a plea from the Warsaw rabbinate and granted her a visa to enter the United States.

In some cases, the mom was the immigrant seeking to bring her child from the Old Country — and the challenge was not securing an entry visa, but an exit visa. In 1955, JTA reported on 9-year-old Rosa Rotenstein, who had been left in the Soviet Union with a grandmother, and finally was reunited with her mother in Israel after eight years of the parents petitioning to Soviet officials to let her go.

Fifteen years later, JTA profiled Lea Slovin, a Soviet emigre in Israel who was representing 117 Russian Israeli mothers who like her were separated from their children because of Soviet-imposed restrictions:

Mrs. Slovin, her husband Baruch, and two of their three children immigrated to Israel from Riga, Latvia, last year. Mrs. Slovin’s oldest, Noemi, who is now 20, was denied permission to leave. “They never give any reasons,” Mrs. Slovin said. “I have not had a letter from her in seven months, although I have spoken to her on the telephone a few times. She cries. In her last letter she wrote, ‘Mommy, I dream of you every night and when I wake up in the mornings I cry to be with you.’”

5. Divorce, custody and the Nuremberg laws

The Nazis’ imposition of racial laws set off a wave of complicated custody disputes in intermarried Jewish-Aryan families. In one such case in 1936, a Jewish mom was awarded custody of her 11-year-old after the Aryan father died, over the objections of the German woman who brought up the child. (It’s unclear from the article whether the German was a relative or a nanny.) JTA noted that in her plea, “the “Aryan” woman had asked to be permitted to keep the child on the ground that if it were to be declared Jewish it would only suffer under the Nuremberg anti-Jewish laws.”

In another case, a divorced Jewish mom whose Aryan ex-husband had custody of the child was forbidden from bringing the child to her home:

In divorce cases where the “Aryan” father is awarded custody of the child, the Jewish mother may not see her child in her home “even if she promises not to bring the child together with other Jewish relatives,” the decision states.

Of course the Nuremberg laws were only the beginning in Hitler’s much larger effort to exterminate the Jews, an endeavor in which countless mothers were separated from their children. In 1942, JTA reported on a rescue effort for 1,200 French Jewish children whose mothers had been deported. As one official explained: “Thousands of Jewish mothers in Paris, given the choice of keeping their children with them or leaving them behind, preferred to part from their infants rather than take them along to unknown destinations.”

Not only were mothers and children separated, but they were sometimes targeted for abuse, as in this horrifying 1943 story of a Nazi officer who turned a Jewish woman and her toddler into “a statue of ice” by forcing her to stand holding her child in her arms in the freezing wind as “icy water was poured over her.”

7. American Jewish mothering trends
In 1959, JTA reported on a New York survey indicating that “few Jewish children are born out of wedlock,” a problem for Jewish couples seeking to adopt a Jewish baby. (At the time New York law required that a child be placed only with couples of the same religion as the birth parent.)

Twenty-five years later, however, another article reported on the opposite trend: the growing number of single professional Jewish women choosing to have babies outside of marriage.

Meanwhile, the increasing number of Jewish mothers in the work force — and with little free time for volunteering between the demands of career and family — began posing problems for the women’s organization Hadassah, which scrambled to adapt by scheduling more evening and weekend meetings.

And in an example of “the more things change, the more they stay the same,” a 1991 article addressed the obstacles faced by women rabbis with children — challenges that, almost a quarter-century later will likely resonate not just for female clergy but all working mothers.