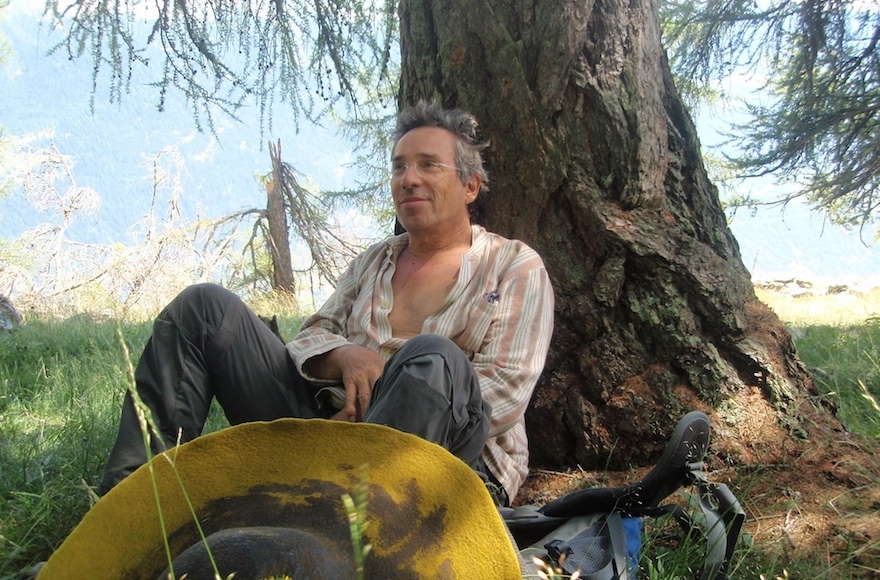 (JTA) — Even at his remote sheep pasture in the Austrian countryside, Hans Breuer was too disturbed by the plight of the Syrian refugees streaming into his country to go about his daily routine.

Especially troubling to Breuer, a 61-year-old Jewish shepherd and singer of Yiddish songs, were the overcrowded conditions at Traiskirchen — a government-run refugee camp near Vienna that was featured on the local news last month because its 4,500 residents were double the intended capacity.

“I was sick of this crime, I asked my wife whether we should do something, and that’s how it began,” Breuer told JTA last week, recalling his recent experiences assisting dozens of refugees.

In August, Breuer showed up at Traiskirchen with peaches, water and meat from a sheep he had slaughtered for the refugees — one among his flock of 200 that he keeps near his trailer home 15 miles from Vienna, where he lives with his wife, Mingo Georgi, and two of his five children. The Traiskirchen visit, he said, motivated him to help out in other ways, including assisting migrants in their trek from Hungary to Austria by transporting them closer to the border.

During one of his trips this month with migrants, Breuer was filmed by a fellow activist driving five passengers who said they were Syrian Palestinians while singing a Yiddish song: “Oyfn Veg Shteyt a Boym” (“A tree stands off a road”) by Itsik Manger. Breuer, an athletic-looking man with a thin beard, delivered the lyrics in a moving rendition. The giggling migrants joined in for a bit of the refrain.

The video, uploaded to YouTube and disseminated on social networks, went viral. It’s been watched tens of thousands of times and also appearedin the online edition of The Jerusalem Post, where readers offered praise for Breuer’s “contribution to coexistence,” as one user phrased it in the comment section — as well as condemnations for his assistance to “the Muslim invasion of Europe,” as another put it.

Breuer said he was surprised to discover that so many people found the situation unusual and politically charged.

“My connection to refugees is as strong as it is instinctive,” he said. “It is a political issue for me, but it’s also a question of human rights and humanity.”

Breuer’s father, Georg — a middle-class Austrian Jew who was not observant but belonged to the Reform Jewish milieu of Vienna — was himself a refugee. In 1938 he fled Austria for Italy and, from there, to Britain, where he became a communist and a journalist. 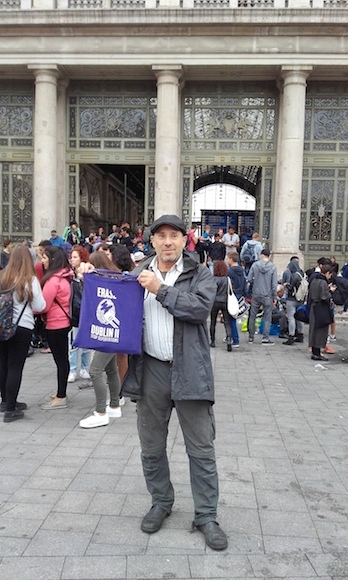 Hans Breuer at a train station in Budapest holding a sign calling for an end to the deportation of migrants, August 2015. (Courtesy of Hans Breuer)

Rosa, Hans Breuer’s non-Jewish Austrian mother, also a journalist and a communist, was tortured by the Gestapo during the Nazi period — she tried to commit suicide by jumping out of the fourth floor of a hospital building where the Gestapo imprisoned her. Her father was sent to a concentration camp for dissidents.

“They weren’t like those couples who survived the Holocaust and never spoke about it,” said Breuer of his parents, who died several years ago. “On the contrary: They told and told and it dominated my youth. Their refugee experience wasn’t exactly a trauma for me, but it wasn’t too far from that.”

The refugees’ tired faces, their stories of escape from ISIS terrorists and the alienation they encountered in Europe made him think of his own parents’ ordeal, Breuer said.

On one visit to Traiskirchen, Breuer brought along his youngest children, 3 1/2-year-old Louis and 1 1/2-year-old Rosa (Breuer’s children from his second marriage.) As a token of gratitude, some of the refugees gave the children teddy bears, which they hurled over Traiskirchen’s wire fence.

“When they saw how happy our kids were with the new toys, they threw over a bigger teddy, taller than our kids,” Breuer recalled.

It was “one of the most emotional moments” he had in his interactions with the migrants, he said.

Breuer said he knows firsthand what it is to be an outsider. At school, Breuer said he was ostracized for what he calls his “mild obsession” with the Holocaust.

“I was the only one talking about it, thinking about it. They thought I was pretty weird,” he recalled.

As he matured, Breuer said he began despising certain aspects of Austrian society – and especially its lack of reflection and soul searching in the postwar era. The Holocaust, he said, wasn’t taught properly at his school. And the Austrian authorities’ claim, backed up by popular sentiment, that Austria was a victim of Nazism instead of an accomplice was “especially disgusting,” Breuer said.

Instead, Breuer — the subject of “Schlepping Through the Alps,” a 2005 biography authored by the American writer and journalist Sam Apple — became a musician and sheep breeder, often living in communities of like-minded individuals. 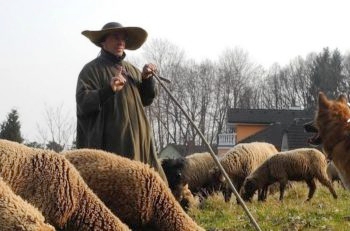 Breuer and his sheep, March 2015. (Courtesy of Hans Breuer)

Breuer’s father did not teach him Yiddish. As a Viennese assimilated Jew, Georg Breuer belonged to a social class for whom the affiliation with Yiddish-speaking refugees from Eastern Europe was an embarrassment, said Breuer. He said he discovered Yiddish music 35 years ago while playing and singing world music with various ensembles.

“This music, written by refugees for other refugees like themselves, somehow makes me think of home,” Breuer said. “It is also my hope for the refugees I help: That they find a home.”