9 more Jewish symbols UNESCO should claim for other religions 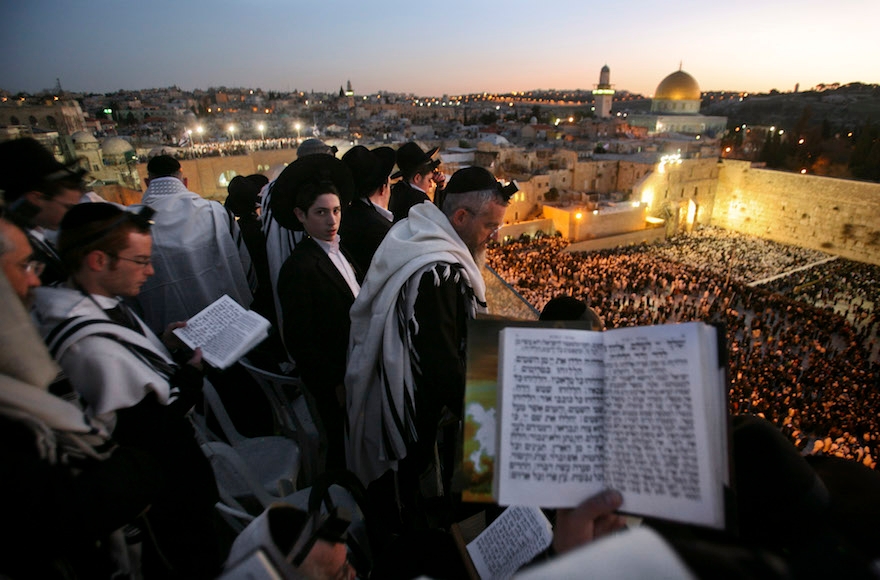 Haredi Orthodox Jewish men participating in the "Blessing of the Sun" prayer at the Western Wall in Jerusalem, April 8, 2009. (Dan Balilty/AP Images)
Advertisement

On Monday, news broke that UNESCO, the United Nations cultural agency, is to vote on a Palestinian-backed proposal declaring the Western Wall a Muslim site.

The last remnant of the long-destroyed Jewish Temple, the Western Wall is hands-down Judaism’s holiest site and arguably the most famous site in Israel. It’s adjacent to the Temple Mount, known to Muslims as the Noble Sanctuary — once the site of the Temple and now of al-Aqsa Mosque, the third-holiest site in Islam (after Mecca and Medina).

Jews are barred from praying on the mount by both secular and religious Israeli decree. But rumors among Palestinians that Israel was plotting to change this “status quo” sparked the current surge of violence in the country, despite the assurances of Israeli leaders that nothing was changing.

While Muslim and Arab leaders have long claimed Jews have no religious claim to the Temple Mount — even questioning the historic existence of the Temple — this is the first time they have gone so far as to claim the Western Wall itself.

But why stop with the Western Wall? Here are some other Jewish things UNESCO might want to consider claiming for other religions.

1. Hanukkah: It’s coming up, so if UNESCO acts quickly, Muslims could be enjoying eight nights of candle-lighting, latke-eating and gift-giving in time in no time. Maybe it can’t compete with Christmas, but it’s definitely more fun than Ramadan.

2. The Bible: Christians might enjoy this wealth of texts  — oh wait, they already do and call it the Old Testament!

3. Challah: These braided loaves are beautiful and delicious, but they’re also kind of fattening. We’ll let the Christians have them, so long as they promise to pronounce the guttural “ch” sound.

4. Bernie Sanders: OK, we were kind of excited about the possibility of him being the first Jewish president of the United States (even if no one thinks he will actually be elected). But Buddhists have never had a president either, and Sanders’ Vermont is chock-full of Buddhist-themed yoga retreats, so they can have him.

5. Ruth Bader Ginsburg: How many Supreme Court justices do the Jewish people really need? Let a Hindu have a chance to try on those nifty black robes and interpret the laws of the land.

6. Kippahs: These head coverings, also known as yarmulkes, make a great crocheting project, but they can be annoying the way they’re always falling off unless attached with bobby pins. Since the pope already wears a hat that looks like one, we hereby donate the kippah to the Catholics.

7. Yiddish: It’s expressive and colorful, but let’s face it: Outside the haredi Orthodox community, most Jews know only a handful of words in this linguistic blend of German and Hebrew. So, we won’t kvetch too much if UNESCO wants to donate it to the Protestants of the world.

8. The Star of David: It’s symmetrical and looks nice on a necklace or Israeli flag, but we’ll let the Taoists have it if they’re willing to give us the Yin-and-Yang symbol in exchange.

9. Natalie Portman: She’s gorgeous, talented and smart, and was born in Israel (which many people believe is really Palestine). Like many Presbyterians (and people of numerous other faiths),  she is critical of Prime Minister Benjamin Netanyahu even if she is overall pro-Israel. Since she’s currently living in France, which isn’t the best place in the world to be Jewish right now, UNESCO can re-assign her to any faith of its choosing.