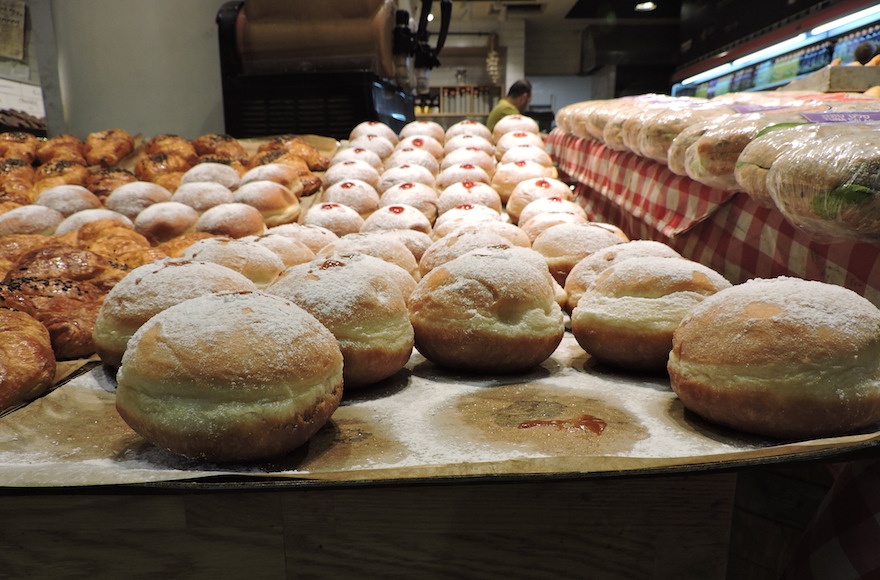 Sufganiyot on display in Jerusalem's Central Bus Station. The jelly donut began appearing in bakeries around Israel more than a month before Hanukkah. (Ben Sales)
Advertisement

TEL AVIV (JTA) — After more than three weeks of feasts, prayers and days off from work and school, Israel’s busy holiday season — from Rosh Hashanah through Simchat Torah — finally ended earlier this month.

But, it turns out, another holiday was just beginning: Hanukkah.

To be sure, Hanukkah doesn’t begin this year until the evening of Dec. 6. But just as in the United States, when the end of Halloween now means the beginning of the Christmas season (remember when that day used to be Thanksgiving?),  in Israel, the conclusion of the High Holidays — and sometimes, even during the High Holidays — means the start of the Hanukkah season.

Of course, in Israel, Hanukkah isn’t the Jewish Christmas. It’s a relatively minor holiday, celebrating an ancient Jewish kingdom; adults still have to work. Hanukkah gifts aren’t a thing, either, so there are no crowds mobbing the mall for last-minute shopping.

But one thing that’s huge in Israel during Hanukkah is sufganiyot, the oily jelly doughnuts that are traditionally eaten here rather than latkes, the holiday favorite among Jewish-Americans. Savvy businesses have noted Israelis’ love of the pastries and are marketing them to the hungry masses months in advance.

In September, right after Rosh Hashanah ended, the Israeli bakery chain Roladin rolled out its first batches of sufganiyot.

READ: Hanukkah in Israel: Sufganiyot on the streets, burning lights and family fun

Roladin is famous in Israel for getting creative with its sufganiyot, including variations with syringes filled with jelly (or another gooey treat), ensuring each bite has that perfect ratio of fried dough and filling. Last week, a branch of the bakery in Tel Aviv showed off a variety of flavors — the traditional jelly-filled sat on display trays alongside dulce de leche; meanwhile, an employee carried a tray from the kitchen filled with chocolate-sprinkled versions.

The bakery starts sufganiyot so early, a spokeswoman said, simply because people like them — in fact, they’ve been getting an early jump on the doughnuts for 26 years.

“People come in for it, for sure,” she said. “We have the sufganiyot with the most innovative flavors. The inspiration comes from French desserts.”

Others have followed Roladin’s lead. A sweet shop in Jerusalem’s Machane Yehuda market plans to start selling the doughnuts this week. And a bakery in the Jerusalem Central Bus Station sold its first sufganiyot on Thursday, presented in layered rows on its front counter.

“In the United States, they sell jelly doughnuts all year round,” said Ramon Mendesona, a ceramics artist with a stall in Tel Aviv’s Nachalat Binyamin craft market. “Why should we save them just for Hanukkah?”

After all, Mendesona and a couple other artists in the craft market sell menorahs and for them, Hanukkah season never ends. Tourists buy them year-round. Israelis, they said, begin buying menorahs a month or so before the holiday.

Fortunately, for Israelis with sweet tooths, the selling of sufganiyot is in full swing. One fan of the early doughnut push is Elie Klein, a public relations professional who from 2010 to 2012 ate an average of 100 sufganiyot a year. Like a marathon runner, Klein got friends to donate money for each sufganiyah he consumed — and ended up raising $40,000 for various charities.

While Klein has had his fill of doughnuts for a while, he said he still loves seeing them in bakery windows.

“The fact we’ve turned it into something so huge, this seasonal food, it’s pretty amazing,” he told JTA.