Paris attacks leave French-Israelis reeling, relieved to be out 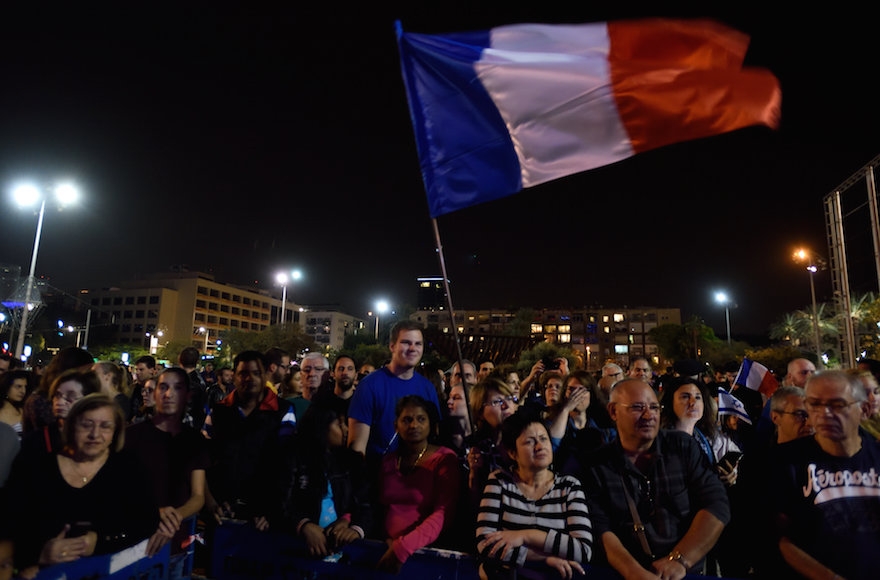 Hundreds of Israelis attending a rally at Rabin square in Tel Aviv, in solidarity with Paris, Nov. 14, 2015. (Gili Yaari/Flash90)
Advertisement

TEL AVIV (JTA) — It was 2 a.m. when Illana Attali’s friend’s screams woke her. Her friend had just heard about the series of coordinated terror attacks on Paris — a wave of violence that would kill at least 129 people on Friday.

A Paris native who moved to Tel Aviv five years ago, Attali, 31, had been on a desert hike with two friends and had turned off her phone. When she first heard about the attacks, she thought it was just a bad dream. All three friends began sobbing and decided to head back to Tel Aviv.

Attali moved to Israel for a change of scenery, but had considered moving back to France to avoid the difficulties of raising children in a country wracked by terror. Now, still in shock over Friday’s attacks, she isn’t sure which country is more dangerous.

“It’s a schizophrenic state of mind,” said Attali, a doctoral student in sociology. “I love Paris, I love France. It’s my country as much as Israel is my country. But I don’t feel safe in any of them. It’s really hard. It’s scary.”

Some 150,000 French Jews are thought to live in Israel. Many who spoke with JTA said they are hurting for their country of origin, but felt relieved to be far from Paris. After a series previous attacks on the French capital in January — one on a kosher supermarket that left four people dead — many said they were not surprised that terror had struck the city again.

“French immigrants in Israel support Paris and are very sad about the situation, but people are very happy to be here,” said Jonathan Dreymann, who moved to Israel with his wife and two children in August. “It’s one more reason that shows that maybe we took a good decision in making aliyah.”

French immigration to Israel has spiked in recent years. In 2014, some 7,000 Jews moved to Israel from France — more than from any other country.

This year, through September, 6,250 Jews have moved from France to Israel, an 11 percent increase over the same period last year, according to the Jewish Agency for Israel, which facilitates aliyah.

More than 20,000 French Jews have arrived in Israel since 2010, settling mostly in Tel Aviv and Jerusalem, as well as the coastal cities of Netanya and Ashdod. Real estate agencies with French signs now pepper those cities, along with pastry and bread shops offering French specialties.

According to Avi Zana, director-general of Ami, an organization for French immigrants in Israel, French Jews tend to be traditionally observant and to lean right politically.

Following the attack on the kosher supermarket, Hyper Cacher, France deployed nearly 5,000 troops to protect Jewish institutions throughout the country.  French Prime Minister Manuel Valls decried anti-Semitism in a speech to France’s National Assembly, declaring: “When the Jews of France are attacked, France is attacked, the conscience of humanity is attacked.”

There are about 500,000 Jews in France, the majority of them in Paris.

Several French-Israelis told JTA that a rise in anti-Semitic incidents was a motivation for their move. Some said they didn’t want their children attending schools and synagogues under armed guard. Others suggested that France’s large and growing Arab population made them feel less welcome.

Being Jewish in France, the French-Israelis said, has meant feeling different.

“I was never part of a Jewish community, but in a way people reminded me that I was Jewish, in jokes,” said Hanna, a Marseilles native who moved to Tel Aviv three years ago and who did not want her last name published for privacy reasons. “I didn’t want to raise children who were going to say they were Jewish and get jokes.”

Violence is also a fact of life in Israel, which has seen a war and two waves of terror in the past 16 months. But many French immigrants said they felt safer here.

“Here there are also security events, but here there is a security state,” Zana said. “Here you feel at least that the country is doing everything for security. In France, the security was on the sidelines.”

France has already shown signs of a clampdown on terror. This week, President Francois Hollande requested a three-month state of emergency. But Attali said the kind of precautions considered natural in Israel — like guards at malls and metal detectors at bus stations — are unlikely in France, which puts a premium on civil liberties.

“It’s going to be different because France is not Israel.” Attali said. “The culture in France is really supporting privacy and not too much security. If you bring a lot more security, you lose privacy.”

Despite France’s rising anti-Semitism and the recent terror, some French-Israelis say they still feel torn between the two countries. They used the pronoun “we” when talking about France and said they miss Parisian life, and their families who remain there.

Thousands of French-Israelis rallied in solidarity with France in Tel Aviv on Saturday night, waving the country’s tricolor flag and singing its national anthem, “La Marseillaise.” Israeli officials addressed the crowd in French, and Jerusalem lit its Old City walls with the French flag’s blue, white and red colors.

Others, however, felt resentful of the rallies, saying they feel their former country is no longer a bastion of democratic values. Non-Jewish Parisians, they said, would never support Israel like Israel has supported Paris.

“How many times were people killed in Israel?” asked Ivan, 73, a French immigrant who withheld his last name because his children still live in France. “How often did the French talk about it? Never.”