Trump calls for ‘total and complete shutdown’ of Muslims entering US 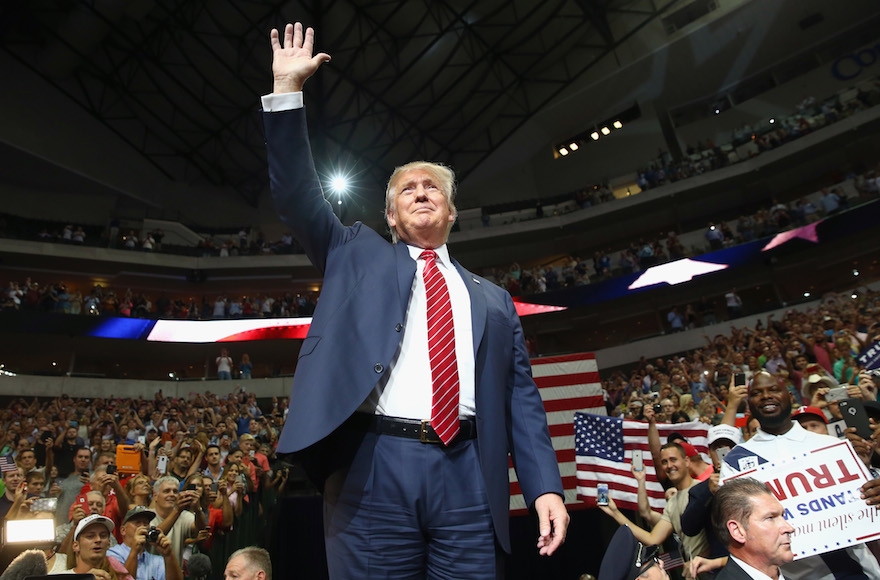 (JTA) — Republican presidential hopeful Donald Trump said all Muslims should be denied entry to the United States for an indefinite period of time.

A statement released by Trump’s campaign Monday said, “Donald Trump is calling for a total and complete shutdown of Muslims entering the United States until our country’s representatives can figure out what is going on,” according to Business Insider.

The New York Times, which also reported the statement, confirmed its authenticity with a campaign spokeswoman.

Trump’s campaign referenced a poll conducted by the Center for Security Policy think tank in June that claimed a “significant” minority of Muslim Americans “embrace supremacist notions that could pose a threat to America’s security and its constitutional form of government.”

“Until we are able to determine and understand this problem and the dangerous threat it poses, our country cannot be the victims of horrendous attacks by people that believe only in Jihad, and have no sense of reason or respect for human life,” the statement said. “If I win the election for President, we are going to Make America Great Again.”

According to The Associated Press, Trump’s campaign manager, Corey Lewandowski, said the proposed ban on Muslims would apply to “everybody,” including Muslim tourists and those seeking immigration visas. He declined to tell the AP whether the ban would also apply to U.S. citizens who travel outside the country or how he suggested Customs and border officials determine a traveler’s religious identity.

Trump, the front-runner among Republican presidential candidates, sparked controversy in November when he suggested the United States should create a database tracking all Muslims in the country. Several Jewish organizations, including the Anti-Defamation League, condemned the idea, noting its resemblance to registries the Nazis created of Jews at the beginning of the Holocaust.

Trump’s remarks came a day after President Barack Obama, in a nationally televised address in which he vowed to destroy the Islamic State, called on moderate Muslims overseas and in the United States to confront extremists among them. In his speech, Obama warned against generalizing about a population he called patriotic, noting the many Muslims who serve in the U.S. armed forces.