Will 2016 be the year of the female Orthodox rabbi? 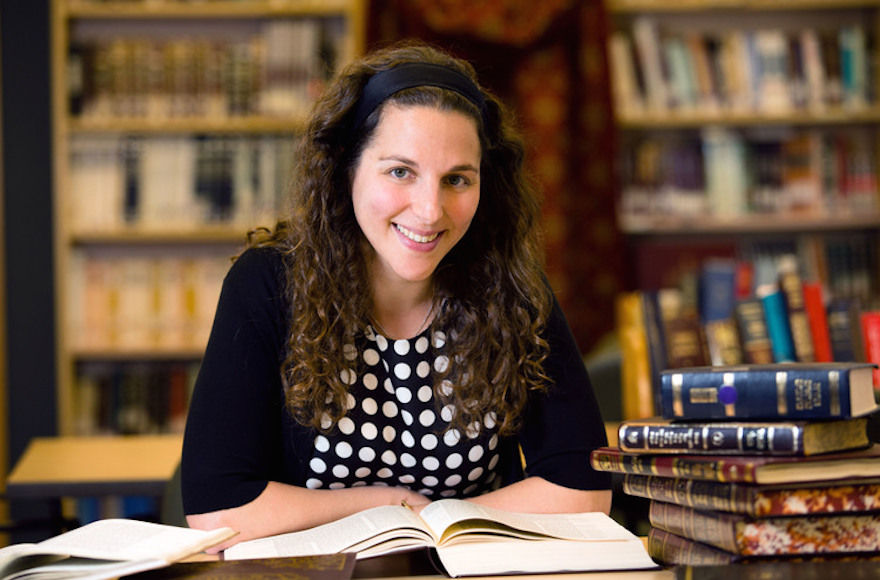 (JTA) – Forget 2015 – that’s so last year. It’s time to think about the future. What will the new year bring on issues of concern to Jews?

Will the wave of violence in Israel become the new normal? 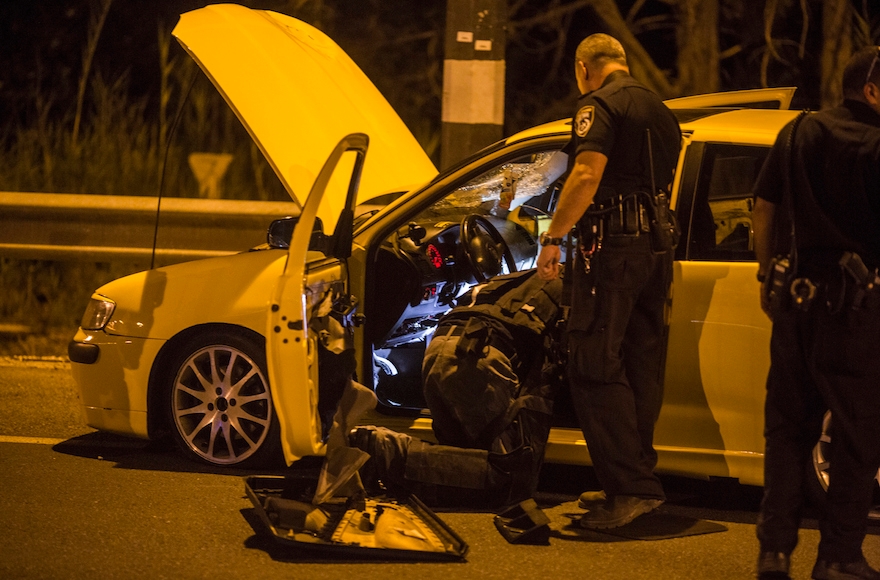 Police at the site of a suspected terror attack by an Arab-Israeli who allegedly drove his car into four Israelis at a Haifa kibbutz, Oct. 11, 2015. (Ilia Yefimovich/Getty Images)

For nearly four months, Israelis have been subjected to a steady stream of Palestinian attacks that so far have killed 27, injured 279 and stoked a climate of tension in Israel not unlike that of the intifada era. A poll in November by the Israel Democracy Institute found that 67 percent of Israelis fear that they or someone close to them will be harmed in the current wave of terrorism.

Unlike previous outbreaks of violence, this one has been characterized mainly by lone-wolf attacks: Palestinian assailants, inspired by terrorist leaders but apparently not guided by them, have perpetrating 99 stabbings, 37 shootings and 22 car rammings since mid-September, according to the Israeli Foreign Ministry.

The mostly spontaneous nature of these attacks and the ubiquity of low-tech weapons like knives and cars have frustrated counterterrorism efforts. Simply put, how do you stop a 16-year-old Palestinian who grabs a kitchen knife and takes to the street with lethal intentions? In most cases, quick-acting armed citizens or police have ended the attacks using their weapons.

Despite ebbs and flows, the attacks have persisted. Israeli officials say they are confident it’s just a matter of time before the attacks fizzle. But without an effective strategy to stop them, it’s also possible these attacks will become the new normal, leading to more casualties and worsening relations between Jews and Arabs. And it’s also conceivable that some mass-casualty attack will spark a harsh Israeli response that is followed by deadlier Palestinian attacks and the eruption of a full-blown intifada.

Will 2016 be the year of the female Orthodox rabbi?

Lila Kagedan is the first woman ordained by Yeshiva Maharat in New York City to say she would be calling herself rabbi. (Courtesy of Yeshivat Maharat)

Since the first ordination of an American woman as Orthodox clergy in 2009, Orthodox women studying to become clergy and the institutions that ordain them have been lightning rods.

Just two months ago, for example, America’s main modern Orthodox rabbinical association, the Rabbinical Council of America, formally voted to ban the hiring of women who carry even a clergy-like title by Orthodox synagogues or schools. The RCA already had condemned the idea of female rabbis twice before. The haredi Orthodox Agudath Israel of America has taken an ever harsher line, declaring that institutions that train women rabbis “reject the basic tenets of our faith.”

But for all the condemnations, Orthodox clergywomen have shied away from direct confrontation with the Orthodox establishment and tread lightly when it came to title.

“We recognize that the path toward female leadership is slow and is an evolution,” Sara Hurwitz, the first American Orthodox female ordainee and the dean of Yeshivat Maharat, a New York City-based yeshiva that ordains Orthodox women clergy, told JTA last year. (Hurwitz goes by the title “rabba,” a feminized version of rabbi.) “We’re not trying to upend halachah [Jewish law]. We’re really trying to work within the halachic system of the Orthodox community.”

But late last month, Lila Kagedan became the first woman ordained by Yeshivat Maharat to announce that she would be calling herself rabbi rather than “rabba” or “maharat.” Kagedan, who said she has been hired by an American Orthodox synagogue but did not identify the institution, is following the model of two women ordained last summer as Orthodox rabbis by the Har’el Beit Midrash in Israel, which describes itself as a “rabbinic studies program for men and women.”

Will this be the year Orthodox clergywomen unabashedly define themselves as rabbis?

The strategy carries potential risks and rewards. The risks? It would galvanize opponents and might make it more difficult for the women to find jobs at mainstream Orthodox institutions. But it could also galvanize supporters, as well as make those who oppose female clergywomen appear out of touch with the realities of a modern Orthodox world increasingly inclined to offer women equal opportunities.

The Iran nuclear deal championed by the Obama administration and achieved last summer will face its first real tests this year.

Iran already is far along the path of dismantling its nuclear infrastructure, according to U.S. officials, with more than a quarter of its centrifuges dismantled, the heavy water reactor at Arak nearly reconfigured to make it impossible to produce a nuclear weapon, and nearly all of the country’s stockpile of low-enriched uranium shipped overseas.

In fact, Iran’s implementation of the agreement’s requirements has taken place faster than expected, meaning that anti-Iran sanctions are likely to be eased in a matter of weeks rather than months.

But many questions remain.

Will Iran use the billions of dollars set to unfreeze to promote terrorism or advance regional unrest? Will Iranian anger over a new U.S. law that curtails visa-free travel for those who have visited Iran, which Tehran has charged violates the nuclear agreement, prompt the Islamic Republic to renege on its commitments to nuclear disassembly?

And will new tensions between Iran and Saudi Arabia — the latter just said it was cutting diplomatic ties with Iran following the torching last week of the Saudi Embassy in Tehran by protesters angry over Saudi Arabia’s execution of a prominent Shiite cleric — erupt into a full-blown crisis America cannot avoid?

Still facing strong domestic headwinds, proponents of the deal in both Washington and Tehran will have to work hard to make sure it doesn’t fall apart in 2016. 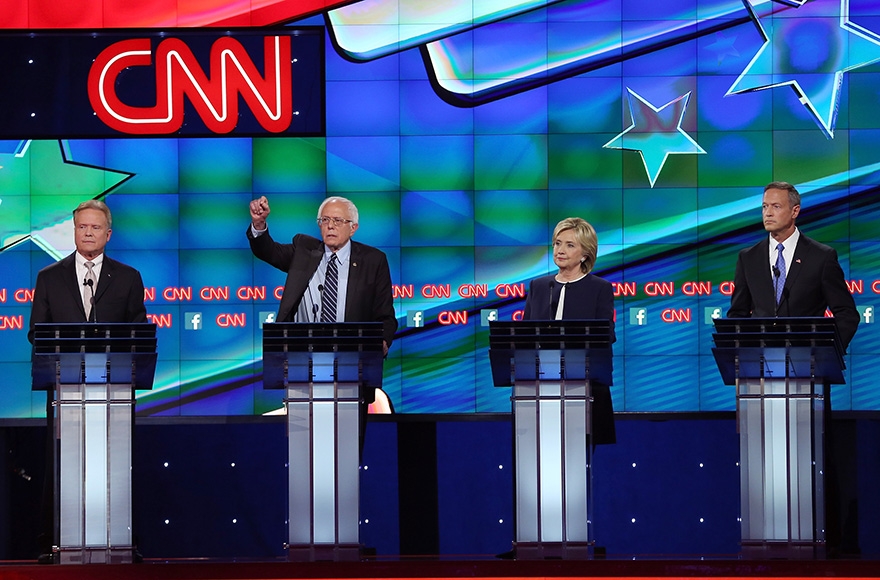 Jewish issues haven’t been front and center this campaign season. But given the unpredictability of this convention-defying presidential campaign, anything can happen.

A flare-up in the Middle East or a comment from Donald Trump could change things in an instant. And once the country’s biggest Republican donor, conservative pro-Israel stalwart Sheldon Adelson, picks a favorite, Israel may become a more prominent campaign issue.

Looking ahead to November, the big question is whether Republicans can make a deeper dent in the American Jewish tendency to vote overwhelmingly Democrat. The Republican presidential candidate received 22 percent of the Jewish vote in 2008 and 31 percent in 2012. And that was against a Democratic nominee, Barack Obama, whom the Republicans frequently portrayed as bad for Israel.

It will be harder to tar Hillary Clinton, the likely Democratic nominee, as weak on Israel, making it more likely that the Republicans lose ground with Jewish voters come November.

Of course, if Bernie Sanders, the Brooklyn-accented Jewish senator from Vermont — an avowed Democratic socialist — somehow manages to win the Democratic nomination, all bets are off. 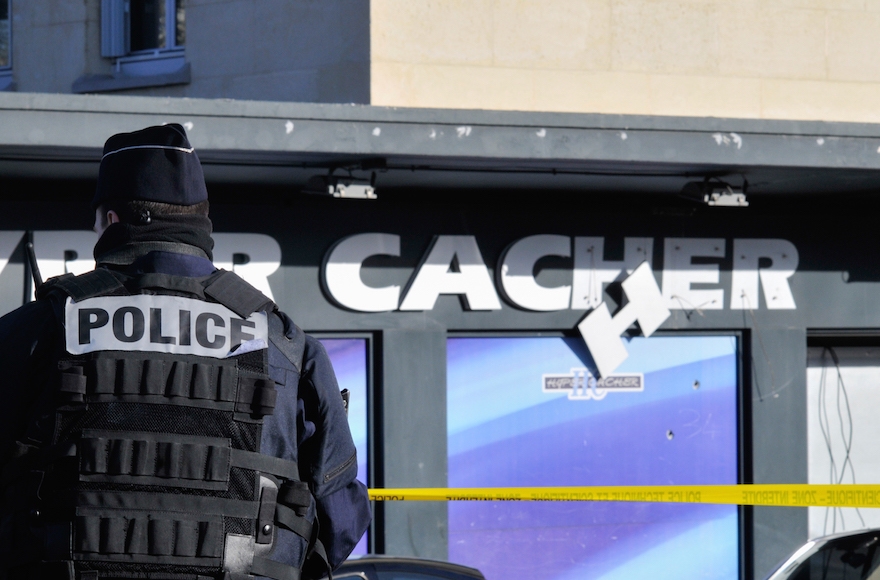 A police officer standing guard outside the Hyper Cacher kosher supermarket in Paris, where four Jewish men were murdered when held hostage by an Islamist gunman, Jan. 11, 2015. (Serge Attal/Flash90)

Surely most European Jews would like nothing more than for 2016 to be a fresh start after a year that saw a rash of deadly terrorist attacks and a surge in Muslim migration to the Middle East.

But with Europe still struggling to mount an effective cross-country counterterrorism strategy, and desperate refugees still willing to chance the risks of crossing the choppy waters of the Aegean Sea to escape war and violence in their home countries, Europe’s challenges are likely to stretch into 2016 and beyond.

Until now, the consequences for Europe’s Jews have been felt most sharply in France, which experienced two major terror waves in 2015 (one of which targeted a kosher supermarket) and sent a record number of immigrants to Israel. But Jews elsewhere are worried, too. In Germany, which took in a record 1 million asylum seekers last year, Jews are worried about what a massive influx of Arabs could mean for local Jews and Germany’s relationship with Israel.

European countries already are taking steps to make it more difficult for migrants to enter or settle in Europe, and law-enforcement agencies are stepping up their counterterrorism measures. But nobody expects a quick or easy salve to either of these challenges.

A house in the West Bank village of Duma, near Nablus, where three members of a Palestinian family, including an infant, were killed, July 31, 2015. (Flash90)With the new year bringing news of the arrests of two Jewish suspects in the case of the deadly firebombing of a Palestinian home last July in the West Bank village of Duma, it seems the problem of Jewish extremism is no longer being swept under the rug.

For years, critics have lamented the lax response by Israeli authorities to Jewish extremism, with fewer than 2 percent of Palestinian complaints submitted to the Israel Police leading to an effective investigation, arrest and conviction, according to the Israeli human rights group Yesh Din.

But with these new arrests — the first since 2008 despite at least 15 incidents of Jews firebombing Palestinian homes in the West Bank, according to Israeli media reports — Israel is signaling that it is taking a harsher approach toward Jewish extremists. After the Duma attack, Israel began applying the controversial practice of using administrative detention — a practice that allows the holding of terrorism suspects without charges or trial — toward Jewish suspects, not just Arab ones.

It remains to be seen, however, whether the crackdown on Jewish extremists will last or whether it will provoke a backlash that will embolden Israel’s far right.