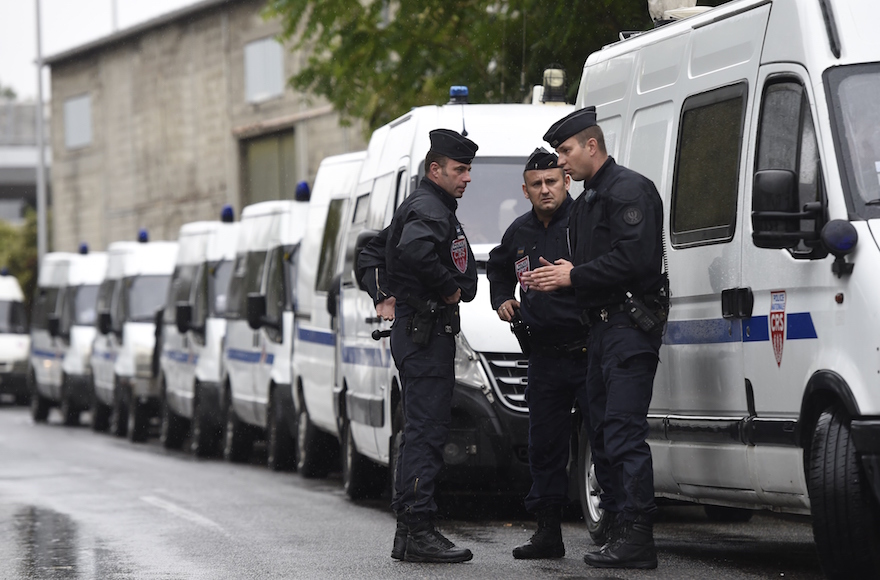 Six soldiers, posted here to defend Jews in this heavily Muslim and crime-stricken municipality bordering the capital, are the first new faces in years in this dwindling community, which has lost thousands of congregants over the past two decades to Israel and safer areas of Paris. On some mornings, the troops outnumber worshippers.

That wasn’t the case when Abenaim first arrived at La Courneuve’s Ahavat Chalom synagogue in 1992. There were over 4,000 Jews in the neighborhood then and it was a struggle to fit them all into the synagogue on Yom Kippur.

“The shul overflowed onto the street,” Abenaim recalled.

Since then, improved economic fortunes and repeated anti-Semitic attacks have driven out all but 100 Jewish families from the neighborhood, where drug dealers operate openly on streets that residents say police are too afraid to patrol. The remaining Jews are mostly a graying bunch, stuck here for financial reasons.

“We have two big problems, extremism and criminality, and they often mix,” said Abenaim, who lives in Paris’ affluent and heavily Jewish 17th arrondisement and has encouraged his congregants to leave for Israel. “I understand why people don’t want to raise children here. I’m here myself only because of my duties. Otherwise, I’d be in Israel.”

La Courneuve’s reputation for criminality is well established and reflected in the security measures at Ahavat Chalom, which resembles a fortress with its heavy metal doors, multitude of security cameras and three armed soldiers in military camouflage at the entrance. For years, the city has ranked among the most violent in France, with 19 assaults per 1,000 residents recorded in 2013.

On street corners near the city center, gangs of young men openly exchange drugs for cash. By noon, prostitutes are soliciting clients on Pasteur Boulevard, a main traffic artery.

Near the synagogue, a group of men wearing colorful sports clothes stand around smoking cigarettes and marijuana on a Monday morning. One of them, a native of the Caribbean island of Saint Martin who identified himself only as Degree, said he felt safe “to do whatever here” because “police won’t come here, they’re too scared. If they come, we just kill them.”

Religious extremism is more difficult to measure, but its effects are nonetheless evident. Last month, La Courneuve became the final resting place of Samy Amimour, one of the suicide bombers who killed 130 people in multiple coordinated attacks in Paris in November and whose family lives nearby.

Security around the synagogue was beefed up following those attacks, but the soldiers were already in place. Their presence is part of Operation Sentinel, launched in response to the January 2015 murder of four Jews at a kosher supermarket in Paris. Ahavat Chalom, which in 2002 survived a fire sparked by four firebombs, is considered especially at risk.

Over the past 15 years, such attacks have spurred many Jews to leave poor Parisian suburbs like La Courneuve in favor of safer neighborhoods, according to Bernard Edinger, a Paris-based former senior correspondent for Reuters.

“Tens of thousands changed neighborhoods, pushed by the hostility of their Arab neighbors or drawn elsewhere through social mobility,” Edinger wrote last month in The Jerusalem Report.

Aubervilliers, a municipality adjacent to La Courneuve, once had three synagogues and many kosher shops. Today there is one synagogue and kosher food is available on one shelf at a regular supermarket, according to the Tribune Juive weekly.

Sammy Ghozlan, founder of the National Bureau for Vigilance Against Anti-Semitism, a nongovernmental watchdog group, said that while immigration from France to Israel has reached record levels, it only accounts for about 15,000 people over the past decade. Many more French Jews have been internally displaced, Ghozlan said, moving farther from Paris or into the city’s wealthier neighborhoods.

Abenaim said he has seen this happening before his eyes. Congregants from La Courneuve have left the area and settled near Abenaim’s home in the 17th arrondissement, which had no synagogues 30 years ago and now boasts no fewer than eight.

Meanwhile, La Courneuve has seen a proliferation of Islamic schools and apartment-size mosques located deep in the maze of drab public housing projects. One of the mosques was a synagogue in the 1960s, when the first Jews arrived here as refugees fleeing the war in Algeria. The 1962 arrival of 4,000 French Jews gave the name to one of La Courneuve’s main projects, now known as the City of 4,000.

Alain Felous, a French Jewish photographer, moved to La Courneuve in 1996 for the low rent and proximity to his workplace and children, who live with their mother in Paris. To protect himself, he has adopted a tough attitude and taken to wearing bulky coats in all weather to signal that he might be armed.

“Of course I’d rather live in the 17th, or someplace nicer,” Felous said. “I’m not here to make a point. Living here as a Jew isn’t for everyone.”

On a trip to the supermarket, Felous paid for the apples of a fellow shopper, an elderly Arab woman with whom he cracked a few jokes. But he was also on guard, kicking the shopping cart of a fellow shopper who had cut him in line while delivering a juicy curse.

“You have to respond immediately here,” Felous said, “or they will eat you alive.”