For a controversial getaway, try Airbnb in a Jewish settlement 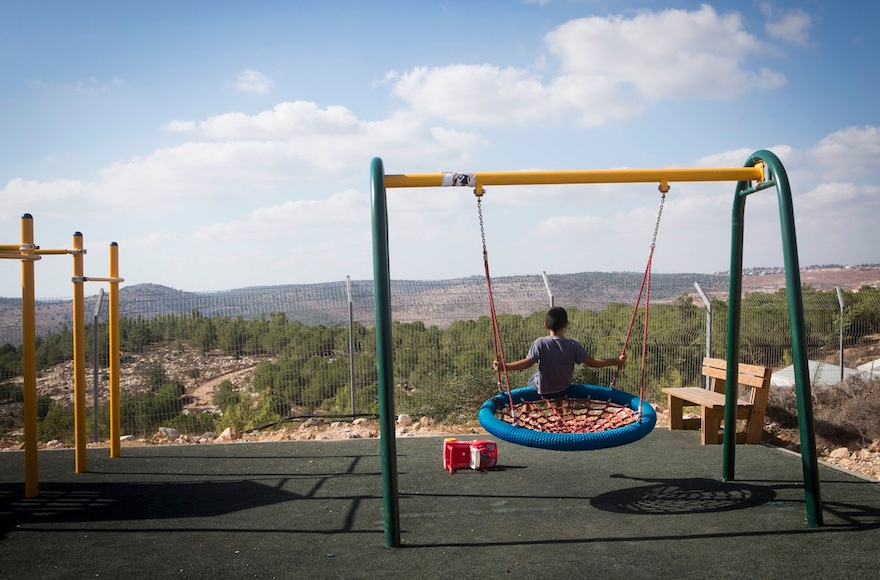 Children playing in the streets of the settlement of Gevaot, Sept. 2, 2014. (Miriam Alster/Flash90)
Advertisement

Are you looking for a unique Airbnb experience?

If you’ve already rented the tree house in the Nicaraguan Jungle, the castle in Scotland, the life-sized boot in New Zealand and the igloo an Austria, there’s another option: a settlement outpost in the West Bank.

You can choose from more than 300 listings in what Airbnb categorizes as both the West Bank and Judea and Samaria, the term preferred by settlers. From a trailer in Nokdim to a yurt in Tekoa, more and more settlement properties have been popping up on Airbnb in recent months. With the more rustic listings available for as little as $16 a night, there are also more luxurious options, like a seven-bedroom home in Neve Daniel that rents for $500 a night.

All these homes are several miles east of the Green Line, Israel’s pre-1967 border, hence the outcry from human rights organizations, which have called on Airbnb to remove the listings from its website. They argue that the company is profiting from “stolen Palestinian land.”

Jewish Voice for Peace is among at least five organizations petitioning Airbnb over the properties, which are listed on the travel site as being located in Israel. The international community considers the West Bank occupied Palestinian land. Captured by Israel from Jordan during the Six Day War in 1967, the territory is now home to more than 600,000 Israeli citizens.

“Airbnb’s anti-discrimination policy states that they prohibit listings that promote racism, discrimination, or harm to individuals or groups, and require all users to comply with local laws. Yet, listing vacation rentals in illegal settlements promotes structural discrimination, theft of Palestinians’ land, and direct violations of international law. Through earning fees from settlement vacation rentals, Airbnb is directly profiting from the continuing occupation and dispossession of Palestinians.”

In media statements, Airbnb said, “We follow laws and regulations on where we can do business.”

The international criticism comes at an inconvenient time for Airbnb. Earlier this week Human Rights Watch released a lengthy report detailing how companies operating in settlements contribute to and benefit from “an inherently unlawful and abusive system that violates the rights of Palestinians.”

A day before that, Israel’s largest trade partner, the European Union, stated that all of its agreements with Israel must note that they do not apply to the West Bank and the Gaza Strip.

Yet according to the settlers renting out their homes on Airbnb, their properties are no different than any others in Israel.

Ronit, who preferred not to provide her last name, had listed her home in Kedar on Airbnb until earlier this month. “I don’t see it as being separate from Israel,” she told JTA. Over several months, she said, she hosted many tourists who chose her house “instead of sleeping in a hotel in Jerusalem.”

Itzhak Levit, who rents out his home in Tekoa – a settlement that saw a stabbing attack on an Israeli woman this week — said he has had dozens of guests in the eight months since he started using Airbnb. About two-thirds of his visitors have been Israelis who were visiting their families in the area, he said, with the rest tourists from all over the world who came to the West Bank for a “beautiful, different experience.”

“I think they understand that they can enjoy a unique experience in our area,” said Levi, mentioning several historical sites nearby, including Herodium and the Haritun Cave. “Tekoa is a unique settlement, combining different types of people from the left, right, secular and Haredi communities,” he added.

Asked if he warns guests of the security situation of late, Levit said, “I’m not sure living in Tel Aviv, Chicago or Paris is any safer than living in Tekoa. In Tekoa we have no rape, armed robbery or homicide.”

When visitors express concerns, he said, he tells them he feels complete safe in Tekoa.

“Tekoa is in Area C, under full Israeli control,” he said. “We rely on the IDF, which is doing their job. And we have our local security.”