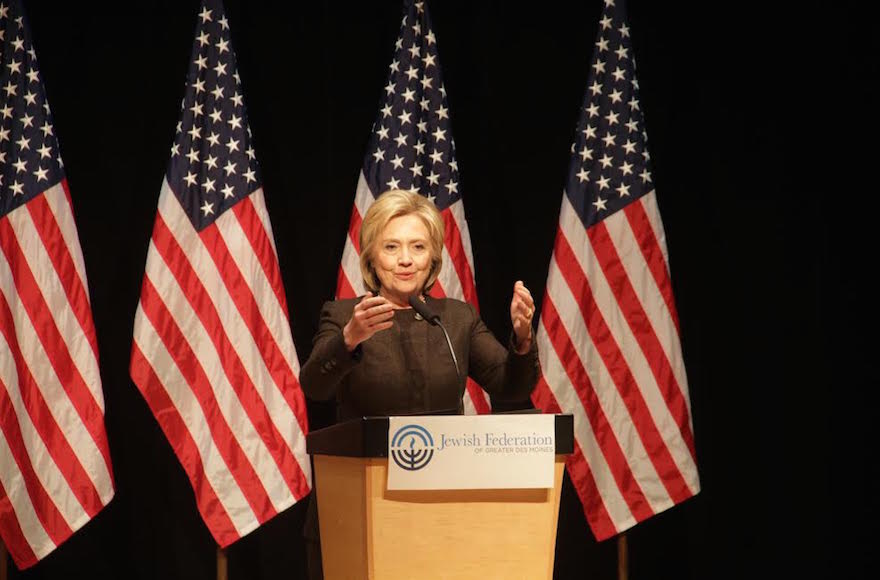 Speaking Monday before a crowd of 150 at the Jewish Federation of Des Moines, Clinton also insisted that amiable relations between the two countries “has to be understood in our national interest.”

“Israel needs a strong America by its side, and America needs a strong and secure Israel by our side — to have an Israel that remains a bastion of stability and a core ally in a region of chaos,” Clinton said.

Clinton’s 18-minute address, her first at a Jewish institution in Iowa, one week before the caucuses here was disrupted by an early coughing fit that left her voice hoarse for the bulk of the speech.

The former senator and secretary of state also called on Palestinian leaders to condemn the incitement to violence in the region, invoking the American yeshiva student Ezra Schwartz, who was killed by a Palestinian gunman last November.

Clinton refrained, however, from condemning Palestinian leaders, insisting that PLO Chairman Mahmoud Abbas “has never stopped cooperating with Israel on security, even when there have been outbursts of terrorism.”

She said her administration would be committed to working with Abbas rather than push for a shake-up in the leadership.

“I am cautious about doing anything that would disrupt the existing status quo,” Clinton said.