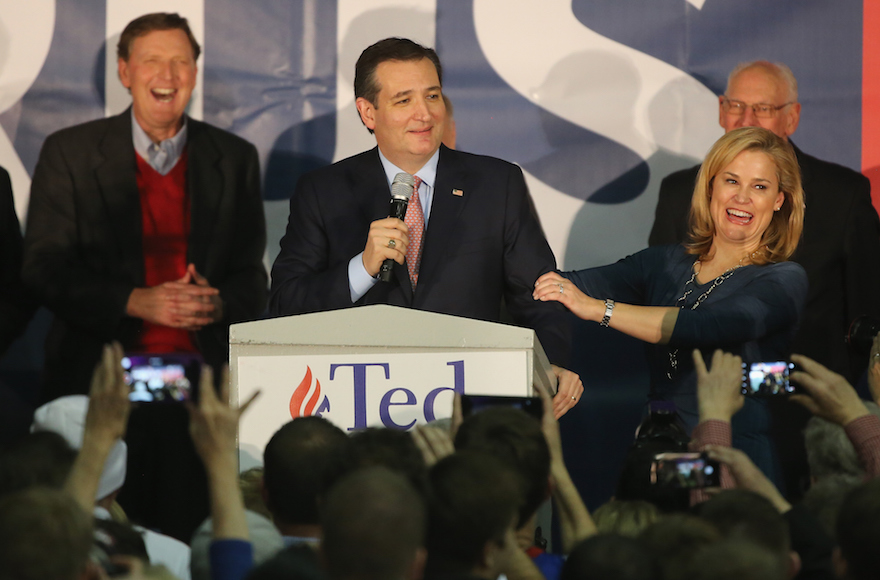 Sen. Marco Rubio, R-Fla., performed unexpectedly well, competing with Donald Trump for second place. Rubio had for a time languished low in the polls along with other establishment candidates. Trump and Cruz are competing for the insurgent, anti-establishment vote.

Sanders was 0.3 percentage points behind Clinton with 90 percent of the Democratic delegates chosen just before 11 p.m. Eastern time; the Vermont senator had 49.5 percent of the vote, and the former secretary of state had 49.8 percent.

Cruz and Rubio have worked hard to cultivate the pro-Israel wing of the party; both candidates are favorites of Sheldon and Miriam Adelson, the Las Vegas-based billionaire couple who are leading powerbrokers in the Republican Party and the pro-Israel community.

READ: Bernie Sanders or Hillary Clinton? How the Jewish celebrity vote breaks down

Several news organizations named Cruz the winner just past 10:30 p.m. Eastern time, as he led with 28 percent of the vote, while Rubio and Trump hovered around 24 percent.

Trump’s humbling will come as a relief to broad sectors of the Jewish community. Liberal groups reviled Trump’s broad, derogatory generalizations about Muslims and Hispanics, while conservative Jews were unsettled by his claim that Israel may lack “commitment” to making peace with the Palestinians.

Sanders, who is Jewish, is leading in polling ahead of the Feb. 9 primary vote in New Hampshire, the next early nomination state. If he secures an Iowa win, he could claim momentum for a campaign that was once perceived as hopeless against Clinton, the front-runner in national polls.

Sanders has run mostly to the left of Clinton, focusing on economic issues and attacking her ties to Wall Street. Clinton has focused on her experience, including in foreign policy, where she has played up her role in shaping last year’s Iran nuclear deal and her close relations with Israel’s leadership.