New Hampshire Jews trust Bernie Sanders, but voting all over the map 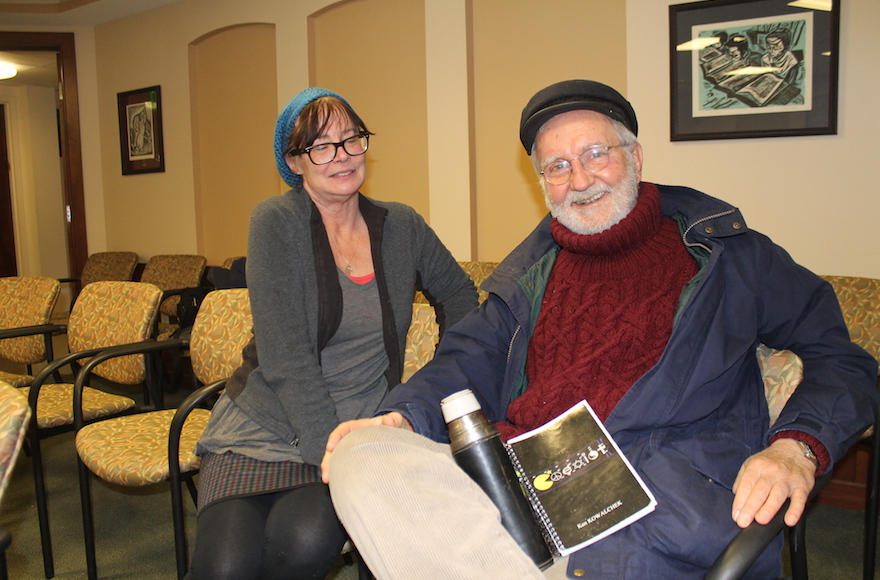 A 71-year-old from Hollis and president of his synagogue in nearby Nashua, Harris isn’t sure who he would support if the general election came down to the two iconoclasts on either side, Donald Trump and Sen. Bernie Sanders.

While the brash real estate mogul running as a Republican and the independent lawmaker from Vermont seeking the Democratic nomination might seem like polar opposites, there are a couple of traits they share that appeal to Harris: their independent-mindedness and their New York bona fides – Trump grew up in Queens, Sanders in Brooklyn.

“There’s certain basic things about people from New York that they have in common philosophically, like liberalism on social issues,” Harris said. “Trump makes these outlandish comments, but a lot of his policies are sort of similar to Bernie Sanders’ policies. I might support Trump in the primary and Sanders in the general election.”

As the Granite State gears up for the nation’s first presidential primary on Feb. 9, America is paying close attention to the political proclivities of this state’s tiny population of 1.3 million. And like their non-Jewish neighbors, the political leanings of the state’s estimated 10,000 Jews are all over the map.

Ken Kowalchek, a Jew from Portsmouth who spent his life in the foreign service until his retirement not long ago, is an independent who plans to vote Republican – either for Sen. Ted Cruz or Ben Carson.

“They’re both brilliant, humble and truthful,” Kowalchek said. “I like Carson’s tax policy of tithing. That’s also in the Torah. I think everyone should contribute something, even the poorest.”

The New Hampshire election makes for great political theater not just because of its place on the primary calendar, but because it’s one of the few states where independent voters – known here as undeclared – can vote in either party’s primary (but just one). With more independent voters in New Hampshire than either registered Democrats or Republicans, that can make for an unpredictable result.

While many independents vote for their favored candidate, some try to game the system by casting ballots for their opponent of choice – aiming to weaken the political opposition to their favored candidate. Roberta, a Jewish voter in her 60s from Swanzey and one of New Hampshire’s undeclareds, says she likes the Democrats but may cast her vote in the Republican primary to help steer the GOP away from candidates she considers extreme.

“I’m not fond of Trump or some of the other leading candidates, so I might vote in the Republican primary,” said Roberta, who asked that her last name not be published to protect her privacy. “In general, I don’t think the Republican candidates reflect the values that I hold. They don’t seem to be open to the needs of ordinary people.”

On the Democratic side, Roberta said she has yet to make up her mind between Clinton, whom she considers “eminently qualified” to be president, or Sanders, whom she says is “an eminently honest man.”

In interview after interview, Jewish Democrats in New Hampshire leaning toward Sanders cited his authenticity as one of his most appealing characteristics.

“I was on the fence between Sanders and Clinton, but after watching the Republican and Democratic debates, the one thing that stood out for me was there was an honest politician and a man of his word on stage, and I haven’t ever seen that,” independent voter Jenny Rosenson said of Sanders.

“Part of me wanted to vote Republican against He Whose Name Must Not Be Spoken,” Rosenson said, indicating Trump, “but I think I want to send my vote to the Democratic Party.”

Asked if she had any concerns about Sanders’ electability in the general election, Rosenson said, “Does he have a chance? Golly gosh, I don’t think so.”

Steve Clayman, a Jewish architect in the Manchester area and a lifelong Democrat, shares that view – which is why he’s planning to vote for Clinton.

“I like Bernie Sanders a lot and I would align myself with a lot of his positions, but I just can’t visualize him as a president, and I can’t visualize him winning beyond New Hampshire, Vermont and a few other areas,” Clayman said. “I think Hillary Clinton has the experience in the political arena internationally as well as nationally, and also is politically astute.

“I’m a little bit disappointed that there isn’t a deeper field on the Democratic side. If it wasn’t for Bernie being there, the discussion would be pretty limited.”

Ron Abramson, a 47-year-old immigration lawyer from Bow, said he’s voting for Sanders – and that his being Jewish has nothing to do with it.

“He feels like a conscience that’s been lacking in our political discourse for a while,” Abramson said. “I’m more drawn to the fact that he was a runner in his younger days – I used to be a distance runner – than him being a Jew. Like me, he’s a pretty secular Reform Jew, and like me he didn’t marry a Jew.”

Sanders’ wife, Jane, is Roman Catholic. His first wife, whom he divorced in 1966, is Jewish.

Joel Funk, a professor of psychology at Plymouth State University, said he’s voting Sanders, too – “not because he’s Jewish, but because his policies are progressive, fair, long overdue and he’s the kind of candidate I feel I can trust.”

David Kochman, 60, of Swanzey, who lost his job two years ago after 26 years at Liberty Mutual and has not been employed since, said he’s voting for Sen. Marco Rubio of Florida – in part because of the Republican candidate’s position on Israel.

“What I really like about him is his leadership and his temperament,” Kochman said of Rubio. “I think he has got the temperament to be president of the United States. I think it’s good that he’s young, Hispanic, has a nice family. And he’s a lot less divisive, frankly, than either Cruz or Trump.”

Kochman said he attended a couple of events with New Jersey Gov. Chris Christie but was turned off by his bluster and the so-called Bridgegate scandal in which Christie’s aides shut down traffic lanes to the George Washington Bridge, creating epic gridlock, as political retribution against a local Democratic mayor.

“It’s not only what happened, but what he did as a leader that made the people who work for him act that way. I didn’t like it,” Kochman said. “Of course, in New Hampshire we would have just knocked down the barriers and driven right through.”